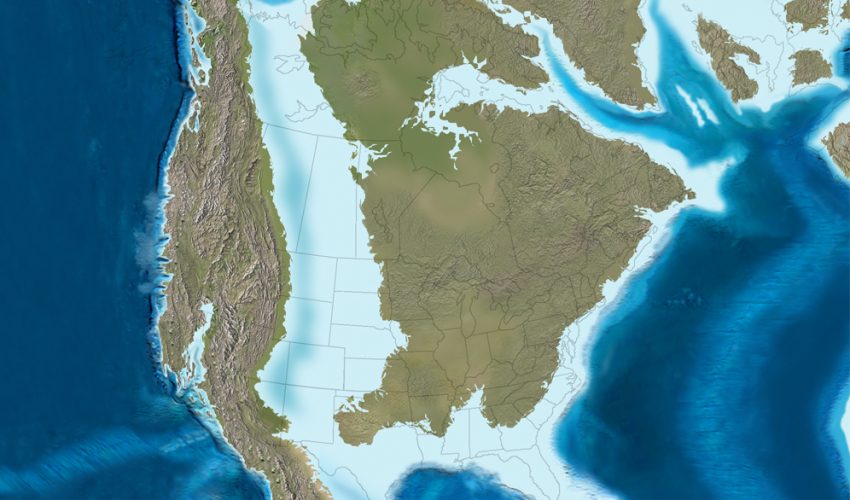 For about a month, I’ve been working on the fossil of an ancient shark.  The shark is in the genus Ptychodus, a name roughly meaning ‘fold teeth’ in Greek.  The name comes from the animal’s strange teeth, designed for crushing shells rather than tearing flesh like classic shark teeth.

The individual I’ve been patiently removing a rock layer from has revealed a strange and twisted face.  Two eye sockets are splayed on either side of plates of rounded, blunt teeth.  The teeth seem to have once been arranged in neat rectangles, though some of the tooth plates seem twisted and a few teeth are scattered around the head.  The whole shark fossil has been flattened and appears as little more than a dark etching in a light stone.  The body inhabits several broken pieces of rock lying next to each other on a table.  A long column of vertebrae stretch back in the same basic arrangement as in a live shark, except for a couple that have dropped out of place, dipping in the middle of the back.  Two fins reveal delicate, hand like cartilage skeleton structures on either side of the body. At the tail there is a section of delicate illuminating skin, but it’s cut short by pieces of rock on either side that simply weren’t collected at the quarry where the Ptychodus was found.

Such is the testimony of the Earth’s past.  Broken rock and distorted fossilized skeleton pieced together with sediment, chemistry, physics, genetics, biology and geology to reveal what we know, what we can know about the planet’s past.

Although my particular shark was found in Texas, the genus Ptychodus was originally discovered in Kansas.  Some may think of corn fields, or Dorothy and Toto, and decide that Kansas is an unlikely place to discover a shark.  But Kansas as we know it now is not even roughly the same place as Kansas of the Late Cretaceous Western Interior Seaway.  The Western Interior Seaway split what is now the United States roughly in half.  The entire states of Colorado and Wyoming were actually underwater at one time.  The middle of Utah and Kansas were on the opposite sides of the sea and most of the south, including all of Texas, was under water.

In the small museum in Hill City South Dakota, attached to Black Hills Institute of Geological Research, I once worked hangs the skeleton of an enormous turtle.  The turtle is suspended from the ceiling, appearing to swim through the air above your head, peering down curiously, tilted head slightly down.  The turtle is a sea turtle and very much resembles living leatherback sea turtle skeletons.  The difference between the turtle in South Dakota of the genus Archelon and modern Leatherbacks is mostly size and distribution.  Imagine that the world’s largest known sea turtle was discovered in South Dakota, a very landlocked state.  The largest Archelon specimen is about 13 feet long and 16 feet wide.  Adult leatherback sea turtles measure about 6-7 feet long and weigh approximately 500-1500 lbs.

Archelon, swam in the same enormous inland sea as Ptychodus.  The sea stretched from the Gulf of Mexico all through Canada into the Arctic ocean, the sea was 2,500 feet deep at its deepest and home to a menagerie of weird and wild creatures.  The Western Interior Seaway was also home to Xiphactinus, another fish I worked on, the genus larger (at 18 feet long) than any known bony fish.  Mostly Xiphactinus looks like a normal fish but with jutting, pencil like teeth that could make the impressionable think twice about swimming in the ocean.

Truly strange animals such as the long snake-necked plesiosaurs, looking like sea dragons from mythology swam through the middle of our continent once.  Pterosaurs, like the famous pterodactyl and swimming birds both fished the Western Interior Seaway.

The Western Interior Seaway was subtropical as far north as Wyoming.  Partially the climate was warmer because the North American continent has moved over time but evidence is strong that the whole world was warmer.  Antarctica wasn’t the entirely ice covered freezer we know but once a place dinosaurs could roam.

The Western Interior Seaway lasted for about 60 million years, longer than the human species, but all things must come to an end and the last we saw of the seaway was 70 million years ago.  Climate change likely dried up the interior seaway and held its waters frozen in the poles.  The history of the earth is one of cycles, not entirely linear, so one may wonder if seaways once ancient may be part of the future as well.  How are you building tomorrow’s ocean?