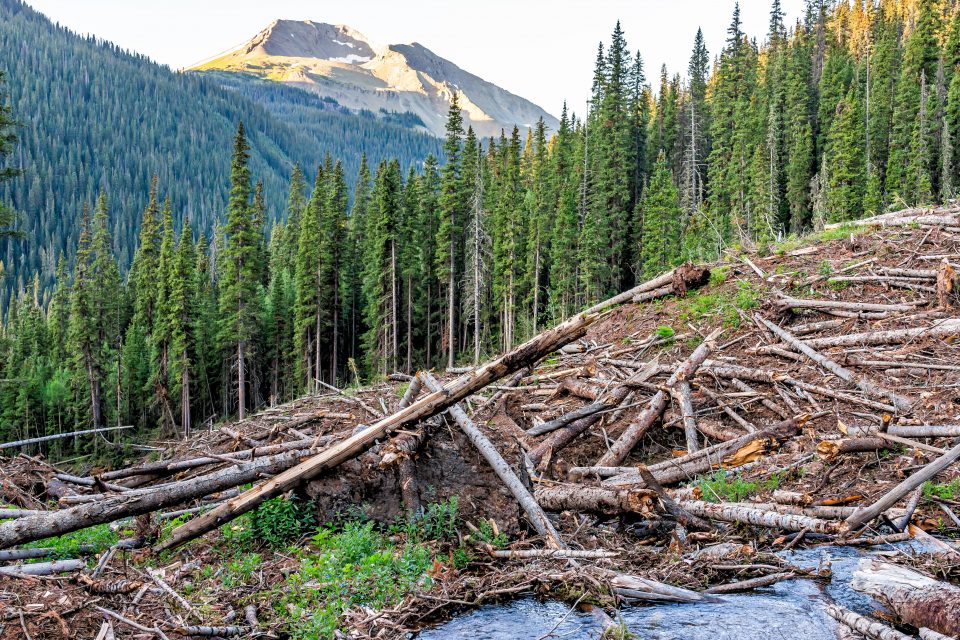 So far this year, severe wildfires in the western United States have burned more than 8 million acres, which is an area larger than the size of Maryland. The affected areas are now facing the threat of destructive debris flows, and USGS scientists are urgently working to gain a better understanding of how and when this type of slope failure occurs.

Debris flows are fast-moving rivers of water, rock, soil, and vegetation that are particularly dangerous because they usually happen with no warning. While landslides typically require prolonged periods of rain and saturated ground, a debris flow can be triggered after just a few minutes of intense rainfall on a dry slope.

The rivers of debris often gain enough power to level everything in their paths, including trees, vehicles, and homes.

In 2018, soon after one of Southern California’s largest wildfires, a half an inch of rain fell in a matter of five minutes across a deforested area of the Santa Ynez Mountains. Debris flows carried an avalanche of mud and boulders into Montecito, where 23 people were killed. Dozens of homes were buried and hundreds more were damaged.

The researchers found that there were major differences in slope failure between the first and the third years after the fires. The results will provide critical insight into when and where debris flows and other types of slope failure are most likely to occur.

“In the first year after each fire, we observed debris flows generated by rainfall runoff,” explained study lead author Francis Rengers. “But as we continued monitoring, we were surprised to see that a storm with a higher rainfall intensity than the first year’s storms, resulted in more than 280 shallow landslides, rather than debris flows, in the third year.”

Rengers explained that severe wildfires make soils more water-repellent, and rainfall tends to run off burned ground. “If water is not soaking in, it’s flowing over the surface.”

Wildfires remove ground cover that would normally serve as a barrier to slow the speed and momentum of a debris flow. According to Rengers, incineration can also allow rainfall on bare soil to create a “surface seal” that further increases runoff.

Landslides are less fluid than debris flows and glide as cohesive mass along a rupture plane.

Because they have much shorter runoffs than debris flows, landslides pose different hazards.

“The landslides we observed would primarily impact local infrastructure in the forest, such as roads, transmission lines, and culverts,” said Rengers. By contrast, he noted, debris flows move sediment much further downstream – posing a major threat beyond the hillslopes.

The findings offer some indication that the threat of slope failure has a limited duration. The researchers found that within five years, the density of landslides on burnt slopes in the San Gabriels was nearly equal to the density in unaffected regions. The evidence suggests that vegetation can recover within half a decade.

“Our model suggests that debris flows will be the primary concern during the next one to two years, at least in the burn scars in Southern California, and after that the concern will shift toward shallow landslide hazards,” said Rengers. “I hope our work offers land managers useful expectations regarding how these processes are likely to evolve and helps them prioritize post-wildfire mitigation and planning.”

The research was presented at the annual meeting of the Geological Society of America, GSA 2020 Connects Online.