Pilot whale dies with 17 pounds of plastic in its stomach • Earth.com 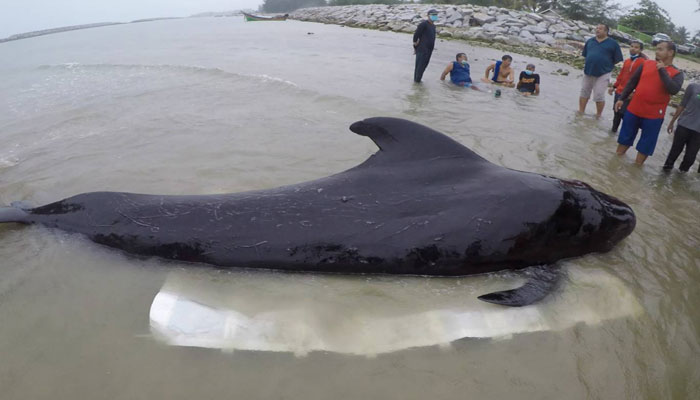 Pilot whale dies with 17 pounds of plastic in its stomach

After days of efforts to save its life, a shortfin male pilot whale has died from ingesting a shocking amount of plastic waste. During an autopsy, veterinarians discovered more than 80 plastic bags in the whale’s stomach, which collectively weighed over 17 pounds.

The whale was seen along the coast of southern Thailand in Songkhla Province on May 28th appearing ill and unable to swim. A team of veterinarians and conservationists worked for five days to save the animal’s life.

Experts say that the bags would have made it impossible for the small whale to digest normal food.

According to the Department of Marine and Coastal Resources (DMCR), the whale began heaving out pieces of plastic bags before dying on Friday.

Jatuporn Buruspat, the head of the DMCR in Thailand, said that the issue of plastic pollution will be brought to the public’s attention during the observation of World Oceans Day on June 8th.

“We will use the whale case and invite all sectors to show their intentions on how to reduce the use of plastic in Thailand,” Mr. Buruspat told Reuters.

A report from the UK, “Future of the Sea: Plastic Pollution,” has revealed that plastic makes up 70 percent of the world’s marine letter and that the amount of plastic in the ocean is set to triple over the next decade.

The document states: “Over 700 species of marine organisms, including marine mammals, birds, fish and invertebrates, are known to encounter plastic debris.”

“This can result in severe physical harm and death, or have more subtle sub-lethal effects on behavior and ecological interactions.”

The European Commission has recently proposed laws to ban and greatly reduce the distribution of single-use plastics in an effort to combat the growing issue of plastic marine litter.