What can octopus brains tell us about human brains? • Earth.com 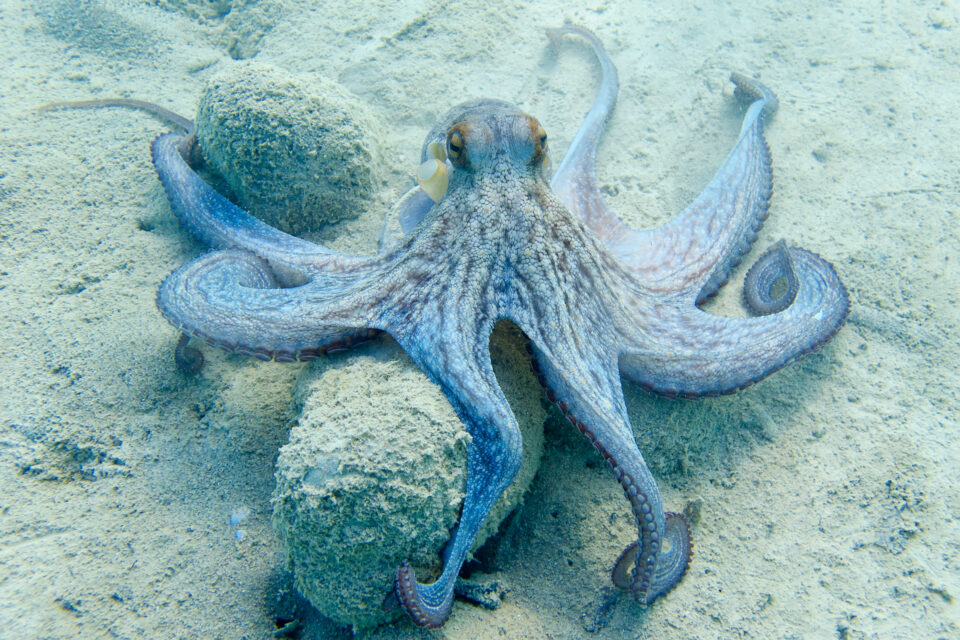 Octopuses are considered to be very intelligent – for invertebrates, that is. Along with other cephalopods, such as cuttlefish and squids, octopuses have the most complex brains and nervous systems of any invertebrate animals. Scientists have often wondered why these mollusks were the only ones to develop more neurological complexity, while this phenomenon characterizes most vertebrates.

Looking way back in evolutionary history, humans and octopuses have a common ancestor – a primitive, worm-like creature with minimal intelligence and simple eyespots. Its descendants subsequently gave rise to the two large branches of the animal kingdom, the vertebrates (with backbones) and the invertebrates (without). While the vertebrates evolved to have large and complex brains with considerable cognitive abilities, the invertebrates did not – except for the cephalopods, that is.

A new study by researchers from the Max Delbrück Center and Dartmouth College in the United States has now uncovered a way in which octopus brains are similar to the brains of higher vertebrates, such as humans. Their findings, published in the journal Science Advances, show that octopuses have a large variety of different genes that code for microRNAs (miRNAs) in their brains and nervous tissue, which is similar to the trend observed during the evolution of vertebrates.

“So, this is what connects us to the octopus!” said study co-author Professor Nikolaus Rajewsky. He explained that this finding probably means miRNAs play a fundamental role in the development of complex brains.

Consisting of no more than 23 nucleotides, miRNAs are small, single-stranded, non-coding RNA molecules that are found in plant and animal cells. They play important roles in regulating gene expression, mostly by targeting messenger RNA molecules and preventing them from leaving the nucleus to be involved in protein synthesis.

In 2019, Professor Rajewsky read a publication about genetic analyses conducted on octopuses. Scientists had discovered that a lot of RNA editing occurs in these cephalopods – meaning that they make extensive use of certain enzymes that can change the coding of their RNA. “This got me thinking that octopuses may not only be good at editing, but could have other RNA tricks up their sleeve too,” said Rajewsky.

He began a collaboration with scientists from the Stazione Zoologica Anton Dohrn marine research station in Naples, who sent him samples of 18 different tissue types from dead octopuses. The research team profiled all the small RNA molecules in these tissues and found a massive expansion in the types of miRNA molecules present, when compared with those in other invertebrates. In particular, 42 new families of the genes that code for miRNAs were present in the octopus tissues.

“This is the third-largest expansion of microRNA families in the animal world, and the largest outside of vertebrates,” said study lead author Dr. Grygoriy Zolotarov. “To give you an idea of the scale, oysters, which are also mollusks, have acquired just five new microRNA families since the last ancestors they shared with octopuses – while the octopuses have acquired 90! Oysters,” adds Zolotarov, “aren’t exactly known for their intelligence.”

Currently, the source and selective pressures for the rise of these novel miRNA genes is not known but, given that they have been conserved during cephalopod evolution, the team concluded they are clearly beneficial to the animals and are therefore functionally important. Further analysis of late stage embryonic octopus cells indicated that many of these novel miRNAs were primarily expressed in nerve cells and tissues, during development. These findings led the researchers to propose that the miRNAs were necessary for, and intimately linked to, the evolution of complex animal brains.

The findings of the team therefore suggest that cephalopods evolved greater brain complexity in the same way as vertebrate brains did, by using a lot more regulatory miRNAs to control gene activity. However, further research is needed to understand exactly how the miRNA molecules work and what they do during neuronal development.

“Since octopuses aren’t typical model organisms, our molecular-biological tools were very limited,” said Dr. Zolotarov. “So we don’t yet know exactly which types of cell express the new microRNAs.” The researchers are now planning to apply a technique, developed in Rajewsky’s lab, which will make the cells in octopus tissue visible at a molecular level.