When the dinosaurs vanished, forests expanded and thrived • Earth.com 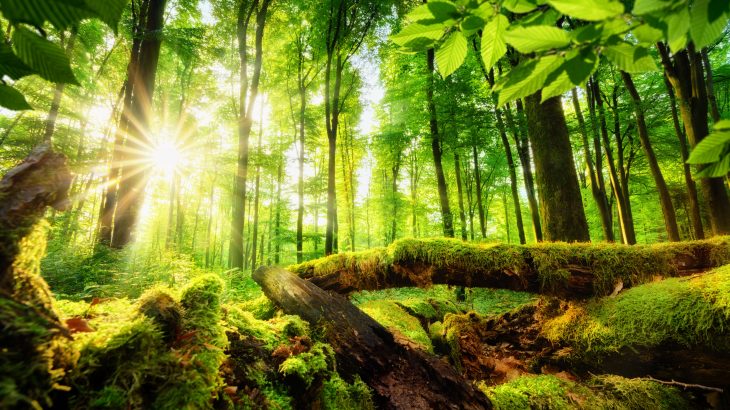 When the dinosaurs vanished, forests expanded and thrived

Forests were expanding and thriving during the disappearance of dinosaurs about 66 million years ago, according to a new study from McGill University. The researchers believe that an increase in terrestrial plants coincided with the loss of large plant-eating dinosaurs.

“We hypothesize the extinction of all large herbivores at the boundary may have facilitated this transition to a terrestrial angiosperm dominated flora immediately after the boundary,” explained the researchers.

While it is widely accepted that a catastrophic asteroid impact was the initial cause of the mass extinction event at the end of the Cretaceous Period, the cascading effects of the impact that may have killed the dinosaurs are not entirely clear.

Drastic climate changes are expected to have played a major role, yet the new study suggests that the climate may not have actually shifted too dramatically. For example, the experts found evidence that changes in precipitation were very short-lived.

“Changes in terrestrial environments across the Cretaceous-Paleogene boundary, including plant ecology and carbon and water-cycling, remain poorly defined,” said the study authors.

To investigate how specific ecosystems were affected, the team analyzed the microscopic remains of plants from this time period. The samples were collected from Canadian river sediments.

“We measured n-alkane carbon and hydrogen isotope ratios in two sedimentary sections and applied established fractionation factors to estimate the isotopic compositions of precipitation and bulk sedimentary organic matter sources. We also analyzed the distribution of n-alkanes as an indicator of the relative abundance of aquatic and terrestrial plants.”

The analysis revealed that in this particular region, local plant communities and ecosystems experienced a long-term shift toward fewer aquatic plants and more terrestrial plants, including a notable increase in birch and elm trees.

The researchers were surprised to find that changes in rainfall patterns during the extinction event were relatively minor and short-lived.

“This could be important as we look to the future of global warming, where many scientists have predicted that changes in precipitation could have big impacts on humans and ecosystems,” said study senior author Peter Douglas.

“At other times of major climate change in Earth’s history we typically do see evidence for such changes. The absence of such a signal during the most recent mass extinction event is intriguing.”

“Surprisingly, scientists know more about what happened in the oceans at the end-Cretaceous extinction than on land. By clarifying the environmental changes occurring during this period, we narrowed down the factors that are likely to have caused the disappearance of dinosaurs.”

“The research also provides an important analogue for environmental changes humans are causing to the planet, and the potential for future mass extinction.”

The study is published in the journal Palaeogeography, Palaeoclimatology, Palaeoecology.