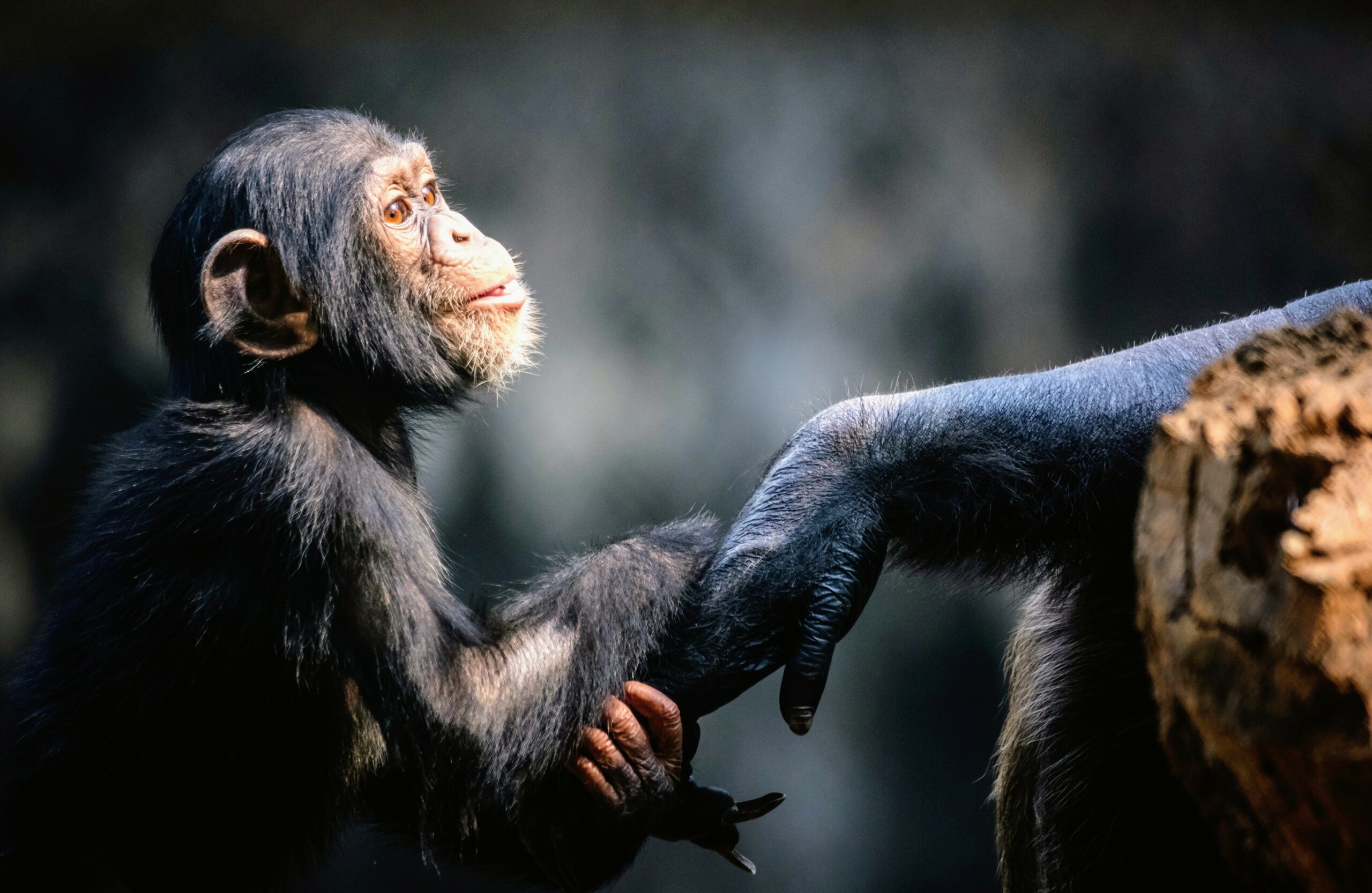 We are all familiar with the joy derived from sharing something noteworthy with a friend or family member. Even young children develop gestures, such as pointing or holding out a hand, to direct a parent’s attention to something interesting. This behavior of “sharing for the sake of sharing” has always been seen as pretty much unique to humans, and not part of the common behavioral repertoire of other primates.

However, scientists have now documented the first instance of a wild chimpanzee appearing to show an object to another individual, apparently simply for the sake of sharing the experience. The report, published in the journal PNAS, contains video footage of Fiona, an adult chimpanzee from the Ngogo chimpanzee community in Kibale National Park, Uganda, showing her mother a leaf during a grooming session.

“People love sharing experiences with each other – social media capitalizes on this trait, and even in our first year of life we start to show others interesting things we’ve found,” said study lead author Dr. Claudia Wilke from the Department of Psychology at the University of York

“It has been suggested that ‘sharing for sharing’s sake’ is a uniquely human trait, but our observation of these wild chimpanzees challenges this,” she explained. “We observed an adult chimpanzee showing her mother a leaf she had been grooming, not because she wanted her to do anything with the leaf, but most likely because she simply wanted her to also look at the leaf.”

“Our observations suggest that, in specific social circumstances, chimps may show each other objects of interest, to share attention about them, and that this behavior may not be unique to humans,” said study co-author Simon Townsend.

While conducting behavioral research on the Ngogo chimpanzees between 2013 and 2020, the scientists recorded many instances of “leaf-grooming.” This occurs during bouts of social or self-grooming, when a groomer plucks a nearby leaf, strokes it and manipulates it with the fingers or mouth as if grooming it, and stares closely at it. The function of this behavior has not yet been explained, although it is hypothesized to be a way of inspecting ecto-parasites, such as lice or ticks, that have been placed on the leaves.

In one instance, however, the video footage records Fiona holding a leaf and stretching out her arm towards her mother as though seeking her mother’s attention. Initially, the mother lowers her eyes to look at the leaf, but Fiona then thrusts the leaf even further towards her mother’s face, requiring the mother to adjust her head to pay full attention to the object. After obtaining the desired attention, Fiona stops gesturing to her mother, withdraws the leaf and continues to groom it.

The researchers examined video footage of more than 80 similar leaf-grooming events in order to rule out other explanations for the behavior. They could not find any evidence that leaf-grooming is related to eating (mostly the leaves are not eaten), or to initiating play behavior or grooming. In more than three quarters of the recorded clips of leaf grooming, chimps sitting next to each other do both pay attention to the leaves being used, but Fiona is the only chimp found to have gestured in order to encourage her mother to take a look.

“She’s not offering it for food. She doesn’t want her mum to do anything. She just wants them to look at it together, and be like ‘Oh, cool, nice!’” said study co-author Professor Katie Slocombe.

It is recognized that chimps use gestures to communicate with others, but this is usually to illicit a specific functional response. “Sometimes when they’re grooming in this community of chimpanzees, they’ll scratch a particular location on their body … and that indicates ‘I want you to groom me here,’” said Slocombe. “If they have their hands out towards something, it means ‘give me that.’”

The researchers say their results are consistent with the argument that Fiona gestured declaratively to show her mother the leaf, and that her gesture led to simultaneous attention to the leaf. This suggests that, in highly specific social conditions, wild chimpanzees, like humans, may be motivated to communicate cooperatively and share interest and attention simply for the sake of sharing.

Professor Frans de Waal, a primatologist at Emory University who was not involved in the work, described the observation as remarkable. “It signifies that chimpanzees, and perhaps also other apes, grasp that other individuals gather information the way they do themselves, and are willing to share information with others without any prompting or rewards or self-serving purposes,” he said.

Slocombe added: “While there is a need to identify further examples of this behavior in chimpanzees, our observations indicate that sharing attention for sharing’s sake is not unique to humans. It has been argued that our ability to share experiences helped us to evolve the cognitive abilities that set us apart from other species, such as our capacity for joint action, cooperation and language.”

“Our observations raise new questions about why humans share experiences more often than our closest living relatives and whether engaging in this behavior at a higher frequency than other species can still explain the evolution of cognitive functions underpinning human social behavior,” she concluded.