The last of the woodland caribou relocated from the contiguous U.S. • Earth.com 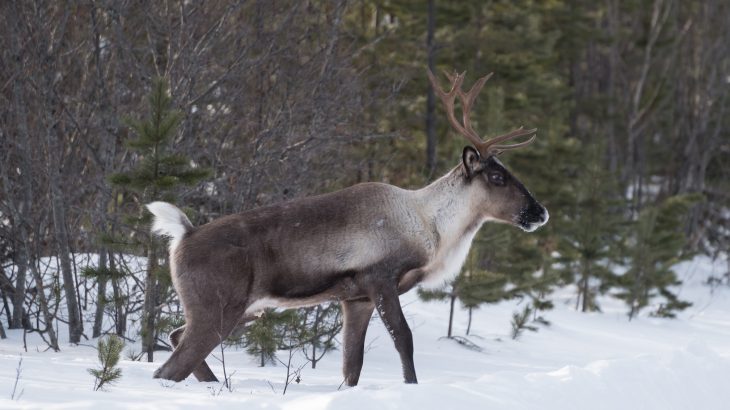 The last of the woodland caribou relocated from the contiguous U.S.

Caribou (Rangifer tarandus) are the only species of the deer family in which both males and females grow antlers.  Caribou are a species of wild reindeer native to the most northern parts of the globe, from North America to Asia and Europe.  That’s not the whole story though, because depending on the opinion of the scientist, there may be as many as seven subspecies of caribou and at least five.

In most people’s minds, the caribou is an animal of the barren tundra of the arctic, but with some subspecies, their native range extended further south.  Yes, some caribou live their entire lives in the far north, but other caribou have ranged as far south as Washington State, New York and Minnesota. These southernmost caribou are the woodland caribou, a subspecies adapted for living in forests.

The woodland caribou are also larger and darker colored than their more northern relatives.  These caribou have different migration patterns, some populations move very little through the year.  Other herds wander widely but seem to show little migration patterns. Some migrate long distances between forests and tundra annually.  For a long time, the woodland caribou was the only chance for someone to see the iconic deer in the lower 48 states. Sadly, woodland caribou living in a habitat closer to human population densities is also more threatened.  The woodland caribou has been protected as endangered in the United States since 1983. Unfortunately, designated protection under the law doesn’t always safeguard a future for animals in the real world.

Woodland caribou eat lichen as a major source of food.  Lichens only grow in large numbers in old growth forests.  Defenders of Wildlife estimates that it takes 80 to 150 years for a forest to grow enough lichen to support caribou.  This need for old growth forest leads the caribou into conflict with logging. Even ‘sustainable’ wood harvesting can threaten an animal that requires a forest at least 80 years old for survival.  Caribou are generally shy and are disturbed by every day human intrusions like roads. These things combined with recreation put pressure on caribou in the continental US.

In 2009, surveys found 50 individual mountain caribou in the Selkirk herd.  Less than a decade later in 2016, the numbers were tallied at 12 individuals in the herd.  Last year, the National Resource Defense Council reported that there were only three female caribou remaining in the Selkirk herd.  Just three days ago, High Country News reported the inevitable end of this slow decline.  The last caribou of the Selkirk herd was captured and moved to a breeding facility in Revelstoke, British Columbia.

Other herds have disappeared before.  One herd was observed to decline in Banff National Park, Canada until the population was small enough that the last members disappeared in an avalanche in 2009.

The upside to the tragedy of a lost herd of caribou is lessons learned.  It’s quite obvious that woodland caribou would need old growth woodlands but human societies can be slow to learn.  Efforts to protect the remaining woodland caribou are already underway in Canada and those in Alaska are protected. Breeding programs now hold out the potential hope of reintroduced caribou someday roaming throughout the northern continental US again.

Revelstoke Caribou Rearing in the Wild is the organization where the last member of the Selkirk herd of mountain caribou will hopefully be bred successfully.  The organization reports on populations of all the mountain caribou herds. The numbers of these herds as a whole declined sharply around 2002 and have continued to spiral downward.  The herd near Revelstoke was made of roughly 210 caribou in 1994 but was down to about 120 in 2011. The caribou in the area around Revelstoke have been researched heavily since the 1990s and their decline is well documented.  Other herds have shown similar declines and the breeding program at Revelstoke focuses on calf survival as a way of growing populations.

The declines in wild caribou herds are caused by habitat destruction, changing predator-prey dynamics, and other disturbances caused by humans.  All caribou herds have been moving more northward, which often causes populations to fracture and become smaller and more isolated, creating genetic problems.  Greater survival of calves can help solve some of these problems but only if habitat destruction is halted and perhaps reversed in some ways. Without the habitat caribou need, they won’t survive.

High Country News reported in 2016 that there were only about 1,000 mountain caribou left all-together.  The cause is largely from industrial logging in much of the Caribou’s habitat. Conservation money focuses on things like breeding programs, without taking on big lumber that destroys the caribou’s home; a quixotic effort.  Other protections implemented include culling wolves, a natural, native predator of caribou and limiting snowmobile recreation in parts of the caribou range.

The British Columbian government implemented the Mountain Caribou Recovery Implementation Plan (MCRIP), which enacted protections but failed to limit logging in caribou habitat.  The forests the caribou depend on – interior temperate rainforest – are made of large stretches of unique, old growth trees. Some of that forest is protected in places like the Bob Marshall Wilderness Area in the US or Banff National Park in Canada, but with wide ranging animals like caribou, enormous forest is required.  Another problem is that even in National Forests within the US, logging is allowed, even if managed to be sustainable.  When old growth is needed, this model does no favors to the caribou.

In the end, if habitat destruction isn’t stopped, captive bred populations of mountain caribou may just end up supplying another exhibit at the zoo.