Protection of Yellowstone Grizzly Bears has been upheld by the court • Earth.com 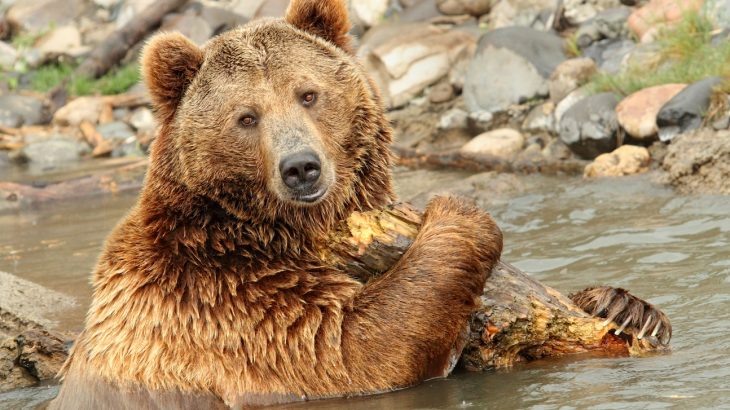 Protection of Yellowstone Grizzly Bears has been upheld by the court

Recently, I wrote about the decline of bears throughout the United States, all bears but most importantly Brown (or grizzly) bears.  The story I wrote was connected directly to Yellowstone area brown bears being removed from protection under the Endangered Species Act. But USA Today reported on Monday that the decision by the U.S. Fish and Wildlife Service to remove protections of Yellowstone area bears has been overturned.

Chief District Judge Dana L. Christensen of Montana ruled that the decision to remove protection from the bears was “arbitrary and capricious”.  Much of the judgment is based on genetic science. The judge said that the change in status of Yellowstone Grizzly bears fails to take into account the effect on other bear populations in the area.

Indeed, bears from the Yellowstone area and the area of Glacier National Park have been ranging far and may possibly soon come into contact with each other, the Independent reported last year.  Furthermore, there is a greater hope by some organizations that bears from Yellowstone may be again connected with their kin as far north as the Yukon at least genetically.  Different bear populations interbreeding increases the genetic resilience of both populations and of the Grizzly Bear as a species overall.  The judge’s decision on this case is a nod towards the great hope of truly restoring the Grizzly Bear to western North America.

This decision comes in as a victory for environmentalists trying their best to push back against agencies and an administration intent on dismantling wildlife protections.  The fight over protection of bears in Yellowstone is part of a larger fight for the protection of wild animals throughout the U.S., especially predator species like grizzly bears and wolves.

The Center for Biological Diversity reported in March of last year in a press release on the removal of protection on bears and wolves in Alaskan National Wildlife Refuges.  The protections had been put into place by the Obama administration to override predator control techniques approved of by the state government of Alaska.  Techniques now allowed include shooting bears from aircraft, poisoning and trapping as well as killing during denning season.

The change in protection rules in Alaskan National Wildlife Refuges came down to a vote of the senate under the Congressional Review Act.  This action combined with the attack on bears in the greater Yellowstone area shows a disdain by the ruling party for wildlife, especially potentially dangerous wildlife.

In places like Alaska and the western US where many of the residents and voters are hunters and ranchers, there’s a lot of political pressure behind predator control ideology.  Alaska seems to prioritize hunting in their public lands over wildlife itself, especially predatory wildlife. Not only does allowing predator control increase the hunting of bears, it allows prey animals such as caribou to expand beyond normal measures and thus increase hunting of them as well.

What matters for now is that the bears are protected in Greater Yellowstone, even if they face more predator control in Alaska where state laws protect them in various ways but not as vigorously as the rolled back federal protections.

The idea of controlling predators isn’t very sound scientifically speaking in the first place.  Predator populations have been shown to increase and decrease proportional to the populations of their prey base.  Removing predation can also problems in prey populations, allowing unchecked growth and population crashes. The US Fish and Game were claiming that the population of Grizzly Bears in the greater Yellowstone ecosystem had reached Its carrying capacity and needed to be culled but this claim is bogus.

Treating greater Yellowstone like a closed system while it is actually a tiny piece of the grizzly bear’s former range is ludicrous.  For many environmentalists, myself included, the idea of bears spreading out from Yellowstone and inhabiting the mountains, hills, prairies and forests of the western US is wonderful.  There is no scientifically sound basis for treating the Yellowstone area as a bear habitat and the surrounding areas as something else. Historically Grizzly Bear range covered most of western North America.

Early in the history of US wildlife management culling predators was part of normal procedure and rarely criticized.  Among hunter conservationists like Teddy Roosevelt, there was even a distinction made between sportsman-like hunting practices and predator control, where all means were employed.  With hunting, Roosevelt and other conservationists of his day stressed a certain unwritten code of conduct, with principles of sportsmanship involved. When it came to controlling predators, the former president was much more ruthless.  Roosevelt spent time killing many predators himself but throughout his life his views changed. In an article about predator control in Yellowstone, the National Park Service sums up his evolving viewpoint:

“Roosevelt referred to wolves as “the beasts of waste and desolation.” In this same book, Roosevelt depicted cougars as “bloodthirsty” and “cowardly” predators with a “desire for bloodshed which they lack the courage to realize.” Yet despite his depiction of predators as destroyers of cattle and wildlife, Roosevelt was a careful student of predators and their natural behavior. As he spent more time studying predators in their natural setting, his attitudes toward their role in nature began to change, so much so that by 1908 he ordered predator control of Yellowstone’s cougars be stopped in order to allow these predator populations to curtail growing elk populations. This change in Roosevelt’s perspective toward Yellowstone’s predator population was influenced by several factors, including his goal of establishing a wildlife reserve in Yellowstone, his personal interest in hunting, and his increased understanding of the role of predators in an ecosystem.”

This change in heart about predator control was also mirrored in Aldo Leopold, one of the fathers of the modern science of wildlife management.  Leopold spent some of his younger years actively involved in killing predators like wolves involved with the same agencies that were actively trying to eradicate bears from much of the American west.  In one of the more famous tales of wildlife conservation, Leopold watched a wolf die and saw in the wolf’s green eyes an epiphany.

The shift in opinion on predator control is clearly not unanimous among even wildlife professionals but it seems that the overall consensus has shifted.  A federal judge recognizing that the evidence as presented favors those with no interest in curtailing bear populations or ‘controlling’ predator populations is a step in the right direction.  Still, states like Alaska, Wyoming, Idaho and much of the west have views antithetical to allowing predators and prey to reach a natural balance. Hunting is often prioritized over healthy wildlife populations and the wildness of natural systems.

If we want this legal victory to be a long term one, views but also laws will need to change to formally recognize the rights and standings of other animals.  Recognizing formally that we share this planet, not rule would be a step in the right direction. For now we should celebrate that bears in Greater Yellowstone are protected which makes all Grizzly Bears just a little bit safer.