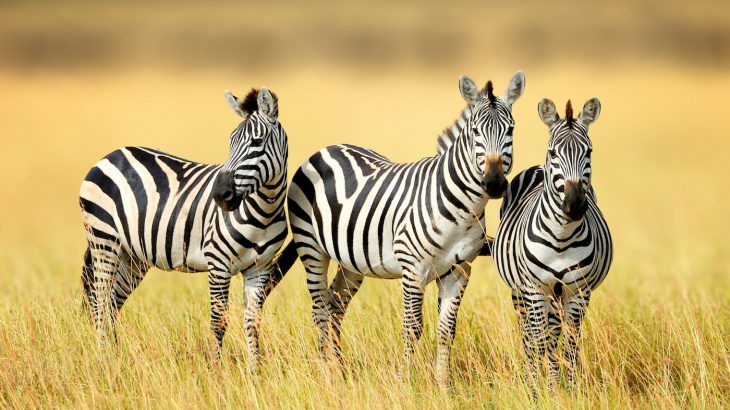 Why do zebras have such distinctive stripes? New research shows that a zebra’s black and white stripes are just one part of a cooling mechanism that helps regulate body temperature.

It’s long been thought that the zebra’s coat has something to do with keeping it cool.

But now for the first time, researchers Alison Cobb and zoologist Dr. Stephen Cobb have discovered how after having the chance to study wild zebras in their natural habitat near the equator.

The two reported their findings in a new study in the Journal of Natural History.

Allison and Stephen Cobb monitored and collected data from two zebras, a stallion and mare, in Kenya.

Throughout different parts of the day, the researchers took temperature readings on the different stripes of the zebras and examined the sweat of the animals.

Latherin makes sweat frothy which in turn speeds up evaporation.

In this study, the researchers found that zebras can raise the hair on their black stripes, proving that there is more to the zebra’s temperature control than just coat color.

“It was not until years later that we got the opportunity to collect some field data from zebras in Africa, when we also noticed their ability to raise the hairs of their black stripes, while the white ones lay flat,” said Allison Cobb, the lead author of the study. It was only much more recently, when the role of latherin was discovered in helping horses sweat to keep cool, that it all began to fall into place.”

During the middle hours of the day, the researchers recorded temperatures on the black stripes that were 12 to 15 degrees Celsius hotter than the white stripes.

The researchers also tested the temperatures of a zebra hide that was left out in the sun and found that the black stripes continuously heat up, whereas on the living zebras, the black stripes stopped heating up at a certain point.

It’s the three components, latherin in the sweat, the stripe colors, and the hair raising that work together to keep the zebra cool.

The air flow throughout the zebra’s coat may also help keep flies from landing on the zebra to bite them.

“The solution to the zebra’s heat-balance challenge is cleverer, more complex and beautiful than we’d imagined,” Allison said. “Of course, there is much more work to be done to gather evidence and fully understand how the stripes help zebras control temperature, but I am 85 now, so that’s for others to do.”