All About the Mysterious Alpine Ibex • Earth.com 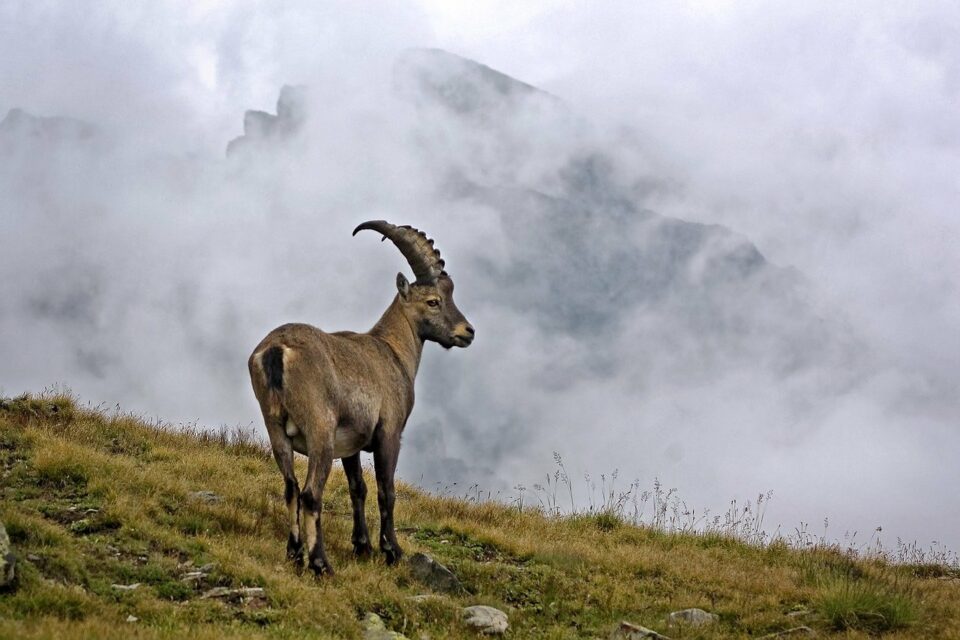 All About the Mysterious Alpine Ibex

The alpine ibex is a mysterious animal on our wondrous planet. And as it turns out, the history of conservation surrounding this Mammalia ungulate is an informative example of recovery and renewal.

Today, we’re going to dive into the basics of Capra ibex, their return from near extinction, and where you can try to catch glimpses of them yourself. In this story, there is a warning regarding our own behavior. There is also hope exemplified in this species we were able to save with swift, bold action from community awareness and sure-footed leadership.

The Basics of Capra Ibex

Capra ibex is the scientific label for this beloved “mountain goat” of sorts with a whole list of other names. Some examples include steinbock, bouquetin, just ibex, and even Capra ibex ibex. If this last name seems redundant, you are absolutely right. This is a feature of botanical species with various subspecies. The double name helps us to distinguish differences while acknowledging evolutionary relationships. Species of wild goats that were considered subspecies of the Alpine ibex (at one time) include Nubian ibex,  walia, and Siberian ibexes.

Back to Capra ibex specifically:

This is a mysterious, wild goat that lives in the European alps. This species’ endemic range includes Italy, Switzerland, Austria, France, and even Slovenia. Evolutionary biologists and archeologists have found fossils of an ancestor animal in Kenya, China, and Slovenia.

The alpine ibex has a short, broad head. Its coat is a brownish-grey color with a pale underbelly. These mammals molt twice a year – growing a thicker coat through September to prepare for late autumn and winter months.

These goats are herbivores and climbers, moving around through the swiss alps at snow line where the landscape is rough, jagged, and gritty. They are classified as an Artiodactyla. This means “cloved-foot animals”. It’s a distinct category that also includes sheep, antelopes, camels, pigs, cows, and giraffes. These creatures are adapted for thriving in open grasslands most often. Though Alpine ibex are obviously an exception – frequenting the monstrous and sublime heights of the alps.

The most distinct feature, for male ibex at least, is the very long and pointed horns. They are not the sort of feature you want to get tangled up with.

Additional to the horns, the male ibex is also larger bodied than the females.

For most of the year, male ibex and females live separately from one another. This of course changes during the breeding season, when the animals are in rut – usually around December of each year. The breeding period lasts six weeks.

Adult males fight for females using their horns against one another. Sometimes, male aggression can be indirect in the form of threats and displays. Scientists note a “linear dominance hierarchy” amongst the males, which usually depends on horn size and group cohesiveness.

The courtship process is determined by these power dynamics and has intricate phases and happenings – a reminder that these animals are social beings with habits, preferences, and memories of past encounters. After a male and female copulate, the gestation period lasts around 167 days. About 20% of C. ibex births are twins. Like other species of goats, these offspring are called “kids” until they mature into adolescent adults.

When not breeding, the sexes separate again into distinct groups: adult male groups, female herds and their offspring, and groups of young individuals.

Individuals reach sexual maturity at 18 months – but will keep growing through the years. Females usually reach their full size in between five and six years of age. Alternatively, males take a bit longer, reaching full size in nine to eleven years of life.

In the wild, these creatures live up to 19 years old.

Ibex are present in the fossil record dating back to the Pleistocene. This is a period of time when the Alpine Ibex and the Spanish ibex split and evolved from the extinct Pleistocene species Capra camburgensis.

As is so often the case with human population increase and technological progress, we began to seriously impact the endemic landscape of these alpine goats as early as the 16th century. Due to poaching, overharvesting, and encroaching pressure, the population steadily declined.

Extirpated is a term that means “root out and destroy completely.” We use this word specifically to describe an animal that has completely vanished from a particular area, but not from the globe as a whole. Obviously, extirpation leads to extinction.

And this is exactly what happened in the case of alpine ibex: by the 18th century, these sharp horned goats were gone from Germany and Switzerland. By the 19th century, they had disappeared from Austria and northeastern Italy as well.

The situation devolved into something dire: at one point, the only remaining territory where alpine ibex climbed the snowline was the Gran Paradiso and Vanoise Massifs. There were less than 100 of them. This area (Located in the western Italian Alps and the Maurienne valley) then became a park in an attempt to save the species. At the time, Victor Emmanuel II, the first king of a united Italy named it as a “Royal hunting reserve of Gran Paradiso”. It became an official national park in 1922. With these actions, the number of individuals had gone from nearly extinct to over 3,000.

A Success Story With Strings Attached

In some instances, this recovering population naturally spread to adjacent areas. However, reintroduction is a major part of this success story. Today there are over 30,000 Alpine ibex. And while they are still mysterious to us, their conservation status is in a much better state. They roam the Italian alps, rutting, fighting, foraging. The IUCN lists them as a species of least concern. In a world increasingly defined by the climate crisis, this sort of success story is a rare boon.

But it’s not exactly a “one and done” sort of thing with conservation and reintroduction efforts. While the size of herds is worth celebrating, as are restored chains of reciprocity within ecosystems, these recovered populations have a very low genetic diversity. Because they recovered from such few individuals, the species is now inbred and extra vulnerable to disease. This could be a problem in the future to come.

Additionally, the conservation efforts of ibex cousin species are not so optimistic. Two species of the Iberian ibex, endemic to the Iberian peninsula, are already extinct. And even with massive cloning experiments underway, no individuals of these species have lived longer than a few minutes.

Where To See Them Today

The European alps are an incredible place to visit for a plethora of reasons. And thanks to conservation efforts, you might have a chance to spot the mysterious alpine ibex for yourself – though you’ll have to get pretty high up in the mountains to do so. Pack those hiking boots!

Gran Paradiso national park remains a popular destination to bask in the wonders of ecology while scanning the snow line for any wild goats. Fellow bovidaes of the mountain goat variety in this area of the world include chamois – another mammal to keep an eye out for.

Ultimately, the story of the alpine ibex continues to unfold. We witness them in their natural habitat and feel compelled to protect them and the delicate systems where they climb, graze, chew. As we move about our lives it behooves us to consider these other sentient beings – organisms that contribute to healthy environments – as neighbors and relatives. And while creatures like the Alpine ibex don’t currently get a vote in our societies, it is our job to vote and activate on their behalf.

Species of wild goats are an important link in the connective chain of a landscape. They are a reminder that our human species should endeavor to fix the detrimental impacts we have caused.