Imposter Syndrome: An Introduction to Batesian Mimicry and Müllerian Mimicry 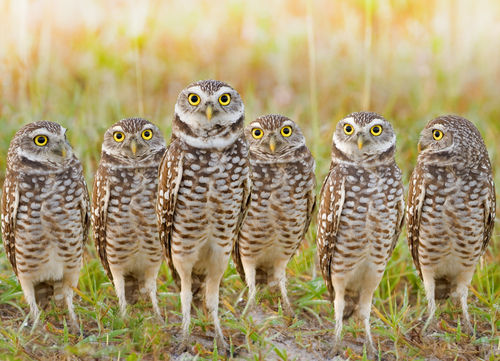 Imposter Syndrome: An Introduction to Batesian Mimicry and Müllerian Mimicry

Evolution is a treasure trove of wonder. It has led to an unimaginable diversity of adaptations for every type of habitat and ecosystem on Earth. Cool features like camouflage help protect critters from hungry predators. Batesian mimicry is a fascinating adaptation that provides a different sort of clever protection for some species.

You’ve no doubt heard of Charles Darwin. While he is often solely credited for discovering the theory of natural selection, Alfred Russell Wallace is arguably as important. In fact, many scholars believe that Darwin would have waited decades to publish On the Origin of Species had Wallace not independently arrived at the same conclusion and threatened to beat Darwin to the publisher. 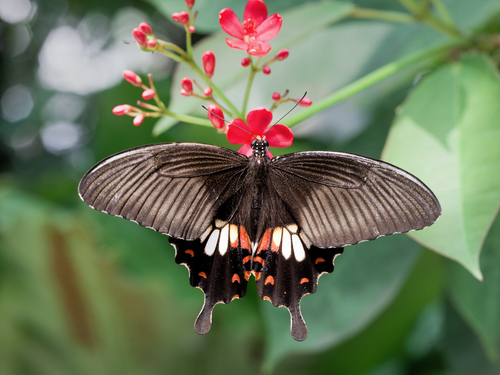 Papilio butterflies, in the order Lepidoptera, are a common

Anyways, Wallace and Henry Walter Bates both worked as naturalists in the Brazilian Amazon in the late 1840s. They must have had provoking campfire conversations that seeded the ideas of evolution, zoology, ecology, and novel biological sciences. Wallace left the Amazon after a couple of years to head to Indonesia, but Bates remained in the jungle for much longer. Bates collected tens of thousands of specimens in the deep Amazon for 11 straight years. Those old-school English naturalists sure were dedicated.

After extensively studying butterflies, Bates began to notice that some of his taxidermied butterflies appeared nearly identical. Upon closer inspection, however, he realized that these butterflies that were remarkably similar in appearance were not even in the same families. How did such different butterflies have the same colors, patterns, and shapes on their wings?

Bates proposed mimicry as the mechanism for this type of evolution. Just three years after Darwin published On the Origin of Species, Bates published his book on mimicry. Bates’ mimicry concepts complemented Darwin’s (and Wallace’s) theory of natural selection very well. Bates went on to be part of the prestigious Linnean Society and The Royal Society later in life. 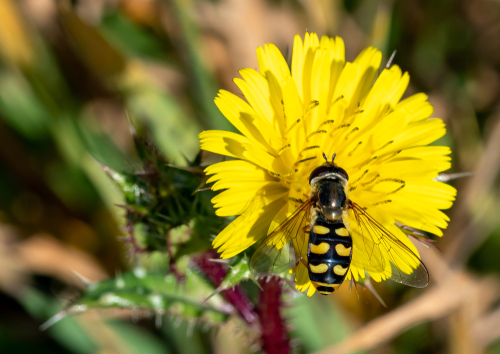 Did you think this insect was a wasp? If so, you were tricked by Batesian mimicry. This insect is actually a harmless fly that has evolved to look like a dangerous stinging wasp.

What is Batesian Mimicry?

Batesian mimicry is when a harmless species copies the honest warning signals of a dangerous species in order to avoid predation. Let’s break that down. 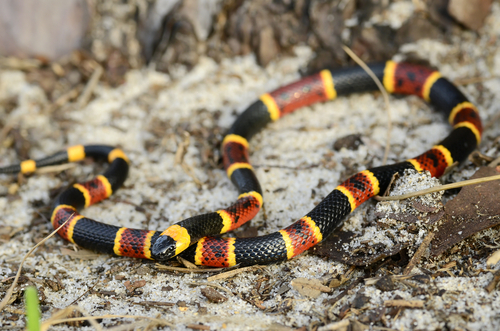 A Batesian Mimicry Example: The Coral Snake and Kingsnake

“Red on yellow, kill a fellow. Red on black, venom lack.” This playful saying distinguishes between the model species of the eastern coral snake and the mimic species of the scarlet kingsnake. These snakes live in the southeastern United States.

While they both have beautiful color patterns, the coral snake is truly deadly and the kingsnake is not. The coral snake’s colorful banding is its honest warning signal. Those bright colors tell the predator “don’t eat me! I’m nasty!”

Coral snake venom is a systemic neurotoxin that inhibits respiratory muscles and damages the nervous system. Only one human has died from coral snake bites in the recent past, but coral snake’s predators surely aren’t as lucky. You don’t want to mess around with coral snakes.

Other raptors and snake predators also avoid the coral snake due to its high toxicity and warning colors. 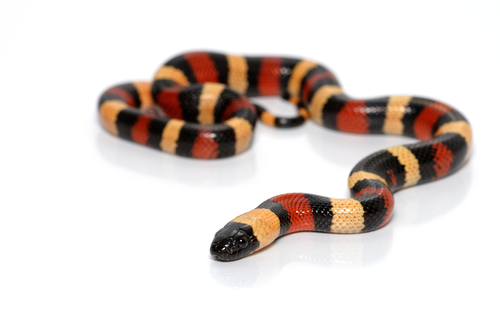 The scarlet kingsnake has red bands that touch black bands. Other than that, it looks pretty identical to the coral snake, right?

The Scarlet Kingsnake: The Mimic Species

The scarlet kingsnake, like all kingsnakes, is non-venomous. It takes advantage of the avian fear of coral snakes by using the same warning coloration. The kingsnake exhibits imperfect Batesian mimicry. That cutesy rhyme above shows that there are noticeable differences between the banding of the two snakes. However, this difference doesn’t seem to be pronounced enough for predators to mess with the kingsnake. The kingsnake gets all the protection that the coral snake has without having to produce venom.

Interestingly, there are similar Batesian mimicry systems with other coral snake species. The Sonoran coral snake in the deserts of northern Mexico has the Sonoran kingsnake as a mimic. The plains milksnake (which is also a species of kingsnake) mimics the Texas coral snake. These poor coral snakes are being copied left and right!

If an avian predator hunted a coral snake, the coral snake would bite the predator and seriously injure the bird, and possibly kill it. That risk of injury or death isn’t worth the single meal the snake would provide for the bird. The bird is better off hunting harmless mice. That’s why the mot-mots won’t hunt coral snakes. The look-alike kingsnakes show a nearly identical warning signal as the coral snakes, so the birds can’t tell the difference. Therefore, the avian predators also avoid eating the kingsnakes.

The mimics are the real winners in these systems. Since the harmless mimics appear so similar to the truly poisonous model species, the predator can’t tell the two apart. The predator determines that the mimic is poisonous, even though it is not. The predator loses out on potential food by falling for the mimic’s phony warning signals.

Poisons and toxins are complex, energy-intensive chemicals to make. The mimicking kingsnakes gain a distinct advantage by getting protection from the threat of using a venomous bite without actually having to produce the costly venom. Mimics can deter predators without the energy cost of making such resource-intensive chemicals. 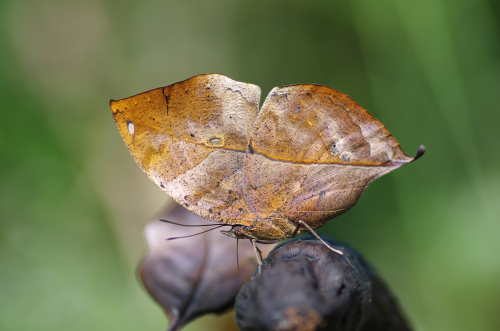 Camouflage is not an example of Batesian mimicry. Animals that camouflage are trying to hide from predators, whereas Batesian mimics are easy to detect by the predator.

Some Nuances of Batesian Mimicry

Batesian mimicry only works well if the model species greatly outnumbers the mimic species. This is because the predator needs to have a high chance of actually being hurt or poisoned if it hunts either species. If only 10% of the model and mimic animals were toxic models, then 90% of them would be palatable mimics. Predators would be more likely to eat both the mimics and models because they would be less likely to experience the negative effects of eating a toxic model. In this situation, Batesian mimicry would fail.

The same researchers also found that the degree of distastefulness of the model species impacts the success of the mimic species. If the model is more toxic to the predator, the mimic is less likely to be predated.

The Power and Pressure of Natural Selection

Whenever there is a huge competitive advantage in natural selection, there is great pressure on a species to evolve towards that advantage. The evolution of Batesian mimicry provided a huge advantage to the mimic. If an ancient kingsnake was just black and white, it wouldn’t be a Batesian mimic. But imagine a random mutation turned a few bands of scales on that kingsnake into a scarlet color rather than black. That kingsnake’s scarlet phenotype might cause predators a bit of hesitation. The bird might wonder if the mutant kingsnake is edible or not. This decreased chance of predation means the kingsnake with a few red scales has a selective advantage. That mutant kingsnake is more likely to produce offspring. These offspring would then inherit the red scales.

As natural selection works through thousands or even millions of generations, that selective pressure continues to push the kingsnake to appear increasingly similar to the model species. This convergence eventually results in a Batesian mimicry system.

A Quick Note on Müllerian Mimicry

Müllerian mimicry is a slightly different form of mimicry from Batesian mimicry. Instead of being harmless, the mimic species is actually poisonous. Therefore, the two species are co-mimics. Both species gain an advantage because predators need to consume fewer individuals from the co-mimic species to learn they are poisonous compared to if they did not mime each other.

For example, let’s imagine a bat needs to eat 4 poisonous moths before learning that type of moth is poisonous. If there are 100 moths and the bat eats 4 then the population is reduced to 96. Imagine a Müllerian mimicry example, though. If there are 100 moths from each species and the bat only needs to eat 4 moths total to learn that both species are harmful, then the final population of moths is 196. This population decrease is only 2% instead of 4% in the non-mimic situation. 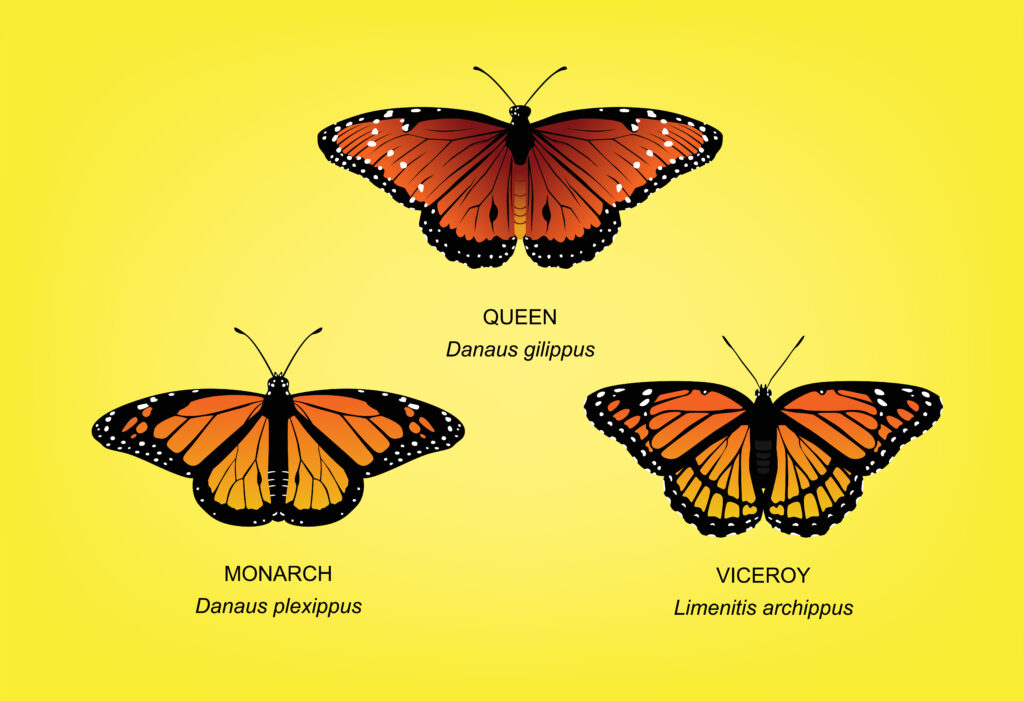 An illustration compares the monarch butterfly to the viceroy. The black band on the bottom of the viceroy is the easiest way to tell the different species apart.

Batesian Mimicry or Müllerian Mimicry? The Monarch Butterfly and Viceroy

Monarch butterflies (Danaus plexippus) are noxious to predators because they eat tons of milkweed as caterpillars. Milkweed contains compounds that are toxic to many creatures, but not monarchs. As the caterpillars munch away at milkweed, they concentrate these toxins in their bodies. These toxins make them unpalatable to predators. The monarch’s striking black and orange coloration serves as the honest warning signal to potential predators. 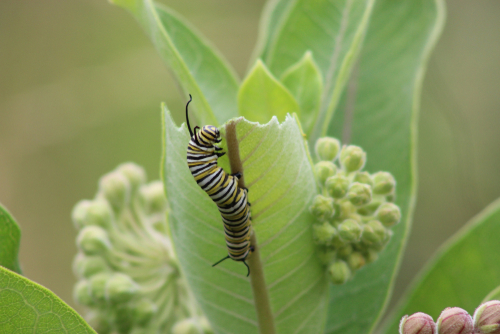 A monarch caterpillar eats its host plant, milkweed. This plant contains the toxins that make the monarch poisonous to predators.

The queen butterfly (Danaus gilippus, same genus as the monarch) is less toxic than the monarch but serves as another model species in this system.

The viceroy butterfly (Limenitis archippus) was, for a long time, thought to be the mimic species in a Batesian mimicry system with the monarch and queen butterflies. In the 90s, however, researchers discovered that the viceroy exhibited the same degree of unpalatability as the monarch! More surprisingly, it was actually more toxic than the queen butterfly. These findings prompted the monarch-viceroy mimicry to be reclassified as Müllerian mimicry. Remember, science is never fixed! It is in constant flux. 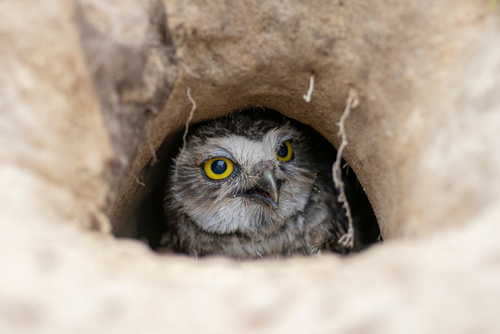 A burrowing owl pokes its head out of its burrow.

We still have much to learn when it comes to mimicry. Most of the famous mimicry examples come from aposematic coloration. This means that the model and mimic species appear the same to our eyes. But we humans are visual beings and our perspectives are biased towards the visual realm. Certainly, there must be tons of examples of mimicked odors, sounds, tastes, and textures. Currently, we have proof of only a few non-visual Batesian mimicry systems. 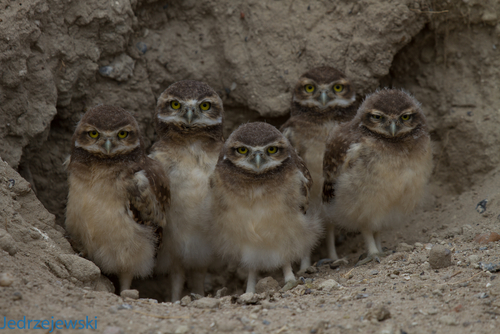 Who are you looking at?

Burrowing owls are much less terrifying than rattlesnakes. They are fluffy, have goofy long legs, and are itty bitty. They build their nests in old burrows in the ground. Birds eggs are perfect treats for any predator, especially when they are conveniently located just below the ground. Without a venomous bite or huge teeth, how can the burrowing owl defend its nest?

Burrowing owls have learned to mimic the rattlesnake’s rattle as a call. This vocal imitation isn’t perfect, but it’s pretty darn good. With the consequences of being bitten by a rattlesnake so high, would you risk blindly sticking your badger paw into the hole in the ground? Well, maybe would take the chance if you were a roadrunner. 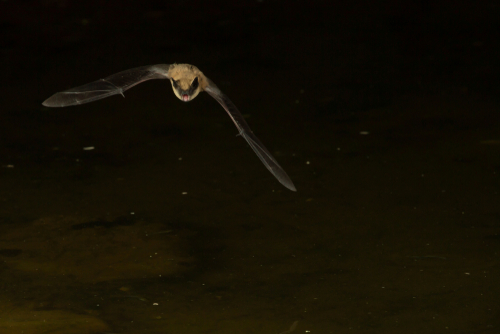 A big brown bat hunts during the night with echolocation.

Keep Your Eyes Out For Mimics

Whether it is snakes in the nearby hills or hoverflies in your garden, you can probably find some Batesian mimics near you. But be careful! As we’ve learned, the mimics and models can look so strikingly similar that messing with either of them could be dangerous. Don’t find yourself fooled by the Batesian mimics by picking up a coral snake in the woods!