Mouthbrooding: Everything You Didn’t Want to Know • Earth.com 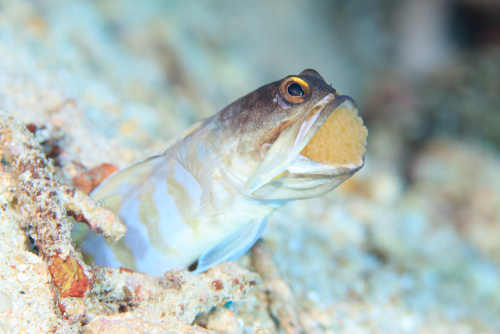 Mouthbrooding: Everything You Didn’t Want to Know

Mouthbrooding refers to the parenting strategy in which the adult keeps their eggs or young offspring in their mouth! Also called oral or buccal incubation, this approach to parenting may have you raising an eyebrow. But let’s let go of our attachments to mammalian wombs and childsafe cribs (at least for the length of this article) and consider that the mouth could offer a safe cozy spot for some species.

Mouthbrooding is a fascinating life history strategy, but it makes a lot of sense. Many fish and amphibians lay hundreds of eggs in very vulnerable places. Mouthbrooders reduce that risk dramatically. By housing their eggs and fry (juveniles) in their mouths, very few are predated. Among these different species, there are a couple of different types of mouthbrooding behaviors: maternal and paternal mouthbrooding. We’ll dive into both of these more with our review of sexual selection.

Interestingly, these differences have brought to light some fascinating trends about sexual selection. Sexual selection is the theory that certain traits give an individual a greater advantage in winning a mate. For example in the avian world, the more beautifully colored males with the most charming songs win the attention of the females. For mouthbrooding animals, the mate that extends parental care (i.e. provides the mouth for brooding), is the subject of intense competition by the other mate.

For example, in cichlid fish, the females are usually the mouthbrooders. Therefore, the males intensely compete with one another for mates. For the African cichlid, the male will first dig out a nest in the substrate, then perform a dance to attract the female into the den.  It’s the reverse for cardinalfish, in which the males are the mouthbrooders. In that case, the females compete with one another for their mates. The reason for this competition has to do with time and energy. In both paternal and maternal mouthbrooding fish, the parent that doesn’t mouthbrood has a higher reproductive rate than a clutch of eggs can hatch.

While there are a few mouthbrooding frogs, the behavior is actually more typical in fish. In fact, this strange form of parental care is found in nine different families of fish. Examples of this uncommon parenting strategy have shown up independently throughout the animal kingdom. Here are a bit more details on these fascinating animals that evolved to incubate their young in the parent’s mouths.

Just three species of pointy-nosed frogs make up the family Rhinotermitidae. Also known as Darwin’s frogs, these amphibians hop around the forests of Chile and Argentina. All three species display paternal mouthbrooding. After the female lays her eggs, the male cares for them in his mouth. The wiggling larvae force the male to swallow the eggs. They then complete their metamorphosis in his vocal sac, only to emerge from his mouth as fully developed frogs.

There are nine families that each include at least one mouthbrooding species of fish. For some families, all the species evolved to be mouthbrooders, while in others, just a single species developed the trait. Coincidentally, many of these species are popular freshwater aquarium fish.

When your mouth is full of eggs, other, more typical mouth functions become more difficult. With limited space in the buccal cavity, mouthbrooding fish typically don’t eat while they have eggs in their mouths. Depending on the species, it can be one to two weeks before the eggs hatch. That’s quite a long time to fast! So these parents face quite the evolutionary trade-off: sacrifice significant amounts of energy to give the young a safe place to hatch.

While the primary goal of mouthbrooding is to protect the young, there’s a chance that a few might be swallowed. In the case of unfertilized eggs, the mouthbrooding female might intentionally swallow them. But some species of cardinalfish have been documented to even eat some of the fertilized offspring. It’s unclear whether this act of cannibalism is completely accidental or they’re just desperate for a snack.

Another very brutal risk to mouthbrooders is brood parasites. A common phenomenon in birds, a mother will lay her eggs in another bird’s nest to avoid taxing parental care. This happens to mouthbrooding fish as well! For example, the mochokid catfish will trick a neighboring, mouthbrooding cichlid into including its eggs in its brood. Unfortunately for the cichlids, the catfish eggs hatch first, and the young fry feed on the yolk of the remaining eggs.

The animal kingdom is full of stories of animals going to impressive lengths to protect their young. While a bit strange, mouthbrooding is not different.