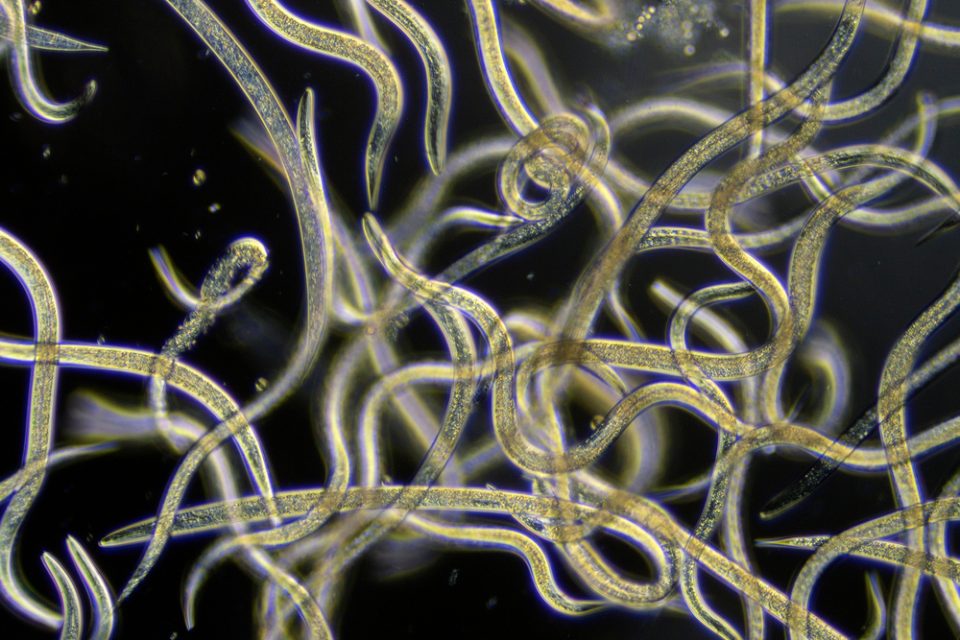 Nematodes – not exactly a word many of us hear often unless we work in a lab or in the garden. But as it turns out, unless you are perusing the internet from the international space station, you’re surrounded by them even as you read these words.

Perhaps you heard a rumor at the flower shop. Maybe you’re in the midst of a biology class in school. It’s possible you’ve seen small cysts in the roots of your soybean bed. Whatever it is that inspired your internet query today, you’ve come to the right place to learn about nematodes. We’ll discuss what they are, how they move and interact in the world, and the ways in which nematodes are part of your life – whether you like it or not. Let’s dig in.

Get To Know Nematodes

Nematodes, also known as roundworms, or eelworms make up the phylum Nematoda. This phylum is a world-wide phenomenon, found almost everywhere in the world and ranging from mountaintops to freshwater streams and deep valleys, the tropics all the way up to the arctic, across the deserts, and slurping around in bogs – anywhere where there is a sufficient amount of water to support their various life cycles and preferred habitats. There are an estimated 12,000 species on our planet and they are categorized with insects and other molting creatures in the clade Ecdysozoa. They are “elongate, thread-like, and active animals” that are also commonly found in the stomachs and intestines of birds, fish, and mammals. Most are cylindrical, though some species have females are that are spherical. Nematodes are one of the most abundant invertebrates on Earth.

But for how abundant they are, they can sure are hard to spot. While it is possible to see certain species of nematodes, most are slender and transparent. This makes them incredibly difficult to see with the naked eye.

Derived from the Greek word for thread, these tube-like organisms move like eels where they live. Most species of nematodes are free-living and feed off of fungi, bacterial, and algae microorganisms. They are highly successful parasites. This is because of their physiological elasticity: one species is only found in vinegar. Another specializes in the niche-habitat of beer mats at the local dive bar.

Often, the life cycle of a nematode is determined by six distinct stages: egg, four juvenile stages, and adult. The smallest free-living adult nematode is about 250 mm, but parasitic nematodes can be as smaller than 2 mm. In most species, females and males occur, though reproduction often happens without males and these animals are frequently hermaphroditic. Once an individual produces eggs, their life cycle is complete. Species can produce anywhere from 50 – 500 eggs per female – though some can produce up to 1,000.

More specifically, in the example of the soybean cyst nematode, eggs develop within a cyst. According to Iowa State University, inside each egg is an unhatched juvenile. A nematode’s body wall is composed of an underlying cell layer called a cuticle, and once the juvenile eggs hatch, they can penetrate the cell walls of the soybean root (similar to other soil nematodes). Once in the root, the juvenile develops into an adult male or adult female. The females eventually break back through the root’s surface but remain connected while the adult males leave the root system. The male and female will mate and the female will lay eggs, eventually dying and hardening around the egg sack as a tough cyst.

Understanding the life cycles of different invertebrates is interesting. They might help you pass a biology exam, but it’s so much more than that too. Take Caenorhabditis elegans – it is one particularly famous species in the study of nematology in the last 25 years. Nematologists around the world are working to sequence the entire genome of this species. Oddly, it has no obvious economic benefit or parasitic threat to us. Why is that?

It shares many of the same biological characteristics that are central problems in our own biology. The worm begins as a single cell, undergoes complex development, maintains a nervous system, and exhibits behavior capable of learning. While it has yet to demonstrate consciousness, the parallels of this species with our own life cycle are eerily similar and “provides researchers with an ideal compromise between complexity and tractability”. In studying and understanding animals as small as nematodes, we can better understand ourselves.

People shudder at the thought of small critters living inside the body. Nematodes abound as parasites in mammals, and that includes Homo sapiens as well. These nematode parasites are documented In texts dated as early as 1550 BC for their plaguing presence in the human body. Another name for these pests is “lesion nematodes.”

Some historians have inferred that the “fiery serpent” of the Bible that bedeviled the children of Israel after they crossed the swampy terrain of the Red Sea may have been the Guinea Worm Dracunculus medinensis, which can grow over 12 inches in length in your intestines – a terrifying legend from antiquity that is very much real in that part of the world today. You’ve probably heard of hookworm before as it is a nematode parasite that commonly causes diarrhea, malnutrition, and other infective, escalating medical conditions in marginalized communities, especially in areas that don’t have access to a clean water supply.

The largest parasitic nematode we know of is Placentonema gigantissima. It is a marine species documented to be over 8 meters long and living in the placenta of a sperm whale – a terrifying image to behold.

Parasitic nematodes (such as Ditylenchus spp.) aren’t only after animals, however. Some species wreak havoc on your garden as well and are major agricultural pathogens or plant parasites. These destructive creatures are much, much smaller – often invisible to our eyes. Generally, if you can see a worm-like crawler in your garden or compost, it isn’t actually a nematode. But plant parasitic nematodes (PPN) are ubiquitous in agricultural soils and can cause significant crop damage.

Most species of plant-parasitic nematodes attack by using their needle-like stylets to pierce and kill root cells. Species that use this type of feeding method include lesion (Pratylenchus) nematodes, lance, stunt, and sting nematodes. The species that inspire the fiercest loathing in farmers and the harshest economic impacts include the root-knot nematode (Meloidogyne incognita) and the soybean cyst nematode because their feeding style allows them to establish permanent feeding sites and complete their life cycle without killing nearby cells.

A nematode infection, by Heterodera species and others, in plants will look a lot like inhibited root growth and root function and may resemble environmental stressors such as drought and nutrient-deficient soil. Yields will decline and plant appearance can be yellowing, wilting, and stunted.

Oftentimes, though the nematodes are invisible to our eyes, we can inspect root systems of evidence of cysts and pale female bulbs that are big enough for us to observe right out of the ground (or pot).

By the time you notice the effects of these parasites upon your plants, it’s probably too late to take action. Nature is as beautiful as it is cruel. Crop rotation techniques can be an effective means of nematode control (without using nematicides) and a way to mitigate similar sorts of crises that result in crop losses.

The Benefits of Nematodes

But, not all nematodes are scary snake-like parasites slithering in your intestines or invisibly depleting your garden or fields. As one of the most variable groups of animals, there are incredibly helpful species as well. Beneficial nematodes are used intentionally by organic gardeners and farmers to great effect.

So, what’s so good about nematodes and why do organic growers use these small creatures? First of all, it’s important to understand that these tiny creatures play a critical role in the decomposition and recycling of nutrients in various ecosystems. For example, nematode populations are richly abundant in arable soil. There can be over 3 billion nematodes in one acre of land, calculated to a depth of 20 centimeters, and they are usually most abundant in the upper layers of soil where organic matter, plant roots, and other resources are most abundant.

And those same parasitic tendencies that make certain species of nematodes dangerous to us or to plants? There are other nematodes that go after the insect pests that we want to control organically with the same vigorous energy. Beneficial feeding nematodes will devour up to 200 different species of insects, regulating adult bugs and also larvae, juvenile insects in grub stages that can ruin your neat rows of veggies and annual flowers.

Collaborating with beneficial nematodes might save your lawn. And more importantly, when you finally tear up your lawn of Kentucky bluegrass (the largest mono-crop in North America and a huge detriment to our ecological health) and replace it with native perennials and water-saving landscaping techniques, beneficial nematodes will be a sustainable link in the bio-niche of your home.

How To Use Nematodes in Your Garden

To use beneficial nematodes in your garden is really a pretty simple process. Start by contacting a nearby organic gardening shop. Beneficial nematodes are popular and chances are, a good garden store will have them in stock during the growing season. Additionally, they are likely to have a whole plethora of other beneficial predators such as ladybugs and praying mantis sacks. If you aren’t able to find them in a store, you can order beneficial nematodes online as well. Most products will have specific directions on the bottle. Usually, you simply add the contents of the package or bottle into a spray bottle or a watering can mixed with water.

Different species of nematodes will prey upon harmful pests with an efficiency that is reminiscent of a good horror film. Some ambush their prey. Others lure them in. Heterorhabdtis uses a cruising strategy.

Nematodes might feel out of the box to gardeners from older generations with a proclivity for Round-Up. But, these techniques will be part of how we save the birds, the bees, the butterflies – and ourselves – from catastrophe. Digging into regenerative, organic methods of gardening can be an empowering way to connect to where you live, take accountability for your impact on the planet, and combat the climate malaise that seeps into our culture. Try beneficial nematodes in your garden and then tell your friends!

Like most of life on earth, nematodes are fascinating and nuanced. We’re so quick to categorize our fellow ecosystem inhabitants as “good” or “bad”. We conceptualize the natural world into polarized extremes, elements of an ecosystem to be protected or eradicated.

Hopefully, it is obvious that this is simply not the case. In understanding the different phyla and the wild world of creatures that interact in cahoots and also in adversity, we know that the web of life is an intricate dance that we must respect and study. In a deeper understanding of animals like nematodes, we gain insight into our own existence and utilize the benefits of these small thread-like creatures in innovative ways to enrich beauty and deepen our connection to the landscape and sustainable ecology.