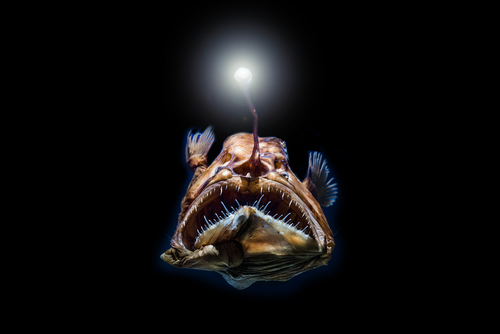 70% of the world’s surface is the ocean – and much to the horror of humans through the millennia, scary sea monsters are actually a real thing. They prowl the vast waters of our globe and emerge with terrifying results in stories – and real life.

From the Atlantic to the Pacific oceans, from the North to the coast of New Zealand, there are fascinating sea creatures that strike fear into the hearts of the bravest explorers and threaten the most unsuspecting coastal tourist. At the same time, these scariest sea animals are wonderful, enchanting, living examples of evolution, adaptive behaviors, and thrilling possibilities within nature.

Perhaps that’s why they play such a massive role in our collective imaginations as well: the Kraken of Nordic sea lore, the loch ness monster of Scotland, the Lukwata sea monster of Uganda. The list of fables, legends, and sea shanties is as deep as the deep-sea waters where some monstrous animals swim. Science is just beginning to catch up and we can look to organizations like NOAA (National Oceanic and Atmospheric Administration) and MBARI (Monterey Bay Aquarium Research Institute) and others for emerging information on the truth behind the scary stories.

So let’s dive in: today we’ll look at the ecosystem of the ocean – the playground and habitat of an estimated one million animal species – and rip through some flash-points of the scariest swimming creatures among the masses. We’ll also look at the ways in which the changing, warming oceans make even the most fearsome creatures vulnerable to disturbance and possible extinction. Scary stories abound!

An Ecosystem Of Monstrous Proportions

When you think about it, the ocean itself is a bit of a monster – a living, breathing system of giant proportions.

For example, most life on earth is aquatic. Less than 5% of the oceans have been explored. The longest Mountain range is underwater. 70% of the world’s oxygen – a fiendish amount – is produced by the ocean. The pressure on the seafloor will crush you. 90% of the Earth’s volcanic activity happens in the ocean and the great barrier reef of Australia is so massive it can be seen from the moon.

The stats continue on in epic, sublime ways: the largest blue whale on record is as long as an 11-story building. The rounded sound ever recorded was of an iceberg falling into the ocean – and could be heard 3,000 miles away. The ocean exists as a living fossil of itself, providing important clues and records of sea animals what has occurred on planet earth. It contains limitless secrets for us to slowly piece together, like a salty sea foam puzzle.

There are plenty of secrets of the monstrous seven seas that we have yet to understand. But there are plenty of real-life sightings to send a shiver-of-a-jellyfish sting up your spine.  The depths of the ocean are where mysticism meets horror movies – and the surface is by no means safe, either.  Read on for a thoroughly-inconclusive list.

Box Jelly is especially scary because to encounter a box tentacle is usually a death sentence for a human being. Named for their shape, they are considered the most venomous animal in the ocean according to NOAA.

Their tentacles are loaded with poison darts known as nematocysts. People and animals that encounter these booby-trap-laden strings can become paralyzed, have heart failure, and die within minutes. There are 50 or so species of box jellyfish, and only a couple have the venom count to kill people. Those species are found in the Ind-Pacific region and Australia. Terrifyingly, they do not live in deep water but are a coastal species.

The frilled shark is what many scientists consider a “living fossil” with its strange lizard-like head, ruffled throat, long body, and tiny fins. It definitely looks a lot like how a “sea serpent” of folklore is described. While it doesn’t exactly add validity to stories like the Loch Ness monster or the Midgard serpent, it does have an “enchanting beast” quality to its appearance.

Frilled sharks rarely swim up to surface waters. Instead, they are a species of shark that moves through various life cycles in the area of the ocean known as the “twilight zone”. Want to take a look at another “living fossil” of the deep sea with an unnerving smile? Check out the Goblin Shark.

No – these sea monsters just look scary. They are active predators but pose no threat to humans.

Fangtooths have a look that will haunt your dreams – and will continue to inspire the art-imitates-life-forms of various installations and horror films. It has razor-sharp teeth of terrifying lengths – perfect for catching prey such as fish and crustaceans.

They are deep-sea swimmers along with Anglerfish. Their habitat ranges in tropical and temperate seas at 1,640 to 6,561 feet deep.

No – these fangtooths live so deep, they pose no threat to us – just the other animals that they feast and hunt for.

Another fish with an appearance that can absolutely give you nightmares is the viperfish. It’s a broad title for any species of marine fish in the genus Chauliodus. These species are characterized by needle-like teeth and hinged jaws that will remind you of an underbite.

These are also deep-sea swimmers. Similar to other species living in the dark depths of the ocean, they lure in their prey with light-producing organs called photophores.

Nope – again, these fish swim so deep that they pose no risk to us.

Indeed, the giant squid is much more than a fictionalized creature in the lake on the Hogwarts School Of Witchcraft And Wizardry grounds. The giant squid is a real-life animal and the second-largest mollusc we know of in Earth’s history. It is an excellent example of deep-sea gigantism, a phenomenon and zoology term that describes species of animals that are significantly larger than their shallow-water cousins.

Why is this? McLain et al. propose that “limited resources [in deep water] select for larger body sizes that can better withstand periods of famine or ability to cover larger distances in search of scarce prey.”

In 2019, a giant squid sighting was documented on video near the Gulf of Mexico, reigniting the public’s fear and fascination. In this instance, the squid was only a juvenile but was still an estimated 10 feet long.

Squid and octopus (giant, or otherwise) are formidable fighters. While they do not typically attack humans, they are well equipped to defend themselves if they feel threatened.

A name worthy of a horror movie in and of itself, the vampire squid is indeed a real-life thing – – a sea creature that is actually quite small with an intriguing appearance. It’s scientific name  is Vampyroteuthis infernalis. It lives in tropical and temperate waters in areas identified by “extreme deep-sea conditions”. It is the only known survivor of the order Vampyromorphida and is a species that produces bioluminescence.

The arms of this squid will regenerate if bitten or ripped off. Often, the discarded limbs then act as a diversion for the vampire squid to escape. It’s a defense mechanism that is equal parts scary and amazing.

According to NOAA, vampire squids are not even slightly dangerous to humans – they simply live too deep for us to encounter them.

One of Finding Nemo’s charming villains with a soft side, the Great white shark is no stranger to our psyches. Horror stories, films, and encounters abound.

These monsters are a species of large mackerel shark found in the coastal waters of all major oceans. It’s only predator in the wild is, occasionally, the killer whale.

While scientists explain that humans are not the “preferred prey” of the great white shark – it’s just that these creatures are curious, and are willing to take a taste test. Not a comforting thought for surfers and swimmers, to say the least.

Similar to the drama around bears, lions, and tigers on land, the idea of a shark attack ends up being much bigger, culturally, than the actual risk. For example, there were 8 reported shark attacks in 2021. For some context, over 40% of the world’s human population lives in coastal areas. These attacks are exceedingly rare.

Even if these attacks are more rare than we might realize, there’s no doubt about it. Great white sharks are dangerous animals.

Of course, the scariest story of all the scariest sea monster stories are the monstrous implications of human impact on our oceans, coastlines, and fragile marine ecosystems.

In addition to warming water and unknown impacts on deep sea migration and global currents impacting weather, there are the immediate crises that our societies must address.

Contaminated water from oil rigs, untreated sewage, boats, pets, broken septic systems, and fertilizers accumulate in the ocean. People become outraged when their favorite swimming beach is closed due to dangerous contamination – and yet, the companies and public industry responsibility is rarely held accountable or reformed in a sustainable way.

The same goes for the terrifying amounts of plastic in our oceans, in the bodies of the animals that live there, and of course, in our own systems.

And of course, there is a lot of conversation about the fishing industry – much overdue – and the ways in which extractive and exploitative fishing methods ravage the populations of tasty fish, and demolish additional species habitats and behaviors in the process.

Scary sea creatures are impacted by all of this of course – along with the more beloved marine-dependent creatures that whole throngs of people identify with – like sea turtles, dolphins, lobsters and other crustaceans, Giant Isopods, crocodiles, and oh so many species of birds. There is an endlessly nuanced web of life that depends on healthy oceans. All of it, ourselves included, depends on our ability to shift our own species’ behavior. Either we do so or we are the true monsters.