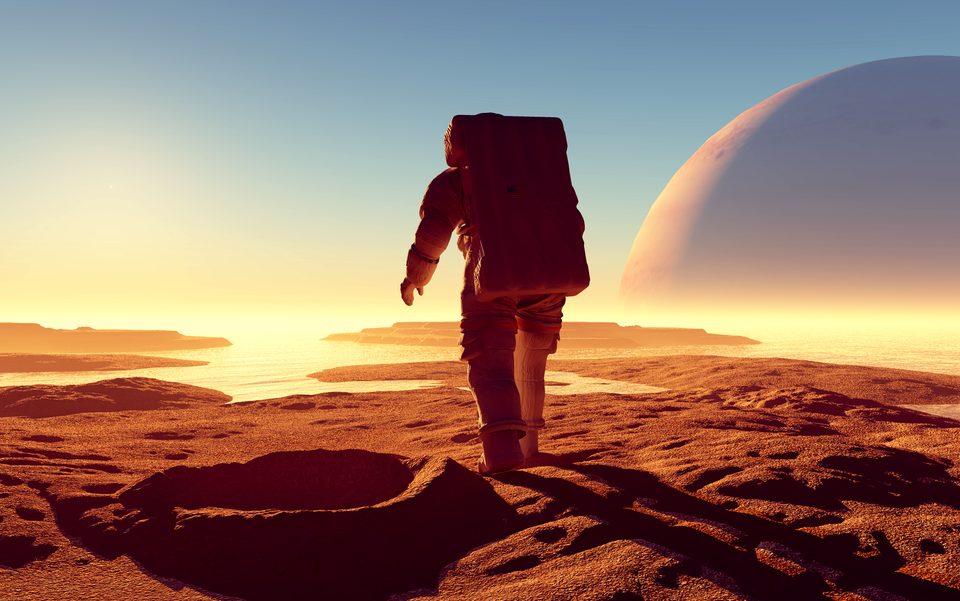 Space exploration is a constant source of philosophical, moral, and intellectual debate. Should we spend the resources exploring other planets when we can’t even take care of our own? How can we spend billions of dollars on space exploration when people don’t have access to clean drinking water? On the flip side, how can we afford not to find out what space has to offer? Perhaps we can mine asteroids for metals we lack here on Earth.

Whatever you think, the technology needed for space exploration gets better every year. The U.S. plans to make a permanent base on the moon, private companies are gearing up for space tourism, and new breakthroughs in science make it more possible for humans to reach Mars.

While the future of humans in space is uncertain, governments and companies are investing billions of dollars to further our understanding of what lies beyond our blue planet.

Humans on the Moon

Our bright, white moon is only a three-day trip from Earth, yet we still know little about it. In the last five decades, countries have focused more on deep space exploration rather than exploring our neighboring celestial body. But recently, the U.S. decided to change course and put people back on the moon.

Believe it or not, the Apollo missions from 1969 to 1972 were the only missions to send people to the moon. In total, only 12 humans have ever set foot on the moon. While several people are always onboard the International Space Station, the station is actually only 1/1000th of the distance to the moon.

In 2017, NASA unveiled Project Artemis, the first mission in 50 years to send humans to the moon. After the first two trial runs, Artemis III plans to have a human lunar landing in 2024.

While Project Artemis currently hums along, similar ambitious space programs have ultimately failed due to changes in governmental leadership shifting their funding priorities.

The twelve people who have set foot on the moon were all men. Project Artemis will change that, sending the first woman ever to the moon’s surface. This much-needed representation could inspire more women to pursue aeronautics and space exploration.

The xEMU, the next-generation spacesuit developed for Project Artemis, will level-up humanity’s ability to explore space on foot. The ultimate goal of the xEMU is to create a spacesuit usable for deep space exploration by humans.

Compared with Apollo-era spacesuits, the xEMU allows for greater movement. The supercharged static space dust proved to be an unexpected challenge for the Apollo missions. The new spacesuit doesn’t have zippers and all the important components are completely sealed off from the space environment. These improvements will prevent space dust from interfering with the spacesuits. Another cool feature is that the suits can be made for any sized human and can operate from 250F to -250F.

The main goal of project Artemis is to prepare humans for the exploration of Mars.

If all goes according to plan, the Artemis missions will create a permanent human base on the moon. This base will allow humans to explore and study the moon in more depth and with greater ease. Scientists want to use the known water reserves on the moon for deep space exploration. A base on the moon would help humans access this precious water.

The Gateway, a structure orbiting the moon, will be a waypoint for crews seeking deep space exploration. This structure will provide spaceships a place to load up cargo and provisions needed for deep space flight.

The lunar infrastructure will also create a hub for the proto space tourism industry.

Wouldn’t it be cool to go to space, especially without the years of training that astronauts need? For just a few hundred thousand dollars, you might be able to take your own space adventure very soon! While government-funding projects remain the most important in space exploration, private industry isn’t entirely new to the field. In fact, private industries already have a large presence in space, with nearly half of the 2,000 satellites in space used for commercial purposes.

In the last decade, billionaires have accelerated efforts to bring the private industry into space. Elon Musk’s SpaceX, Jeff Bezos’ BlueOrigin, and Richard Branson’s Virgin Galatic are three big players in the private space industry. Virgin Galactic has sold hundreds of tickets for $200,000+ in anticipation of its space tourism flights. It seems likely that one or all three of these companies will operate commercial space flights in the next few years.

On a different note, SpaceX made its first delivery to the International Space Station. This marks the first time a private industry delivered space cargo.

Spaceship launches require enormous amounts of fuel. When that fuel burns in the stratosphere, it isn’t subject to many forces, such as weather. The gasses and soot from that burnt fuel remain in place, more or less. Unfortunately, these byproducts can be potent greenhouse gases or other climate-altering substances. If space tourism develops as its investors hope, it’s possible that emissions from space tourism could equal emissions from all airplanes.

That’s a big problem for our climate, which is already changing at a dangerous pace. But on the bright side, uber-rich people will get to see the Earth from space!

It’s difficult to say how space tourism will pan out. Perhaps it will experience technological or financing difficulties, as it has in the past. Or maybe once the first celebrities fly in space, companies will experience huge demand for their services. It is a remarkably risky business, with huge costs and plenty of safety issues. Would the industry ever recover if a famous celebrity was killed by a spaceship malfunction in space?

However, the private space industry will likely remain relevant as a partner with governments to deliver space cargo and develop new technologies. If companies can profit off of space through these delivery services or extractive practices, such as space mining, they will increase the number of resources dedicated to space exploration.

The private companies argue that space tourism and industry will increase the pace and scale of space exploration technologies. They claim that such developments are the best way to ensure humanity’s exploration of deep space.

Space Exploration to Mars and Beyond

Mars has an outsized presence in the human imagination. It is a frequent locale for science-fiction novels, a home for hundreds of fictitious aliens, and the planet that has always seemed just out of reach. Based on the cultural narrative, it seems like a given that humans will someday set foot on Mars. But will we really ever get there?

Getting humans to Mars is a lot more difficult than getting humans to the moon. The trip to Mars takes at least 6 months, whereas a trip to the moon is under a week. This extra time means more food, water, and supplies for the astronauts. All of these additions are heavy and bulky. The extra cargo needed for a Mars mission makes it exponentially more difficult to engineer and propel than a lunar mission.

Another challenge with the bulky ship is landing it on Mars. At top speed, a spaceship carrying humans to Mars will travel at 25,000mph. Slowing down this fast and heavy ship is difficult in a thin atmosphere like Mars’. While the thicker atmosphere of Earth provided sufficient friction to slow down the crews landing from the Apollo missions, Mars’ atmosphere doesn’t. NASA is currently developing a massive sail that the Mars-bound ship can deploy to increase drag as it enters Mars’ atmosphere.

Before it can land, this ship must travel the 140-million miles between Earth and Mars. The fuels used to get to the moon aren’t sufficient for this extremely long trip. NASA is currently working on nuclear propulsion as a source of fuel. They are currently having some success with the novel ion propulsion.

Mars is the most Earth-like planet in our solar system. If humans had a chance to research Mars on the ground, they might make ground-breaking discoveries into the history of life on Earth and potentially life on Mars. Needless to say, if humans found life on Mars, that would have profound implications for cultures, religions, and governments around the world.

Some people are fascinated with the idea of terraforming Mars. These people want to turn Mars into a second Earth, habitable by everyday humans. If that’s our goal, we need to get to Mars first.

Finally, getting humans to Mars is the next stepping stone in humanity’s quest for deep space exploration. To get deeper into space, we must first make it to Mars.

Some experts think the mission to Mars is impossible without a national effort akin to the Apollo Missions. But NASA only receives 10% of the budget it did during the Space Race. With its current funding, it is unlikely NASA will send someone to Mars before the late 2030s, perhaps later. That being said, NASA is under a presidential order to put a human on Mars by 2033.

SpaceX, on the other hand, claims it will send humans to Mars by 2024. I’m skeptical, but only time will tell.

What About Deep Space Exploration

It’s safe to say that deep space exploration is a long way off. Even if SpaceX makes it to Mars by 2024, the challenges getting humans to Jupiter, the next closest planet after Mars, will be greater than the challenges overcome to make it to Mars. If humans are to explore past our solar system, we need technologies far beyond our current capabilities. Don’t hold your breath for deep space exploration any time before 2050, or perhaps even this century.