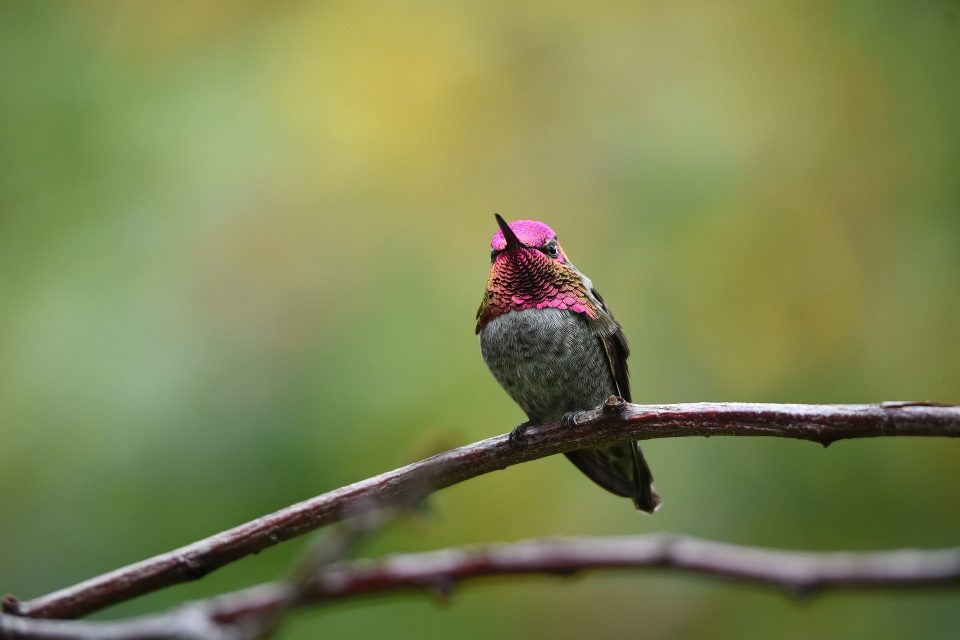 Today we’re talking about the beloved hummingbird. There are few creatures that bring such unabashed delight and a feeling of whimsy to unsuspecting onlookers. And while these tiny birds can’t help but make you smile, many people do not realize what a big journey some hummingbirds embark upon twice each year. From Mexico, all the way to Canada and beyond, hummingbirds migrate incredible distances.

Let’s begin with the basics: Hummingbird species are native to South America, Central America, and North America. They are endemic to the western hemisphere. Depending on the species, their range stretches from the tip of Tierra del Fuego all the way to Alaska. The botanical name for this family of hummers is Trochilidae – of which there are around 360 species. Most hummingbirds are less than 5 inches in length. Their body weight varies and can be anywhere from 2.0g to 24g.

Various species have been studied extensively in regard to their flight patterns. The wings of an average-sized hummingbird species can beat up to 80 times per minute. The speed at which these wings move creates a powerful humming sound if you slow down long enough to really listen.

Hummingbirds pollinate over 7,000 species of plants in their broad regions. Scientists are studying the ways in which hummingbirds and particular plants have evolved and adapted together over the course of millions of years. It is a striking example of how we are just beginning to understand the intricate links of biologically diverse ecosystems. 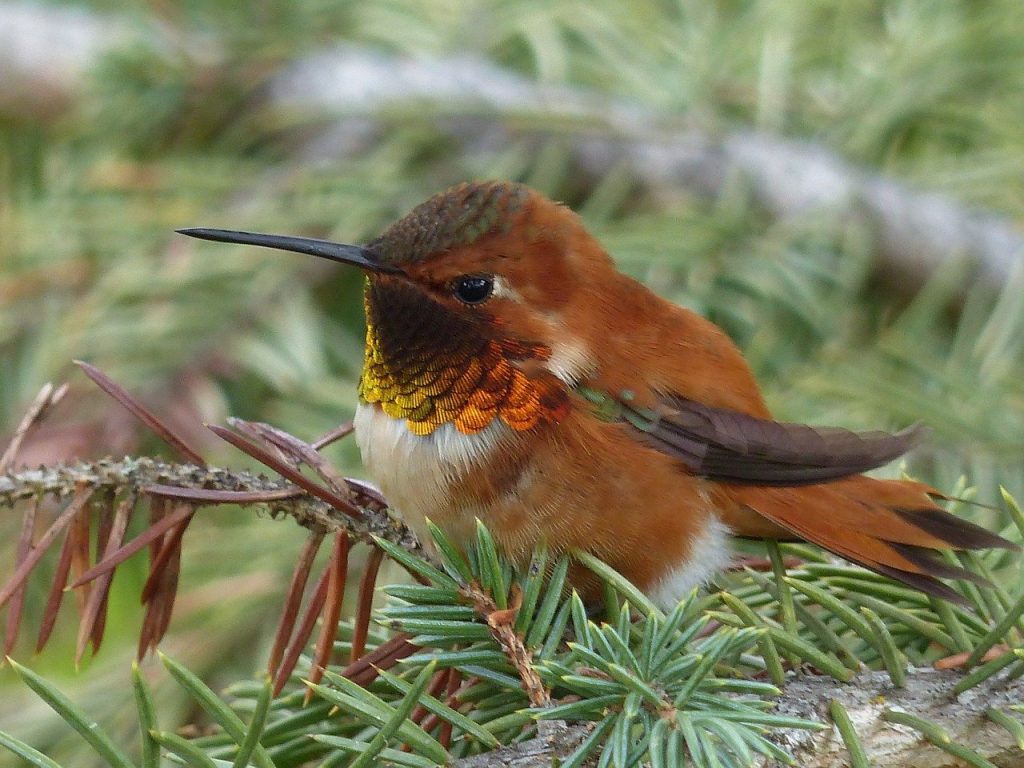 Birders and scientists observe two migration periods in hummingbirds. Firstly, there is the spring migration period in which birds fly (north or south) to their breeding grounds, beginning as early as February. Depending on the species, these breeding grounds range from Alaska to Argentina – so it’s a really broad range. Males usually arrive first.

Secondly, once the temperatures begin to drop in the deciduous forests after the birds have bred and fledged their young, these migrant species return to the tropics of Mexico, the Caribbean, and areas of Central America for wintering.

There are conflicting opinions on what triggers migration movements, so further study is important. Some scientists theorize that it has to do with dwindling daylight others. Other triggers likely relate to the abundance (or lack) of flowers, and evolved instincts.

The furthest north-breeding hummingbird is the rufous hummingbird. This species makes their winter homes along the Gulf of Mexico. This means that they have the longest migratory pattern of any bird in the world when compared to their body size. At about 3 inches long, the rufous hummingbird travels about 3,900 miles one way, all the way from Alaska.

But not all hummingbirds migrate. For instance, Anna’s hummingbird is a year-round resident of Florida, California, Texas, and other Southern regions of North America. They are territorial birds. Other year-round hummingbird species that do not migrate away from their territory include some ruby-throated hummingbirds, calliope hummingbirds, black-chinned, and Allen’s.

Ruby-Throated Hummingbirds: How Breeding And Migration Weave Together

Let’s focus on one species specifically: the ruby-throated hummingbird. They are an iridescent green bird with a white belly and a red band of color along the neck. You will see them humming around the regions of North and Central America. These migrating hummingbirds winter in tropical regions of Mexico, Costa Rica, and the West Indies.

In the breeding season (March-May), ruby-throats live in deciduous and pine forests. Males will first return to the breeding range before the females, where they will select their breeding grounds. When the females arrive, the males begin performing courtship displays. After copulating, the pair will go their separate ways and the female begins to build her nest – usually around 3 days after arriving. Females will use lichen, moss, and bark to construct their nest, which can be reused in subsequent years, though not necessarily by the same individual.

You can watch the path of the migration and arrivals through this interactive hummingbird migration map. 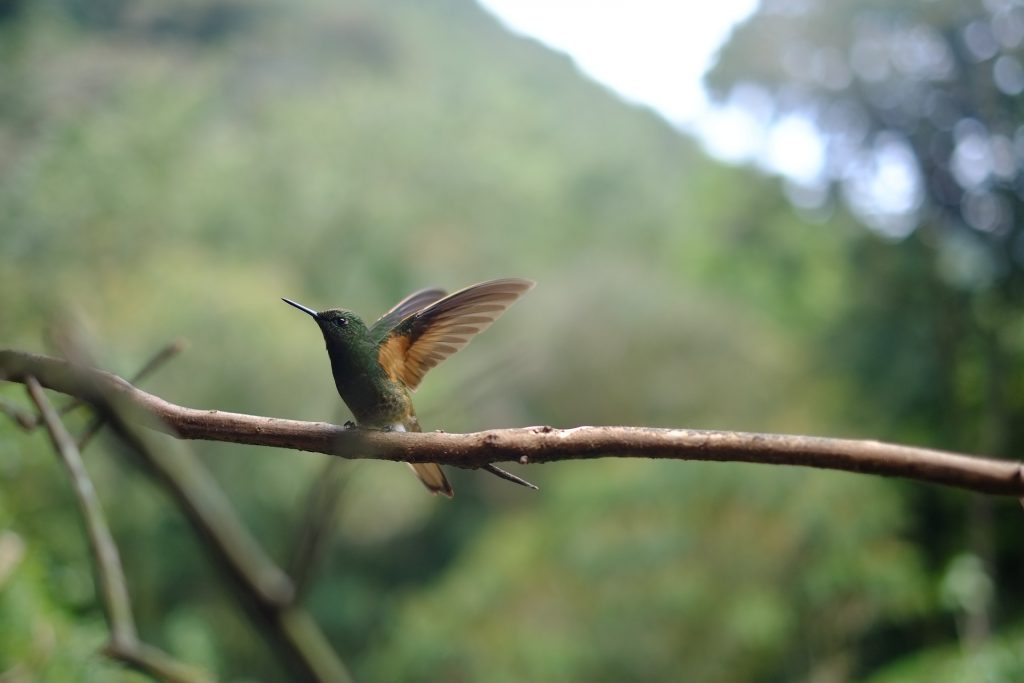 Attracting Hummingbirds To Your Home

Want to attract hummingbirds to your home? Easy – get rid of your lawn!

Easier said than done for some of us, of course. But if you have the resources and social capital to make decisions about your space, you can make big changes for these little birds. In reverting a chemically-treated patch of Kentucky bluegrass to a restored version of native perennials and annuals, the birds and other pollinators will find their way to you.

To specifically attract hummingbirds, plant red, bell-shaped flowers. Hummingbirds especially appreciate tubular blooms. For example, and depending on what is native to your area (and not invasive!) salvia, honeysuckle, and bee balm are good options to consider. . Hummingbirds have an affinity for the color and shapes of these blooming species.

You can also hang hummingbird feeders in your yard and experiment with different versions of hummingbird nectar recipes. Often, the feeders themselves are red in color, which will help to attract the birds to your yard, but there is no need to dye the nectar red with food coloring! Just plant more red flowers nearby instead. In the summer months, you’ll want to change this nectar regularly, as heat and sugar can ferment into alcohol.

If you have a cat that roams about the outdoors, you will want to keep them out of this area – otherwise, your yard will be less of a bird haven and more of an ideal feline hunting ground.

Who knows, before long, these backyard birds might just turn you into a bit of a birding enthusiast! 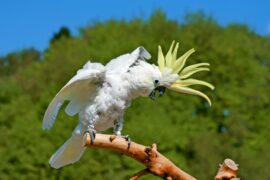 Cockatoos learn by copying others 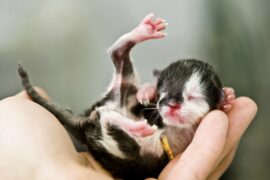