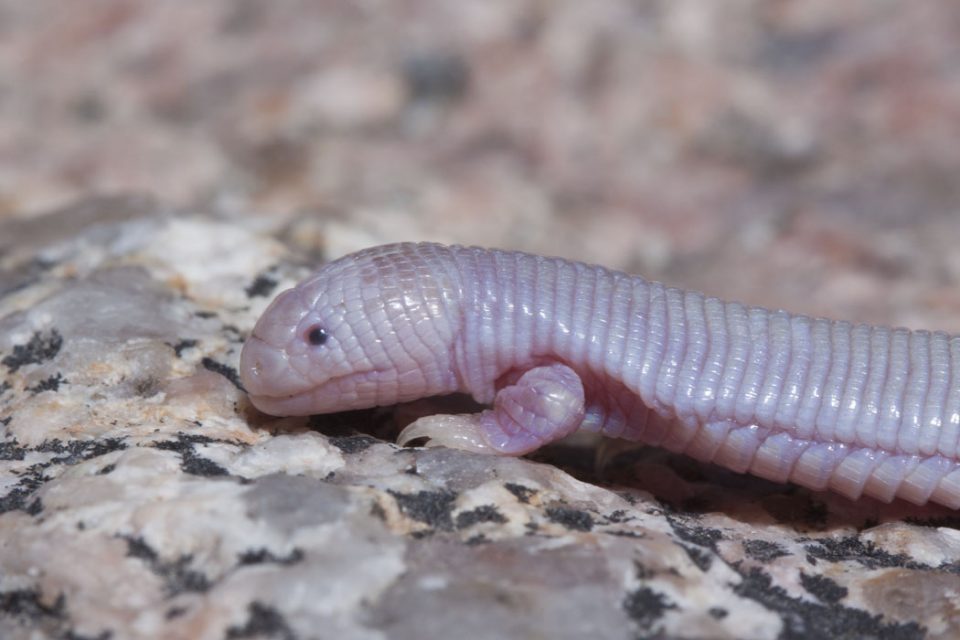 The above-ground world only reveals a small part of the diversity of our planet. The soil can provide protection from predators, rain and sun.

The cold-blooded (ectothermic) reptiles are particularly well-suited to an underground lifestyle. Below ground temperatures change less than on the surface. Burrowing underground can help them regulate their body temperature, an essential task for reptiles.

Some burrowing reptiles look far more like worms or moles than normal lizards. The similarity between these species is a great example of convergent evolution. When confronted with a similar environment, evolution finds a similar solution. Let’s take a looks at some of the most interesting underground reptiles. 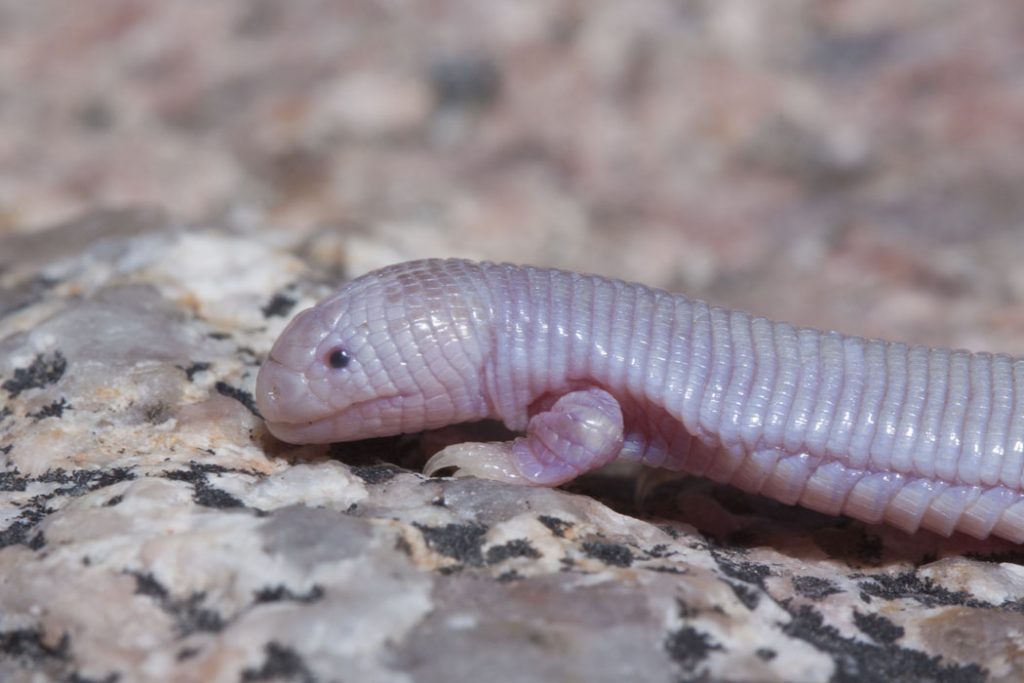 The mole lizards look like someone stitched the upper half of a mole onto a worms body. Unlike other underground lizards, they retain their front legs. The mole lizard is an unusual and interesting species.

There are 4 species of mole lizards currently known. They are in the genus Bipes, in the family Bipedidae, which contains no other groups. This group split from other living animals around 55 million years ago. All four of these species occur only in Mexico.

These cute underground creatures have an unsavory reputation. Some believe that mole lizards will enter humans while they use the bathroom. Next, they will shred your organs from the inside! Thankfully, this horrifying myth is entirely untrue. The mole lizard is a predator, but its prey has to be small enough and soft enough to fit in its small jaw. They generally eat ants, earthworms and small insects.

The mole lizard is not well studied. Their below-ground lifestyle makes them challenging to find. Their skin lacks the pigment melanin, which protects us from the sun. Because of this, they rarely come to the surface. They only come above ground at night or after heavy rain. Despite their cryptic nature, the genus is not considered to be at-risk of extinction.

The Madagascar blind snake is a rare and unique reptile. This species is endemic to a small area of Northern Madagascar. Because it spends most of its time underground, it is rarely seen. In fact, there were no verified sightings of this species for over a century!

At first glance, the Madagascar blind snake might be mistaken for a large earthworm. With pink skin and minuscule size, the resemblance is uncanny.

The Madagascar blind snake differs from its earthworm doppelgangers in one key way. It is a vicious predator! These tiny snakes prey on ants, termites, and other insects.

This snake is the only species in the genus Xenotyplops and the family Xenotyphlopidae. This group split from all other life 65 million years ago! This unique evolutionary history makes the Madagascar blind snake an important species to protect.

This species is still believed to be alive, but it is at great risk of extinction. Its small range and unique behavior present a risk to the survival of this species. Logging, charcoal production, and cattle grazing threaten this snake’s already small habitat. 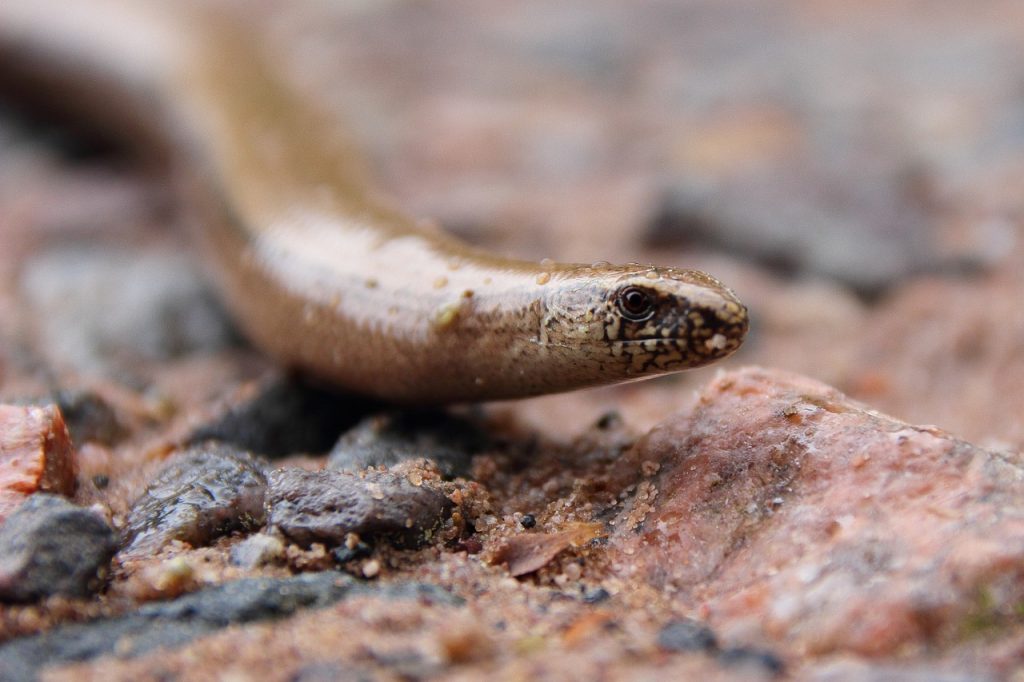 The worm lizard is another strange underground reptile. Though they lack limbs, much like snakes, they are actually an unrelated group. Though they have some superficial similarities, legless lizards and snakes have some key differences. Snakes don’t have moveable eyes or visible ear holes. Additionally, snakes use their ventral scales to move while worm lizards rely on the texture of the surface they are moving on. Legless lizards are also capable of shedding their tails.

These odd species look like an odd mashup of a snake and an earthworm. They move through the soils by burrowing with their hardened skulls. Most worm lizards are nearly blind. They don’t have much use for eyesight underground. Instead, worm lizards rely primarily on sensing chemicals. They pick up traces of chemicals on their tongues which they transfer to the vomeronasal organs in their head. This chemical sense is used to find prey and mates.

The worm lizards are in a class of reptiles called the amphisbaenians. There are 6 different families in this group. They are distributed throughout the world. They are most common in Africa and South America, and the Iberian Peninsula.

There are around 180 species of worm lizard. Detailed research has been done on very few of them. Those that have are not considered endangered. The population status of the remaining species is still unknown.

There are many more

These three examples are far from an exhaustive list of underground reptiles. There are many other species that live entirely, or partially underground. Even crocodiles spend a significant amount of their time below the surface. Many snakes take advantage of premade burrows for protection.