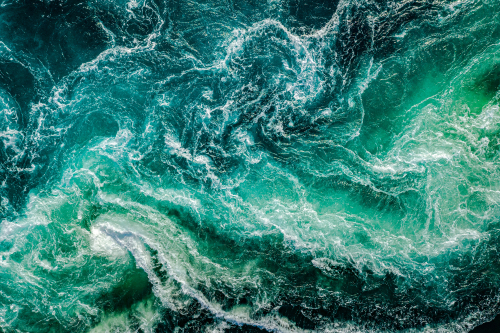 Earth’s waters are constantly moving. They change form in the water cycle. They flow from the tiniest streams to the biggest rivers. Even on the stillest days in the ocean, the water is never quite static. In fact, ocean water movement can be summed up in three genres: currents, tides, and waves. Though just a thin layer on the earth’s crust, the forces both on and outside our planet treat our oceans like putty. Celestial bodies like the sun and moon push and pull the oceans as the earth hurtles through space. Similarly, the Earth’s own gravity and rotation impact oceanic movement.

Currents are predictable and directional movements of water that persist for longer periods of time. Occurring at all ocean depths from the intertidal to the benthic zones, currents impact the earth’s climate by carrying pockets of heat around the globe.

A combination of wind, sun, gravity, and the Earth’s rotation influences our planet’s currents. And all four factors are quite interconnected. Radiation from the sun creates wind. Prevailing winds create peaks and valleys in the ocean water, while gravity pulls water toward the valleys. Finally, the Earth’s rotation is the soup spoon stirring the pot to create direction. 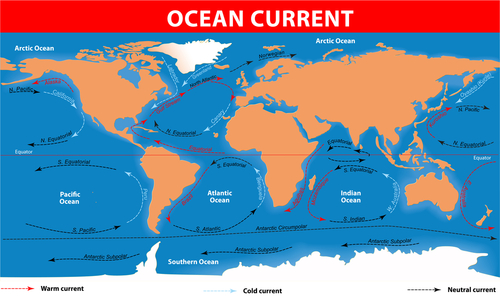 Ocean currents move water around the globe in a consistent and directional flow.

Similar to their impact on climate, the wind and sun control the ocean currents. Prevailing winds are air currents that stay consistent in a specific place or during a specific season. They push water around the globe in predictable patterns. But where do the winds come from? That’s where we look a bit further from the earth’s atmosphere… to the sun!

The sun’s radiation is strongest at the equator and dissipates toward the poles. Consequently (and perhaps obviously), the air at the equator heats up and moves north and south while the air at the poles cools down and moves toward the equator. Fronts of hot and cold air pockets collide to create pressure differentials. Combined with other factors, the resulting wind currents cause peaks and valleys in the ocean’s surface. Though they are subtle to an ocean traveler, the peaks are called “sea surface hills,” and can be detected by satellites.

The earth’s forces play a significant role in directing the ocean’s currents. The peaks and valleys created by the sun and wind are immediately at the whim of gravity. Gravity pulls the water down from the hills toward the valleys. But the water never travels in a straight line. Because of the earth’s rotation, gravity pulls the water into the valleys in a curving trajectory. These currents can be further explained by the Coriolis Effect. 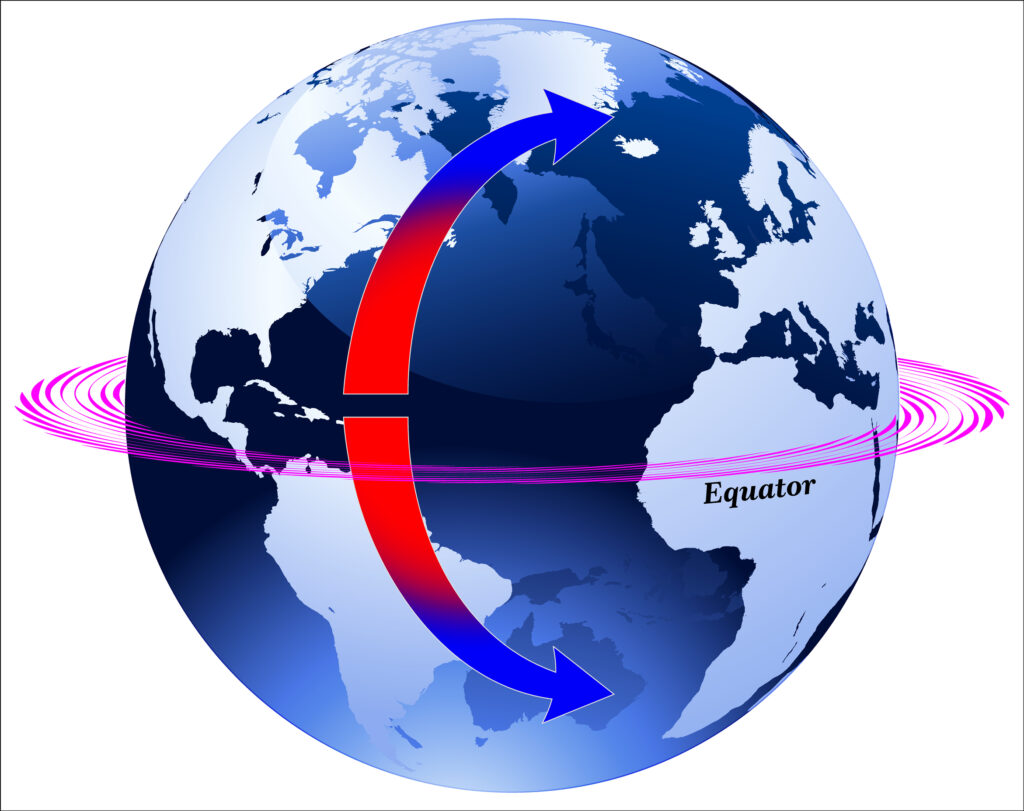 You’ve probably heard of the Coriolis Effect either in the context of climate or plane travel. The Coriolis Effect explains the influence of the Earth’s rotation on objects in a fluid environment (i.e. not on solid ground). Because the Earth is a sphere, a point on the equator (the largest circumference) will travel at a higher velocity than a point closer to one of the poles. This gets really interesting when we think of how this impacts currents.

Water depth does impact these trends. As the ocean deepens, the Coriolis Effect pulls water at slightly different angles.

Just as currents move different temperatures of water around the world, they provide free transportation for ocean life. Turtles and whales use currents to help speed up their annual migrations across the open ocean. Additionally, many species find new homes and increase their genetic diversity by traveling with currents. And not just animals use them! Currents carry mats of seaweed, ocean algae, and even debris like logs and trash across the globe.

While ocean currents take water thousands of miles around the globe, waves move water at a much smaller scale. Though waves impact a microcosm of the earth, they have a powerful influence on local ecosystems and coastlines. Ocean waves form due to the force of the wind rushing across the surface of the water. They are distinct from currents and tides because of their shape, longevity, and direction.

The wind speed, duration of gust, and the area of water that the wind blows over (aka the fetch) impact the wave height. The famous surfing waves of Hawaii, Tahiti, and California result from a long buildup over huge expanses of open water. Waves can also be tiny. They are considered mere ripples when they are less than one foot tall. To measure a wave, scientists use the same vocabulary that sound waves are measured in, including trough and crest, amplitude, and frequency. 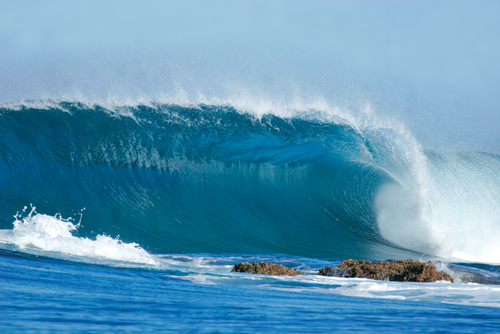 Consistently large waves like those in Tahiti attract surfers.

Though small in scale compared to currents and tides, waves exert a powerful influence on coastal areas due to their repetitive nature. Everything from shallow water waves to tidal waves shapes coastlines by adding and taking away substrate. Through this give and take, waves create shoreline habitats.

Tides are distinct changes in sea level across great expanses due to the gravitational pull of the sun and moon. Essentially, large waves that rush from one side of the ocean to the other, tides create a huge impact on the earth’s shorelines.

A flood tide describes the time when the rising water covers the intertidal zone to reach its maximum water height at high tide. Subsequently, the water lowers to reveal the intertidal zone, called the ebb tide. Finally, the low tide means the water reaches its lowest level and begins the process again.

What Causes the Tides?

Tides are caused by the gravitational forces of the moon and sun on the earth’s oceans. Due to the moon’s orbit, it changes location throughout the day. Depending on which side of the earth it’s on, it pulls the world’s oceans in that direction.

Though tidal patterns are primarily impacted by the moon’s position, gravity from the sun can also play a role. When the sun and moon line up with the earth at a new moon and full moon, they create a celestial event called a syzygy. In these moments, the sun amplifies the gravitation pull of the moon. Consequently, the tides intensify with highs and lows reaching monthly extremes. These events are known as spring tides.

On the other hand, a half-moon forms a 90° angle with the earth and sun, completely losing any amplification from the sun. Half-moons produce neap tides which are the monthly minimums of the tidal range.

Operating on a slower timescale than waves, though with similar predictability, tides impose an enormous influence on the world’s ecology. Tidal pools provide sanctuary for delicate marine invertebrates and a reliable food source for the shorebirds and marine mammals that peruse tidal zones. Some creatures, like sea turtles, rely on the outgoing tides to help with juvenile dispersal. 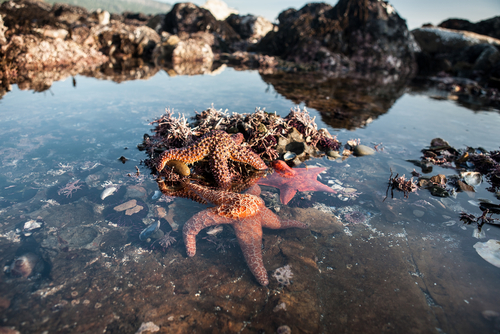 Marine and coastal wildlife aren’t the only creatures that rely on the tides for habitat and food. Humans have learned to harness tidal power for our own benefit. Similar to harnessing the wind, using turbines to capture tidal energy provides a sustainable energy source for coastal communities worldwide.

The complexities of the oceans don’t stop here. The saying that we know more about the surface of the moon than we do about the oceans continues to prove itself true as marine biologists continue to make new discoveries. While we still have plenty to learn about the ocean in general, having a greater appreciation for the distinct ways that the oceans move is a good start.