Welcome to the Dystopian Life of a Drone Bee • Earth.com 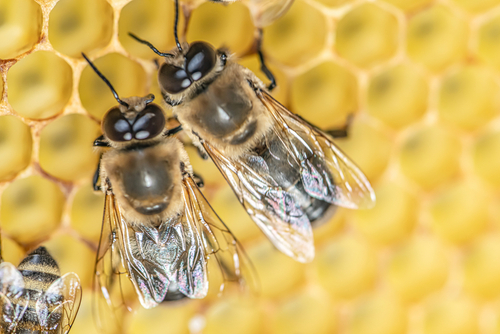 Welcome to the Dystopian Life of a Drone Bee

The honey you enjoy with breakfast or tea required the selective, brutal killing of an entire class of bees. Worker bees systemically evict each and every drone bee at the beginning of winter. These workers make sure all, and I mean all, of the drones die. Workers ensure this drone death by biting drone wings off and dragging their brothers out of the hive. Why would worker bees be so awful to their own brothers?

Not all honeybees are created equal. There are three kinds of honeybees; the queen, the worker, and the drone. Each type of bee performs its own function, which is crucial to the continuation of the hive. Interestingly, all three types of bees, even though they are very different, are part of the same species. Apis mellifera, or the western honeybee, is the typical bee raised by beekeepers in the U.S. There are a handful of other honeybee species. All honeybee species have a similar caste system.

Surely you have heard of the all-important queen bee. Layer of eggs! Controller of the hive! Queen bees enjoy enormous power within their colony. Each colony has just one queen. This queen lays (almost) all of the eggs in the entire colony. She decides what ratio of workers to drones she wants.

The queen lives inside the hive. A typical queen will make only one flight out of the colony in her entire life. More on that “nuptial flight” later.

If a hive needs a new queen, workers will select a larva in a queen cell and feed it royal jelly. This will turn an ordinary worker larva into a queen.

The worker bee is the bee you see on the day to day. These bees are all female. They gather pollen from flowers, produce honey, clean the hive, and mercilessly kill their drone bee brethren when the time comes. The vast majority of bees in a colony are worker bees.

The drone bees are the male honey bees of the hive. Drone bees have just one major purpose; spread the genetic seed from their colony far and wide. Drone bees’ only purpose is to mate with other hives’ queens. This is important because a drone successfully mating with a different colony’s queen is the only way a colony can ensure their genetic material survives into the future. However, as we will see, drone bees are really just sperm vessels. They sadly don’t get to make their own choices, plan for the future, or see their own children.

While hives may have thousands of workers, the number of drones will be in the low hundreds.

A Quick Bit on Honeybee Reproduction

A queen bee has tons of eggs and sperm inside of her. She stores the eggs and sperm in different internal compartments and can choose when to use each. Drones come from unfertilized eggs and are haploid, meaning they only have one set of genes from the queen. When the queen wants more workers, she opens up both chambers and lays fertilized eggs. The queen lays these eggs into brood cells, which are the cells of the familiar honeycomb pattern.

Honey bees begin as eggs, turn into worm-like larva, transform into pupa, and then finally into adult bees. Each hexagon can house one honeybee larva. Worker bees feed the larvae until the larvae are ready to turn into pupae. When they are ready to pupate, worker bees seal up the top of the brood cell and let the larvae transform in a private chamber. Because drone pupa are larger than worker pupa, the seals on their brood cells is raised slightly higher than the top of the honeycomb. These brood cells are called drone cells.

If you’re a beekeeper, you surely know about varroa mites. These mites live in bee colonies and can destroy the colony at a high enough density. Drone’s take more days to pupate than worker bees. Varroa mites prefer drone brood cells to worker brood cells because the mites have more time to reproduce.

When spring comes around, drone bees eagerly burst out of their sealed-off brood cells as fully formed, adult drones.

Drone bees are mostly useless. In fact, they often need female worker bees to bring them food so they don’t starve.  These drones lay low for about 12 days as they gather up energy and let their reproductive organs mature. After the drones have gotten used to their new, adult bodies and packed on some weight, they are ready to mate.

A drone bee typically only lives about 20 days, but can occasionally live up to 60.

Successful mating is the highest aim of a drone bee. Unfortunately, only 1 out of 1000 drones mate with a queen. What happens to the other 999? More on that sad story later…

Scientists have found that honeybees will use the same drone congregation areas year after year. This is odd since none, since all of the drones are new to the world and haven’t been to the congregation area before.

A new queen bee doesn’t have any sperm to fertilize her eggs. Fertilization is necessary to make worker bees, and therefore essential to the continuation of the colony. When the virgin queen is ready, she departs from the hive on her nuptial flight. On this nuptial flight, a queen seeks out a drone congregation area. Once there, the drones intensely pursue the queen in a desperate attempt to mate with her. Drone bees have extra large eyes so that they can detect and follow the queen when she arrives.

A queen mates with up to 20 drones, at which point she considers herself sufficiently inseminated for the rest of her life. She will fly back to her hive, likely to never see the light of day again.

The Unexpected Consequences of Mating

So the few ‘lucky’ drone bees successfully mate with a queen. Do they get to revel in the fact that they beat out 99.9% of their drone peers? They sure don’t!

You’ve likely heard that a bee can only sting once and dies shortly thereafter. Any honeybee that stings is a worker bee. When worker bees sting, they rupture their abdomen to release the stinger. This causes their death.

In contrast, drone bees don’t have stingers. Instead, they have penises. The drone bee is so desperate to inseminate the queen that he inverts his entire reproductive system from inside his body to outside his body when mating. This force helps push the semen into the queen. As a result, a portion of the drone bee’s abdomen is ripped away from itself as it falls away from the queen bee. The drone falls to the ground and bleeds to death, similarly to how a worker bee who used her stinger dies.

That’s the fate of the lucky drones.

A Drone Bee Who Has Failed Can Try Again

Just like human-made drones, drone bees have a surprisingly short flight time. They can fly about 20 minutes before they must return to the nest and refuel. If a drone doesn’t successfully mate on a flight, they will continue trying until there are no longer queens looking for mates.

Drones Who Don’t Mate Are Killed by Worker Bees

The 99.9% of drone bees who don’t mate also have unfortunate deaths. Those who die away from the hive have it much better off than those who survive to the end of fall. Once the temperature in the fall drops enough, the queen tells to worker bees to evict all the drones from the hive.

No bee mating happens in the winter. A drone bee’s only purpose is to mate. Therefore, the drones have no purpose in the winter. Why would the workers want to feed their precious resources to keep their useless brothers alive all winter? Well, they don’t!

Instead, the worker bees drag each drone bee out of the hive. Since drones are slightly larger than workers, multiple workers gang up on a drone to drag it out of the hive. The workers then proceed to bite off their brothers’ wings, push them off the hive, or do any other brutal act necessary to rid the colony of these useless bees.

Worker bees will even evict poor larval drones. So sad!

If we don’t impose our own human emotions and experiences onto these bees, we can instead see the drone eviction as merely a necessary part of insect communal living.

While drone death is a natural part of the bee lifecycle, there are plenty of unnatural threats to bees across the U.S. The widespread and increasing use of pesticides is a major threat to bees, contributing to colony collapse that has killed 40% of honey bee colonies in a single year. About one third of the types of food we eat is directly pollinated by bees.

In addition to honey bees, native bees like bumblebees struggle with habitat loss, pesticide use, and climate change. Buying food grown without pesticides, pressuring elected officials to curtail pesticide use, and educating your friends and family about bee conservation are ways to aid the efforts to keep our food-producing insect friends healthy.