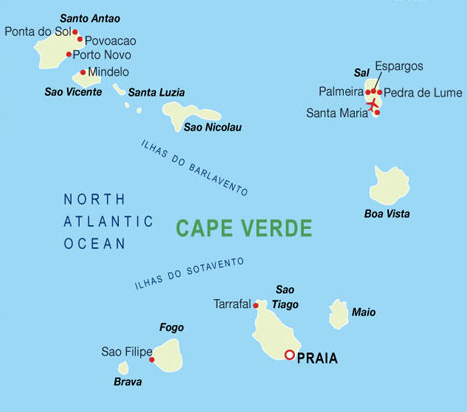 Cape Verde Islands, an island country in the Atlantic Ocean off the coast of Africa, is clearly visible in this image acquired on October 17, 2005. The islands total about 4,000 square kilometers (1,500 square miles) in area, slightly larger than the State of Rhode Island in the United States.

Therefore islands were claimed by Portugal in 1456; they declared their independence in 1975. Throughout its history, Cape Verde has been an important commercial port, serving at various times the slave trade, whaling, and transatlantic shipping. Commerce and tourism remain its dominant economic activities. All but one of the ten major islands are inhabited; the other, Santa Luzia, is a wildlife preserve.

Also ne of the islands, Fogo, contains an active volcano. This stratovolcano (a large cone-shaped volcano, like Mt. Rainier) measures 8 kilometers (5 miles) in diameter and last erupted in 1995. The rugged and mountainous islands have a warm, tropical climate and are often subjected to severe droughts.