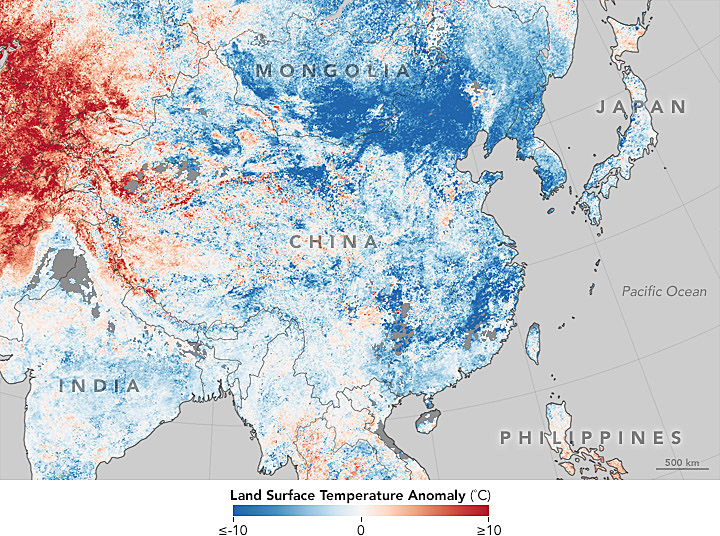 This temperature anomaly map is based on data from the Moderate Resolution Imaging Spectroradiometer (MODIS) on NASA’s Terra satellite. It shows land surface temperatures (LSTs) from January 17–24, 2016, compared to the 2001–2010 average for the same eight-day period. Red colors depict areas that were hotter than the average; blue colors were colder than average. White pixels were normal, and gray pixels did not have enough data, most likely due to excessive cloud cover.

Weather Underground blogger Bob Henson reported that the January chill stemmed from the polar vortex—an upper-level circulation pattern that rings the Arctic. The vortex extended southward, allowing the development of a strong Siberian high. This cold, dense, low-level air mass then spread southeast across the continent.

According to news reports, the temperature in Bangkok, Thailand, dipped to 16°C (61°F); lows there typically stay above 20–25°C. Taipei, Taiwan, got down to just 4°C (39°F), a low not seen in 44 years. Snow fell in Japan and South Korea, stranding travelers.

Farther north, Mongolia and Inner Mongolia also saw anomalously low temperatures in January. In Eergu’Na, Inner Mongolia, temperatures reached a record-low of -47°C (-53°F). The cold weather in Mongolia, however, goes beyond the timespan portrayed in this this map. Extremely low temperatures and heavy snowfall—a winter phenomenon locally called dzud—have persisted since November 2015 and are expected to affect almost 1 million people, according to Reliefweb. Animals are vulnerable as well; Mongolia lost about 20 percent of its livestock during the 2009-2010 dzud.