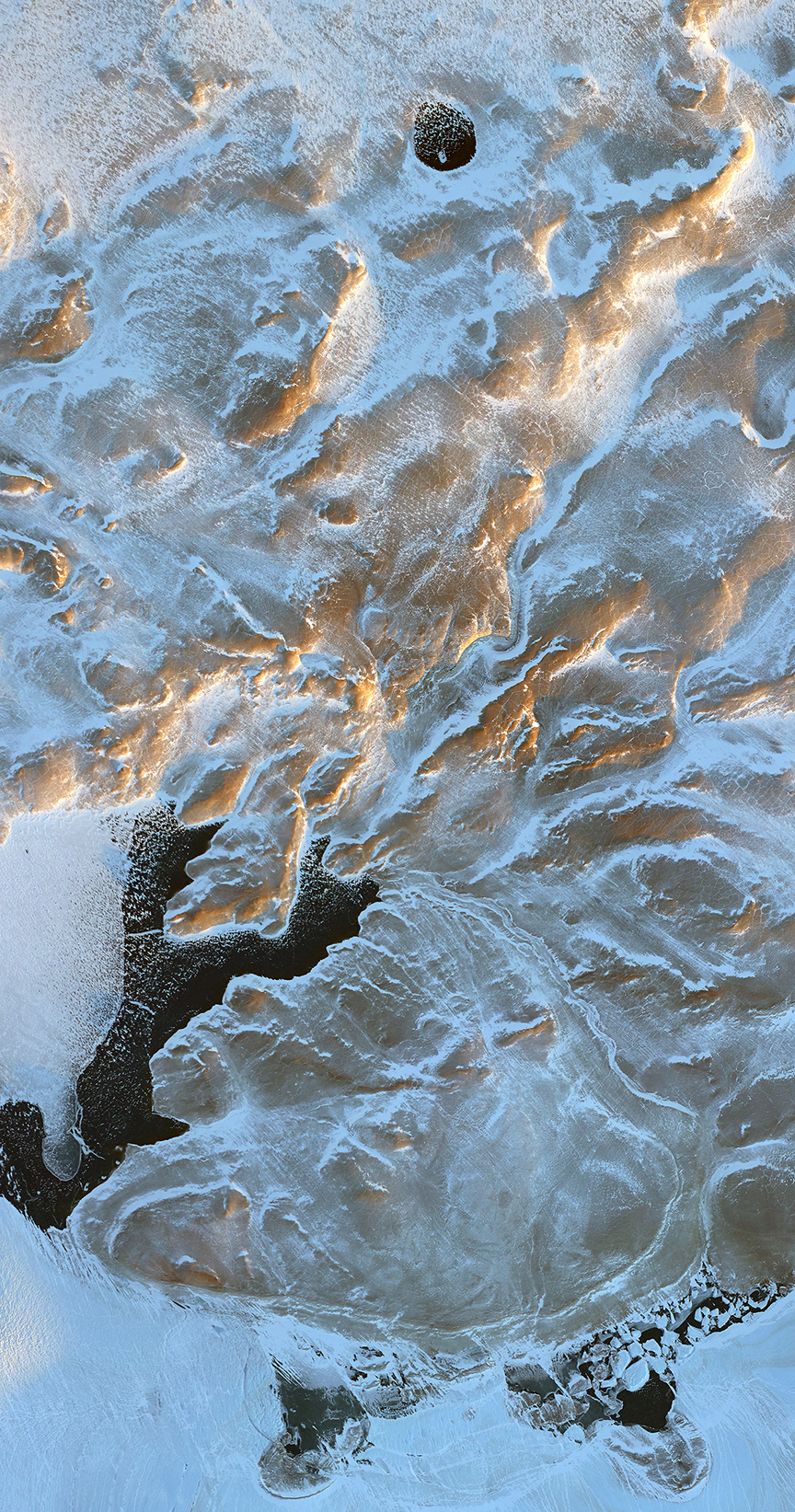 In Greenland, snow and ice dominate much—but not all—of the landscape. This image mosaic shows an aerial view of a largely ice-free area near the western coast of North Greenland.

Rocky areas in the scene are part of Daugaard-Jensen Land, which together with the greater Washington Land Group form the peninsula that juts into the Kane Basin waterway. Use Worldview to zoom out and get a broader sense of the image location, which is centered at approximately 79.9 degrees N and 61.3 degrees W. Note that the north arrow points slightly left of center.

Washington Land is no stranger to ice, however, situated between two major glaciers. To the south, Humboldt Glacier flows westward toward the sea. This 100-kilometer-wide glacier is the widest marine-terminating outlet glacier in Greenland. Only Humboldt’s northernmost edge is visible in this image.

To the north (outside the scope of this image), Petermann Glacier also flows westward toward the sea. Petermann is much narrower than Humboldt, but drains a large area of the Greenland Ice Sheet and has been known to shed some significant icebergs. Together, the Petermann-Humboldt sector holds enough ice to raise global sea level by 0.6 meters (2 feet) if it were to melt and enter the ocean. Already, the area is undergoing widespread change.

To keep up with the changes occurring at Petermann Glacier and to better understand the physical factors at play, NASA makes intermittent science flights over the glacier. For example, such surveys have been a component of NASA’s Operation IceBridge campaigns.

On October 6, 2015, IceBridge scientists surveyed Petermann with instruments installed on NASA’s Falcon 20. Next they passed over Daugaard-Jensen Land, which was when the Digital Mapping System (DMS)—a digital camera installed in the aircraft’s belly—acquired the eight images that compose this mosaic. See the complete flight path for October 6 here.

Some of the rocky slopes are painted with a golden glow, due to the low angle of morning sunlight during the Arctic fall. The fall season also brought limited hours of sunlight, which posed a challenge for IceBridge mission planners looking to maximize the collection of science data.

“This time of the year in the Arctic, we lose seven minutes of sunlight every day,” said mission scientist John Sonntag in a feature story describing the campaign. He added that by the campaign’s end in late October 2015, daylight had decreased to about nine hours a day, “barely enough to squeeze in our daily two three-and-a-half-hour flights, plus refueling.”