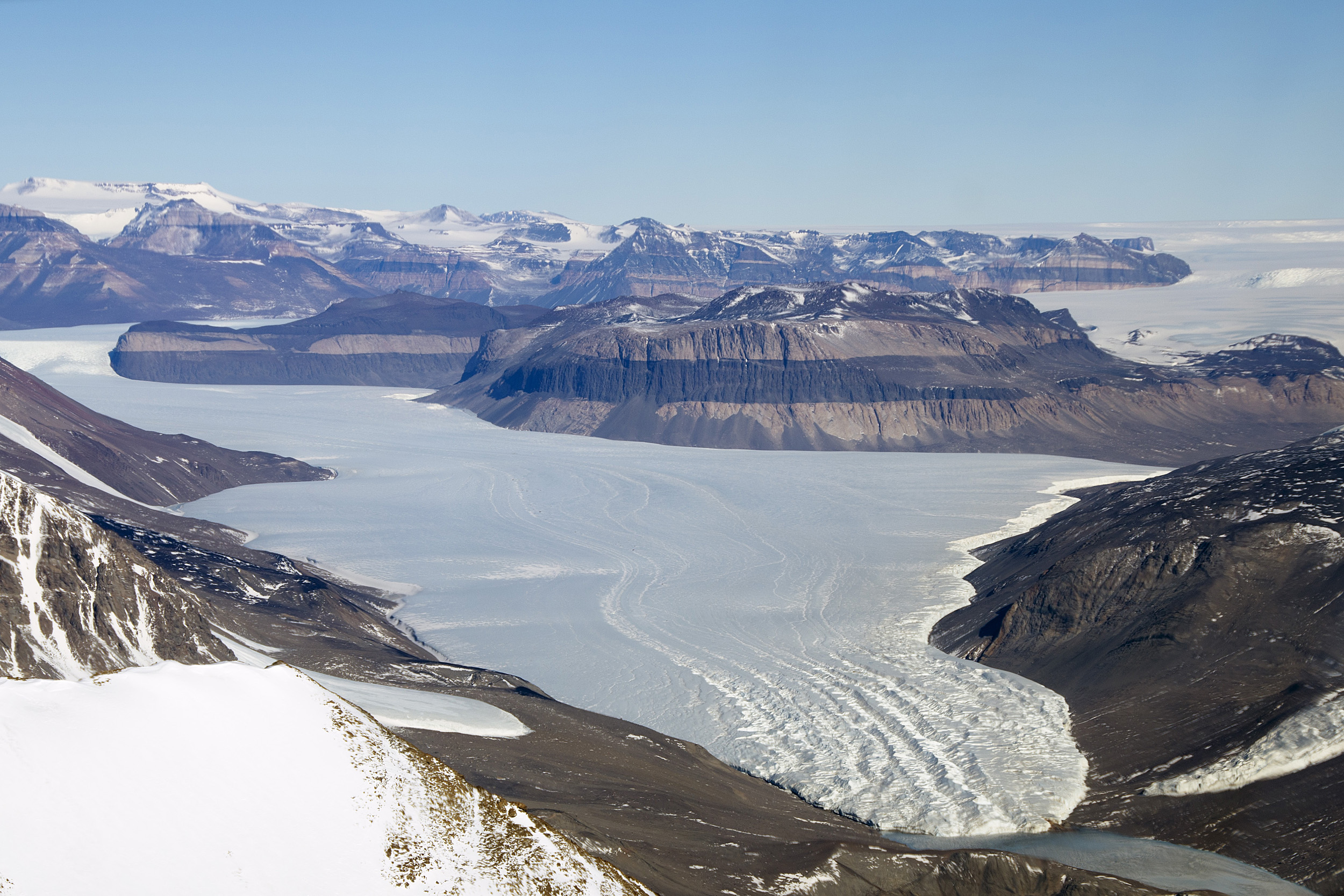 While flying over Antarctica aboard a P-3 aircraft in November 2013, Operation IceBridge project scientist Michael Studinger took this photograph (top) of Taylor Valley, one of Antarctica’s unique dry valleys. Home to Taylor Glacier, striking rock outcrops, and Blood Falls, the valley is one of the most remote and geologically exotic places in the world.

While ice and snow covers most of Antarctica, Taylor Valley and the other dry valleys are conspicuously bare. Inland mountains—the Transantarctic Range—force moisture out of the air as it passes over, leaving the valley in a precipitation shadow. The lack of precipitation leaves dramatic sequences of exposed rock. In both the satellite image and photograph, the tan bands are sandstone layers from the Beacon Supergroup, a series of sedimentary rock layers formed at the bottom of a shallow sea between 250 million and 400 million years ago. Throughout that period, Earth’s southern continents were locked into the supercontinent Gondwana.

The dark band of rock that divides the sandstone is dolerite (sometimes called diabase), a volcanic rock that forms underground. The distinctive dolerite intrusion—or sill—is a remnant of a massive volcanic plumbing system that produced major eruptions about 180 million years ago. The eruptions likely helped tear Gondwana apart.

The dominant feature in the photograph—Taylor Glacier—is notable as well. Like other glaciers in the Dry Valleys, it is “cold-based,” meaning its bottom is frozen to the ground below. The rest of the world’s glaciers are “wet-based,” meaning they scrape over the bedrock, picking up and leaving obvious piles of debris (moraines) along their edges.

At the lower right of the photograph, “Blood Falls” appears as a small, dark smudge. The name refers to the stain of red that coats part of the glacier and seeps down toward Lake Bonney in a pattern that makes it look like a blood-red waterfall. The red comes from microbes living within a pool of ancient seawater that has been trapped beneath Taylor Glacier for at least 1.5 million years. Due to the activity of the microbes, the seawater is enriched with ferrous hydroxide (an iron-containing salt), which quickly oxidizes and turns red as it seeps out of a crack in the glacier.