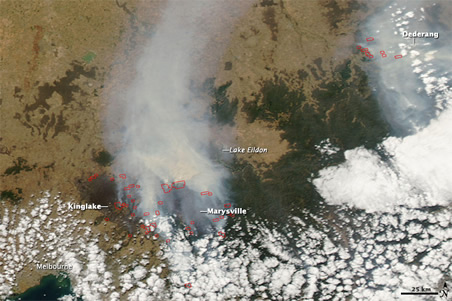 Across fires in southeastern Australia, numerous fires were burning when the Aqua satellite passed over head on April 7, 2004. The Moderate Resolution Imaging Spectroradiometer (MODIS) sensor on the satellite collected this image and detected the locations of the actively burning fires, which are marked in yellow in this image. Fires are scattered across (clockwise from top left) South Australia, New South Wales, Victoria, and Tasmania (bottom right corner).

In New South Wales and most of Victoria, the fires are located away from dense vegetation, which appears deep greenish-brown. Also This pattern, as well as the season, suggests they are agriculturally related fires, perhaps pasture burning.Fires in Southeast Australia Though not necessarily immediately hazardous. Also such large-scale burning can have a strong impact on weather, climate, human health, and natural resources.

The smokier fires on Tasmania and in eastern Victoria may be of a different nature—possibly wildfires or prescribed fires in forest lands. Therefore high-resolution image provided above is 500 meters per pixel. The MODIS Rapid Response System provides this image at additional resolutions. Fires in Southeast Australia are common and known to happen during dry storm season. Therefore the smoke you see in image are from the fires causing massive damage and unhealthy air quality. Also the smog is in the air that causes a very harmful and unsafe environment.