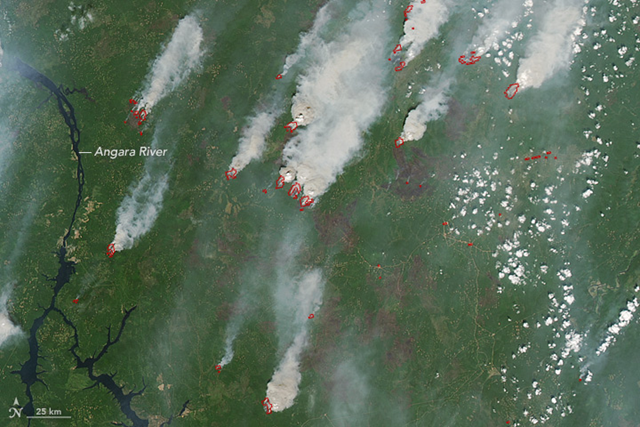 Hundreds of forest fires surrounding Lake Baikal continue to burn across the boreal forests of Russia, producing thick plumes of smoke that are spreading as far south as South Korea and central China, and as far east as North America and Europe. This Moderate Resolution Imaging Spectroradiometer (MODIS) from the Aqua satellite on May 26, 2003, shows the locations of the fires around Lake Baikal marked with red dots.

According to scientists in the area, the first fires seen in the region were the typical agricultural burning seen in the spring as farmers prepare land for planting. However, after those fires had begun, the region suffered a long dry spell that even included a sandstorm.

To the west of Lake Baikal (centered in the image) mature and “over mature” spruce forests are burning. These forests contain large amounts of peat on the forest floor, which produces thick smoke when burned. To the south of the lake, mixed forest types are burning, while closer to the Sayan Mountains in the southwest, cedar forests are burning. The more northern fires to the west of Baikal are not typical for this time of year (usually occurring much later in the summer), and they are suspected to be due to arson by people hoping to make money on salvage logging. To the east of the lake, in the Chita region, deciduous needleleaf forests are burning. For more information about fire monitoring in Russia, visit the National Forest Fire Center of Russia