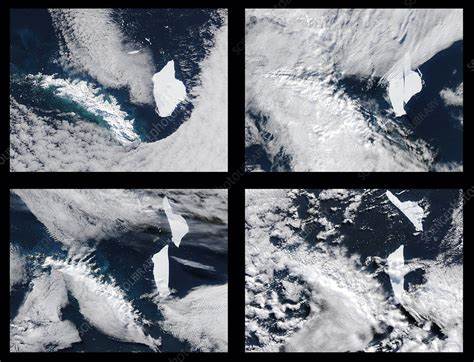 Fracture Appearing in Iceberg A-38B Off South Georgia. Large chunks have been breaking off the A-38B iceberg, which appears to be lodged northeast of South Georgia Island in the South Atlantic Ocean. The iceberg was originally part of the massive A-38 iceberg, which broke from the Ronne Ice Shelf in Antarctica around October 13, 1998. At the time, the A-38 iceberg was more than 90 miles (144 km) long and 30 miles (48 km) wide, the largest iceberg that had been observed in a decade. By October 22, 1998, A-38B had started to break off the original iceberg. The pieces drifted about 1,500 nautical miles north to their present location around South Georgia Island in the South Atlantic.

The A-38B iceberg broke in half in April 2004. On August 20, a large slice had broken off the remaining section of the iceberg and was drifting north. On August 16, the faint outline of a crack can be seen where the iceberg later broke. Also Fracture Appearing in Iceberg A-38B Off South Georgia in the image. Therefore No permanent native population lives in the South Sandwich Islands. Also a very small non-permanent population resides on South Georgia. There are no scheduled passenger flights or ferries to or from the territory. Although visits by cruise liners to South Georgia are increasingly popular, with several thousand visitors each summer.