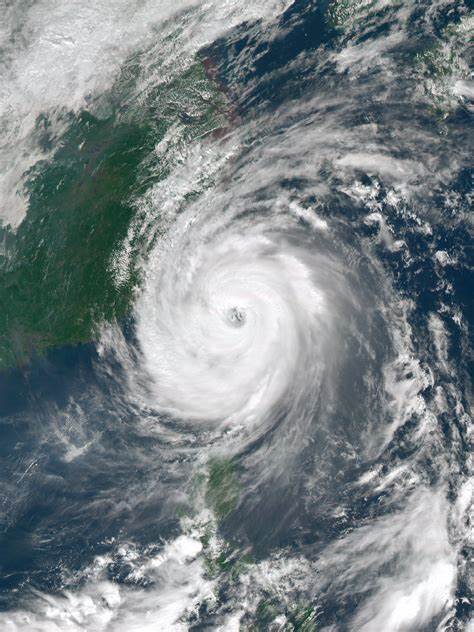 After raking across the Philippines on October 18, 2010, Typhoon Megi re-emerged over the South China Sea and began to intensify again. By the time the Moderate Resolution Imaging Spectroradiometer (MODIS) on NASA’s Aqua satellite acquired this image at 1:30 p.m. local time (5:30 UTC) on October 20, 2010, the storm had again reached Category 4 status. The storm is sprawling, covering much of the South China Sea in this image. At the time, Megi had winds of 210 kilometers per hour (115 knots or 130 miles per hour) and was gradually weakening. The Joint Typhoon Warning Center forecast that Typhoon Megi would move ashore over south China late on October 22 or early on October 23.

Typhoon Megi (pronounced [me̞.ɟi]), known in the Philippines as Typhoon Helen, was a large and powerful tropical cyclone which affected Taiwan and eastern China in late September 2016. It is the seventeenth named storm and the seventh typhoon of the annual typhoon season. A tropical disturbance formed northeast of Pohnpei on September 19. Two days later, the Japan Meteorological Agency (JMA) upgraded the low-pressure area to a tropical depression early on September 21, and the Joint Typhoon Warning Center (JTWC) also issued a Tropical Cyclone Formation Alert shortly after that;however, the low-level circulation center (LLCC) of that disorganized system was exposed with fragmented convection. The JMA upgraded the system to a tropical storm and named it Megi early on September 23, when the JTWC also indicated that the monsoonal circulation had consolidated, resulting in upgrading it to a tropical depression but lacking of a definitive center. Six hours later, the JTWC upgraded Megi to a tropical storm. When formative banding and cloud tops were improving and cooling late on the same day