High-Altitude Cirrus Clouds Off The Coast Of Chile • Earth.com

High-Altitude Cirrus Clouds Off The Coast Of Chile 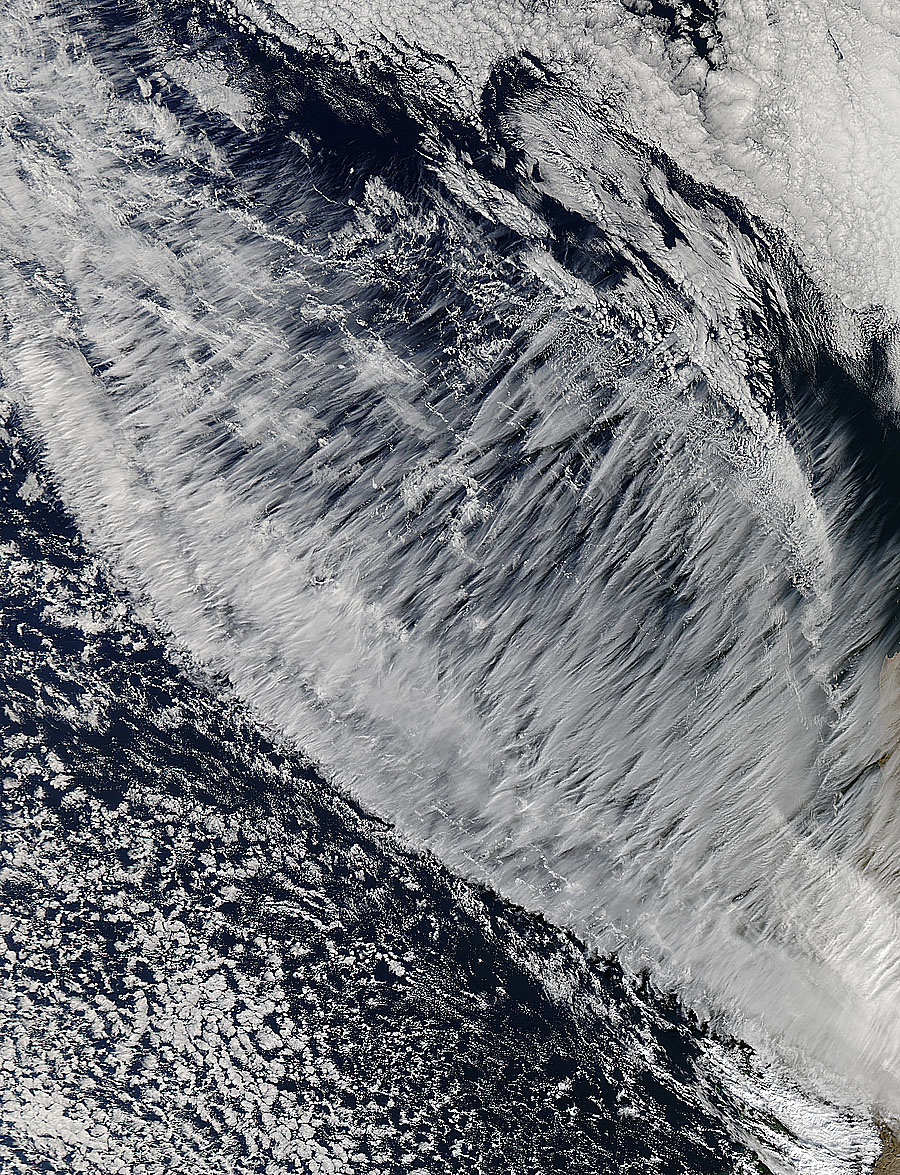 High-Altitude Cirrus Clouds Off The Coast Of Chile. What are those strange filament-like clouds fanning out over the Pacific Ocean? Scientists agree that they are high-altitude cirrus clouds. But which type of cirrus is less clear.

On May 21, 2015, the Moderate Resolution Imaging Spectroradiometer (MODIS) on NASA’s Aqua satellite acquired this natural-color image of cirrus clouds that formed off the coast of Chile. They are relatively thin and wispy and run diagonally across the image.

“These clouds might not be all that unusual, but certainly the image is striking,” said NASA atmospheric scientist Tony Del Genio.

According to NASA atmospheric scientist Patrick Minnis, the clouds likely formed at high altitudes along the jet stream. Relatively moist, lower-level air is pulled into the upper layers, where it then cools and forms cirrus ice crystals. The cirrus then spread out and form the diverging plumes visible throughout most of the image. The cloud tops reach up to about 13 kilometers (43,000 feet) and the winds are well over 100 miles per hour, Minnis said.

A false-color view of the same scene supports the idea that the clouds are cirrus. In that temperature map, the clouds are dark purple, which means they are cold—likely containing ice crystals—and reside high in the atmosphere.

NASA scientist Ann Fridlind noted: “These cirrus clouds could be a dense configuration of the classic mares’ tails formation,” which fan out into a shape that resembles horses’ tails. In this case the spread could be caused by clear-air turbulence or by wind shear.

Minnis thinks the clouds could be cirrus fibratus or cirrus radiatus. “Most clouds are classified by what they look like from below, making it difficult to identify them from satellite using the classic system,” he said. “From below, the big fans might appear to be cirrostratus.”

In contrast to the high-altitude cirrus clouds, a deck of low-altitude stratocumulus is visible in the upper right corner of the image. This cloud type is typical off the west coasts of continents, particularly Chile. But they also occur off the coast of California, Namibia, and to a lesser extent off the coast of Portugal and western Australia.

According to Del Genio, stratocumulus clouds form at low levels over relatively cool ocean water, in a region where the air above is gently descending. The descent dries the higher-altitude air and prevents clouds from forming there, and produces a temperature inversion about a kilometer above the surface. Near the surface, water evaporates from the ocean and gets mixed upward by turbulence. It reaches the inversion—which puts a lid on further ascent—and the air cools and saturates, forming the cloud deck.

The holes visible in some parts of this deck are pockets of “open cells” that may occur when drizzle forms or for reasons having to do with aerosols, Del Genio said. “There is not yet good understanding of what makes these pockets of open cells.”