Flooding On The Arkansas River 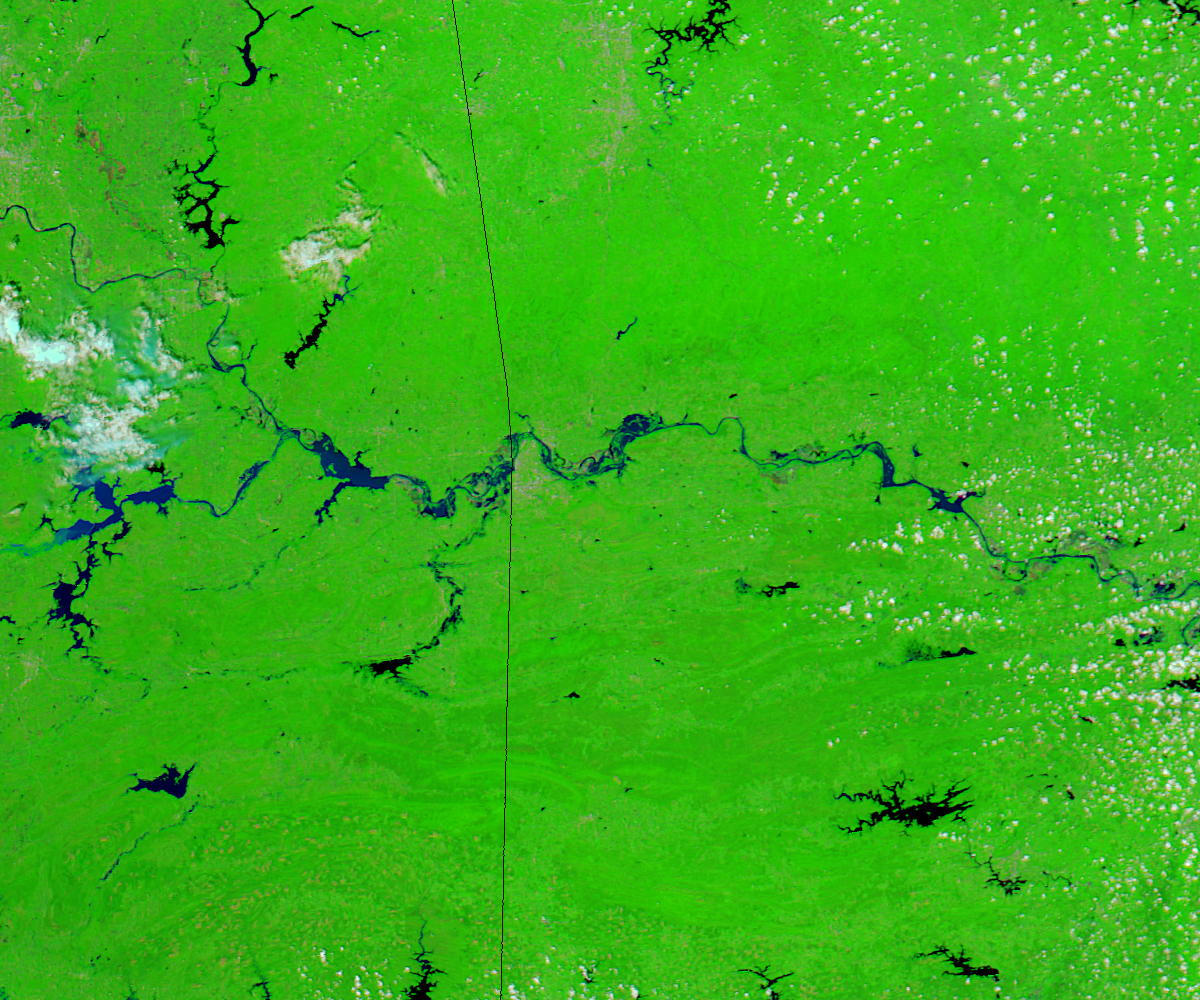 May 2015 has brought record to near-record rainfall in much of the deep southern United States. That water has filled lakes, streams, and rivers to the brim, and several have flooded, leading to property losses and evacuations in Arkansas, Texas, and Oklahoma. At least eight people have died and twelve have been reported missing, according to news reports.

The two false-color satellite images above show the Arkansas River as it runs through Oklahoma and Arkansas. The top image was acquired on May 26, 2015, by the Moderate Resolution Imaging Spectroradiometer (MODIS) on NASA’s Aqua satellite. For comparison, the lower image shows the same area under more typical conditions as observed by MODIS on the Terra satellite on May 14, 2013.

The Arkansas River is the second-longest tributary of the Mississippi River, flowing from Colorado down through Kansas, Oklahoma, and Arkansas. On May 26, the river reached 33.39 feet (10.18 meters) at the Van Buren gauge near Fort Smith. Flood stage at that area is 22 feet; above 31 feet is considered a major flood. Waters appeared to crest in the evening on May 26 and began to subside, but more rain was predicted for the watershed in the final days of May.

The U.S. Army Corps of Engineers has closed four of Arkansas’ five navigable rivers to commercial and recreation traffic due to the flooding. Federal and state authorities in the region have been trying to manage the outflow from lakes and reservoirs, as well as river flow. Gauges monitored by the NOAA Advanced Hydrological Prediction Service also reported major flooding on the Red River (Texas-Oklahoma border) and on the Washita River in Oklahoma. Flood watches and warnings were in effect in much of the three states.

Rain and flood conditions have been as bad or worse in much of Oklahoma and Texas, but persistent cloud cover has prevented a clear satellite view since early May. Meteorologists are beginning to see connections between the rain in southern North America and the developing El Niño in the eastern Pacific.

“I do think there is a connection,” said Bill Patzert, a climatologist at NASA’s Jet Propulsion Laboratory. “Thesubtropical jet stream has shifted north and is feeding the Texas and Mexico flooding. The expanding warm waters in the eastern tropical Pacific appear to have energized the hydrologic cycle across the southern United States. What we know for sure is that this was an extreme, punishing deluge, even for flood-prone Texas, and emergency preparedness agencies should remain on high alert.”