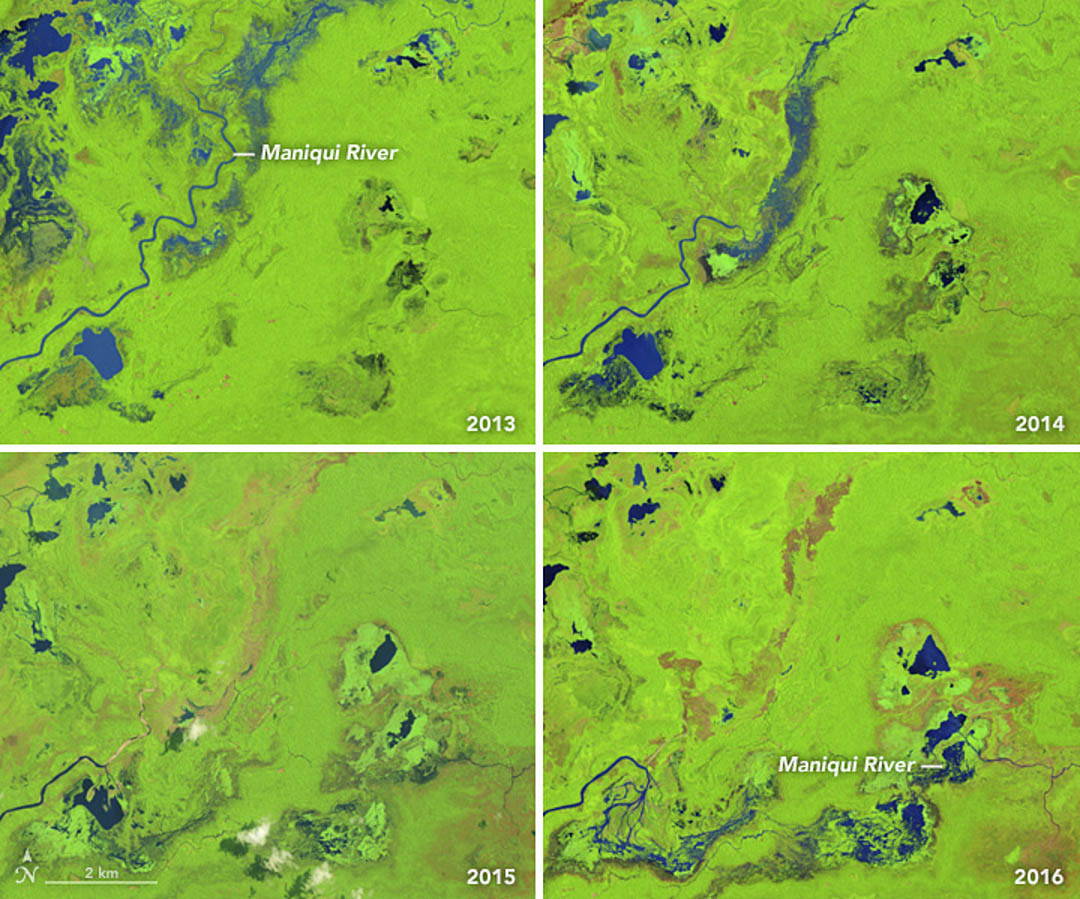 Previous research in the Amazon has pointed to the major flooding associated with La Niña, a cyclical cooling of ocean temperatures in the equatorial Pacific, as the cause of major shifts in the paths of rivers. However, groundbreaking new research on the Maniqui River has scientists now doubting this connection.

By using infrared light, it was easier to tell the difference between bare land and silt-laden water along the Maniqui River. This is because water absorbs infrared light, while the bare earth and plants reflect it. In the images, water appears as blue, bare land is light brown, forests are bright green, and savanna is pink-brown. The ability to distinguish between these landscapes was imperative, as Lombardo’s research was taking place in the Moxos plains of northern Bolivia. The topography of this area includes several rivers that flow through a swampy landscape of savanna, forests, and ponds.

In studying the satellite images of this area, Lombardo noticed a striking example of rapid change occurring along a stretch of the Maniqui River. The image on the upper left shows the river in September 2013, flowing in a northeasterly direction. The upper right is from August of 2014, which shows the river has broken through its right bank and begun to fill a swampy depression nearby. By September of 2015, the bottom left image, the river had broken out of its channel a second time. It was now beginning to fill a pond located a few kilometers south of the first break. The last image shows that by July of 2016, sediment deposited by the river had filled most of the pond. The river was beginning to chart a more easterly path, while vegetation had begun to fill the original river channel from 2013.

By analyzing these images, Lombardo determined that the course of small rivers tends to be in a regular state of change, regardless of La Niña cycles. He stressed the importance of these satellite pictures, saying “Images like this underscore how much and how quickly small – and medium-sized rivers in this part of the world change.”

These findings can help prepare authorities for the possibility that indigenous communities living along small rivers may be at risk if the rivers continue to shift. Knowing that change can happen so quickly and unpredictably is important progress for understanding the Amazonian ecosystem.