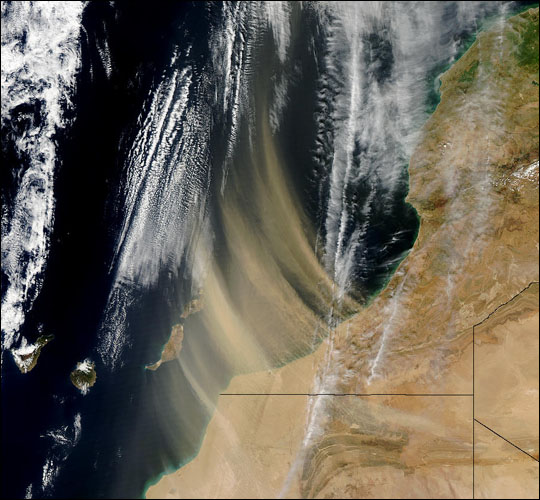 Saharan Dust off Morocco. A number of thick plumes of Saharan Desert dust (light brown pixels) were blowing from Morocco toward the northwest over the Canary Islands off Africa.s northwest coast. This true-color image was acquired by the Moderate Resolution Imaging Spectroradiometer (MODIS) aboard NASA´s Aqua satellite on March 12, 2003.

Since the foundation of the first Moroccan state by Idris I in 788 AD, the country has been ruled by a series of independent dynasties, reaching its zenith under Almoravid and Almohad rule, when it spanned parts of Iberia and northwestern Africa. The Marinid and Saadi dynasties resisted foreign domination into the 17th century, allowing Morocco to remain the only northwest African country to avoid Ottoman occupation. The Alaouite dynasty, which rules to this day, seized power in 1631. The country’s strategic location near the mouth of the Mediterranean attracted Europeans interest, and in 1912, Morocco was divided into French and Spanish protectorates, with an international zone in Tangier. It regained its independence in 1956, and has since remained comparatively stable and prosperous by regional standards, with the fifth largest economy in Africa. Also Saharan Dust off Morocco is a very well known thing to happen in the area.