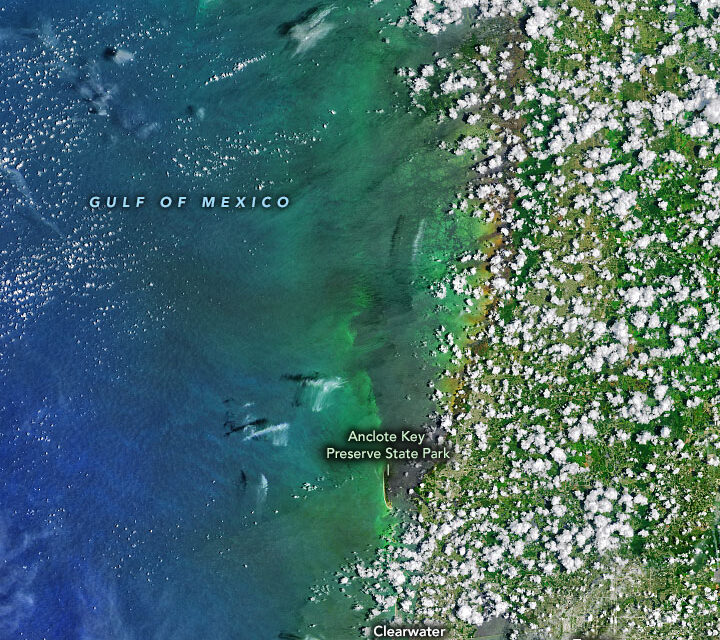 For the last several months, communities along the west coast of Florida have observed substantial blooms of the harmful algae Karenia brevis, according to NASA.

The worst outbreak has been observed near Tampa Bay, where fish are dying in what is often referred to as a “red tide” event.

“This Karenia brevis ‘red tide’ bloom is doubly unusual,” said Richard Stumpf, an oceanographer for the National Oceanic and Atmospheric Administration (NOAA). “It is summer, which is rare, and it is intense well into Tampa Bay, which is rare even during a ‘normal’ fall bloom.”

Karenia brevis is a microscopic algae that produces neurotoxins which can kill fish and cause respiratory problems for humans.

“Although Karenia brevis blooms are common to the West Florida Shelf and have been observed in almost every coastal region of the Gulf of Mexico, I have never seen anything like that inside Tampa Bay,” said Inia Soto Ramos, an ocean color specialist at NASA’s Goddard Space Flight Center (GSFC).

“Massive blooms were observed back in the late 1990s, and even the Spanish conquistadors described them in their books. But the bloom this year inside the bay is worrisome. It could be a one-year thing, and hopefully it is. But if water quality in the bay continues to decline, residents should prepare for more blooms, and not only K. brevis.”