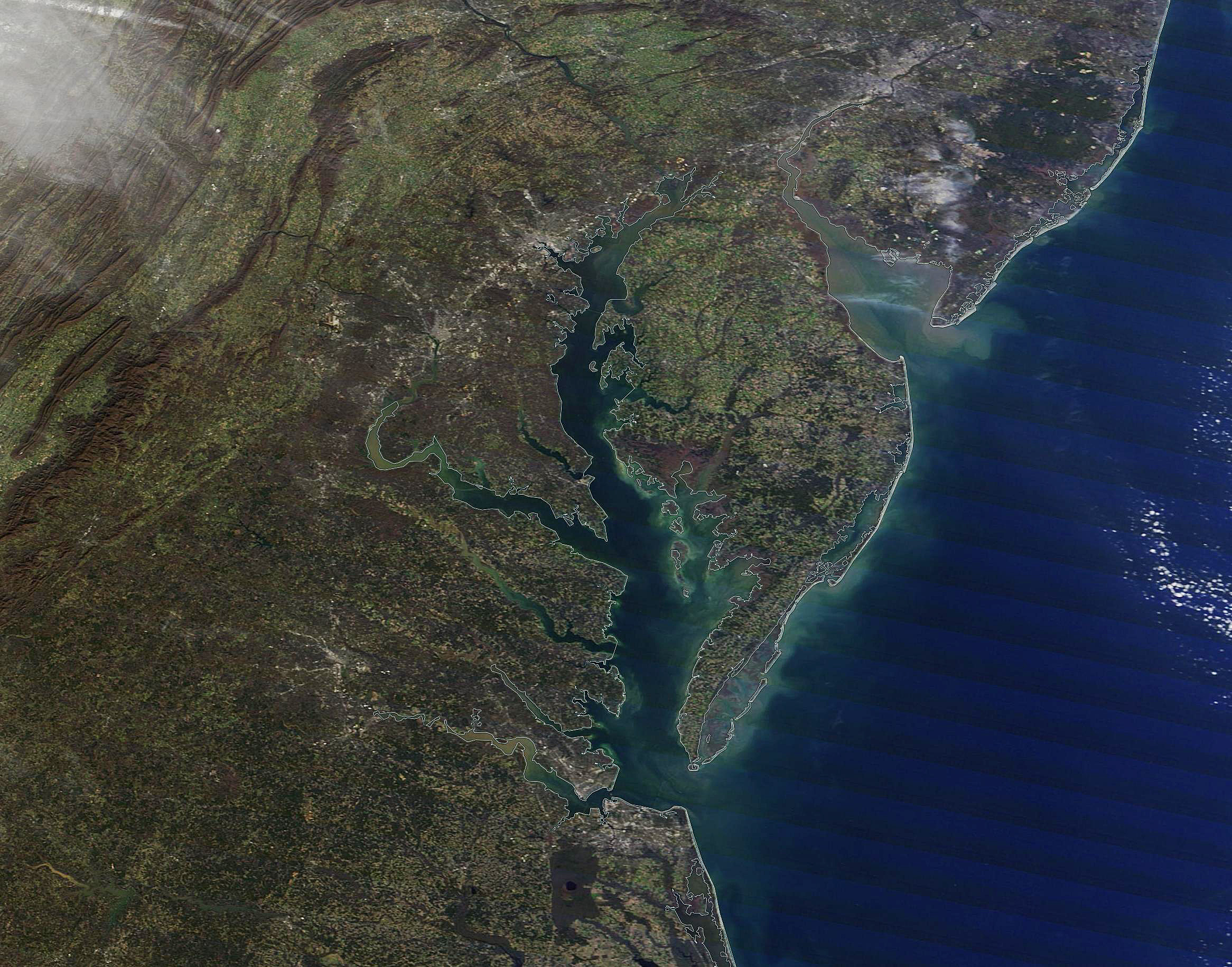 The Chesapeake Bay is the largest estuary in North America and the third largest in the world, with a watershed of roughly 64,000 square miles (166,000 square kilometers). Fifty major tributaries flow into the Bay with about 10,000 additional smaller streams and creeks adding to the waters that lap the 12,000 mi (19,000 km) of shoreline.

Beginning where the Susquehanna River ends at Havre de Grace Maryland, the Chesapeake Bay stretches southward about 200 miles (322 km) to Norfolk, Virginia where it ends in the waters of the Atlantic Ocean. Although it holds 15 trillion gallons of water, the Bay is shallow. The average depth is just 21 feet (6.4 meters) – but that number doesn’t tell the whole story. More than 700,000 acres of the bay are less than 6 feet (1.8 meters) deep, while a few large channels cut more than 100 feet (30.5 meters) deep and are suitable for deep water shipping.

Estuaries – places where freshwater rivers meet the saline ocean – are valuable areas for human communities as well as natural ecosystems. The Chesapeake Bay provides food, recreation, work and other resources for 10 million people who live on or near its shores, and is impacted by almost 18 million people who live in the watershed. The Bay supports more than 3,600 species of plants and animals, including 348 species of finfish and 173 species of shellfish. About 500 million pounds of seafood are harvested from this bountiful and beautiful Bay each year.

The Moderate Resolution Imaging Spectroradiometer (MODIS) aboard NASA’s Terra satellite captured this true-color image of the Chesapeake Bay on December 20, 2015.

In this image, the blue waters of the long Chesapeake Bay appear relatively free of sediment, especially when compared to the smaller Delaware Bay, found to the northeast. The largest of the major tributaries can easily be seen in this image. On the Western Shore they are, from north to south: the Patapsco River, the Patuxent River, the Potomac River, the Rappahannock River, the York River and the James River. Sediment fills the upper section of the Potomac River as it flows south of Washington, DC. On the Eastern Shore the major tributary is the Choptank River, which joins the Bay just south of the place where the sediment in the Upper Bay begins to clear.

To the west of the Bay the gray pixels represent areas of human development. The cities of Washington, DC, Baltimore, Maryland and Philadelphia, Pennsylvania are roughly circular areas that lie, from south to north, along the thinner gray line of the I-95 corridor.