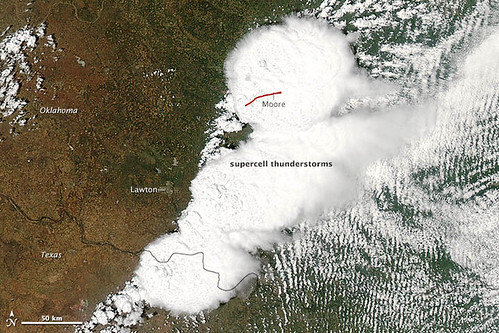 The red line on the image depicts the tornado’s track. It touched down west of Newcastle at 2:56 p.m. and moved northeast toward Moore, where it caused dozens of deaths, hundreds of injuries, and widespread destruction to property and public buildings. The tornado had dissipated by 3:36 p.m., after traveling approximately 17 to 20 miles (27 to 32 kilometers).

According to National Weather Service and media reports, the mile-wide tornado had a preliminary damage rating of EF-4, with winds reaching 190 miles per hour. It had a relatively slow forward speed for such a violent storm—about 20–25 miles per hour—likely exacerbating the damage. Debris from the tornado fell as far as 100 miles (160 kilometers) away, reaching the city of Tulsa.

Below is time-lapse video of the storm system as viewed by the National Oceanic and Atmospheric Administration’s GOES-East satellite. Images were acquired every 15 minutes from 10:45 a.m. through 6:45 p.m. Central Daylight Time on May 20. You can also click here to download a quicktime version of the video. Jeff Masters of Weather Underground has also posted several ground-based videos here. And meteorologists in NASA’s Short-term Prediction Research and Transition Center posted several experimental views of the storm-damaged area at night. Tornado and Severe Thunderstorms Strike Oklahoma.