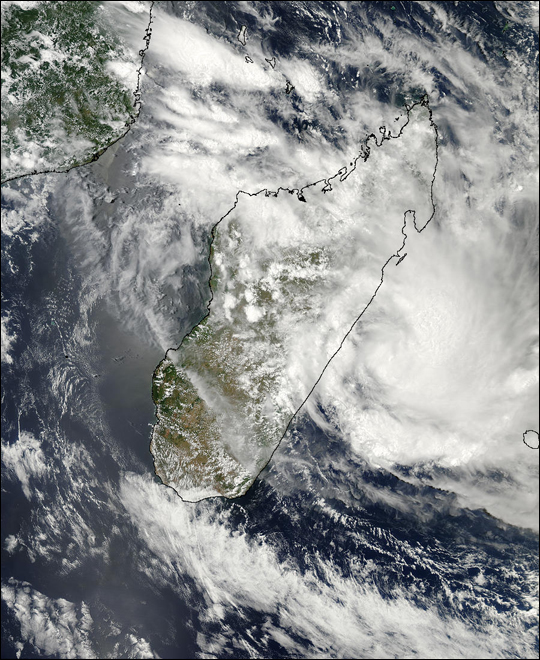 Tropical Cyclone Fari, located approximately 200 miles east of Antananarivo, Madagascar, is moving to the southwest at 12 mph. Packing maximum sustained winds of 46 mph with gusts to 58 mph, Fari is expected to briefly intensify and then quickly weaken as its center moves closer to land.

Visit the MODIS Rapid Response Team for a copy of this scene at MODIS’ full resolution of 250 meters per pixel.

Cyclone Favio was the first known tropical cyclone that passed south of Madagascar to strike Africa as an intense tropical cyclone. Early on February 11, 2007, a zone of disturbed weather formed east of Madagascar. Four days later, Favio was named as intensified to a moderate tropical storm while moving southwest. On February 18, the storm was upgraded into a severe tropical storm. Then, it turned west in the general direction of Mozambique. Continuing to intensify, Favio was upgraded to a tropical cyclone early on February 19. Subsequently, the storm began to undergo rapid deepening; the small storm reached intense tropical cyclone status the next day before peaking in intensity. However, the cyclone had weakened somewhat prior to making landfall on February 22 in the Inhambane Province in Mozambique. It rapidly weakened over land and dissipated the next day.