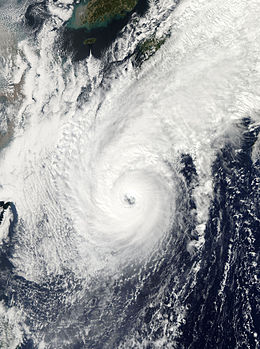 The MODIS instrument aboard NASA’s Aqua satellite captured this true-color image of Typhoon Chaba on August 28 at 4:15 UTC. At the time this image was taken, Chaba was located approximately 685 km (426 miles) southeast of Sasebo, Japan and was moving towards the northwest at 6 km/hr (3 mph). Maximum sustained winds were near 213 km/hr (132 mph) with higher gusts to 259 km/hr (161 mph)

Typhoon Chaba was the strongest tropical cyclone in the western Pacific during 2004 and caused a swath of damage from the Mariana Islands to Japan from August through September of that year. Chaba was the Japan’s second costliest storm during the season, only behind Songda in September, and peaked as a typhoon with maximum sustained winds equivalent to that of a Category 5 on the Saffir–Simpson hurricane wind scale.

Chaba originated from a gradually developing area of disturbed weather on August 18, northeast of Kwajalein. Tracking westward, the system gained tropical storm strength the following day and then reached typhoon intensity on August 20. Rapid intensification ensued thereafter, with Chaba quickly attaining its peak intensity on August 23 as it began to curve towards the northeast. This intensity was maintained for several hours before the typhoon began to fluctuate in strength as it began to meander south of Japan beginning on August 26. Three days later, Chaba made landfall on Kyushu, later tracking across the Sea of Japan as it concurrently weakened. On August 31, the storm transitioned into an extratropical cyclone, and later dissipated in the Sea of Okhotsk on September 5.