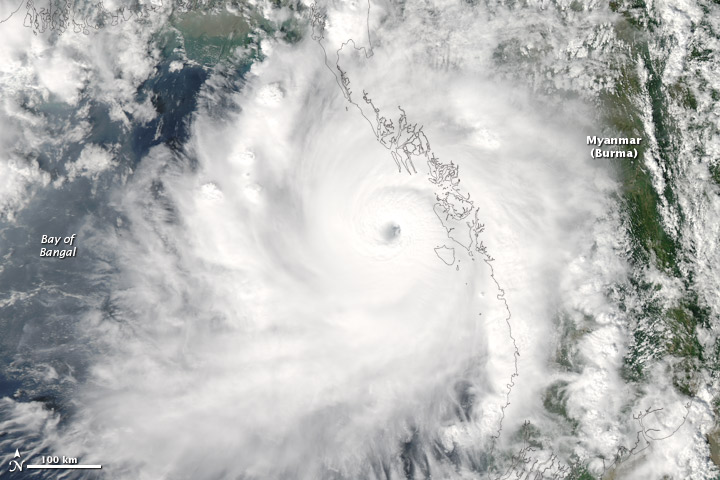 Within a day of forming over the north Indian Ocean, Cyclone Giri intensified into a powerful Category 5 cyclone. This image, taken by the Moderate Resolution Imaging Spectroradiometer (MODIS) on NASA’s Aqua satellite, shows the storm moving ashore over Myanmar (Burma) at 1:25 p.m. local time (6:55 UTC) on October 22, 2010.

The image shows a compact, mature storm with a well-defined eye and a circular shape. (Winds that break cyclones apart also distort the circular shape.) At the time, Giri had winds estimated at 125 knots (230 kilometers per hour or 140 miles per hour), a Category 4 storm. The storm was stengthening explosively, said the Joint Typhoon Warning Center. Just 6 hours earlier, Giri’s winds had been at 85 knots (160 km/hr or 100 mph). Five hours after the image was acquired, winds reached 135 knots (250 km/hr or 155 mph), making Giri the equivalent of a Category 5 hurricane.

The last large cyclone to strike Myanmar, Cyclone Nargis, had winds of 115 knots (210 km/hr or 130 mph) at its strongest. Nargis hit the low-lying and populated Irrawaddy Delta on May 3, 2008, causing extensive flooding that left more than 100,000 dead. Though stronger than Nargis, Giri was moving toward a less populated and less vulnerable region. The government had issued warnings ahead of the storm, reported CNN.