In the absence of wolves, coyotes have adapted to changing landscapes • 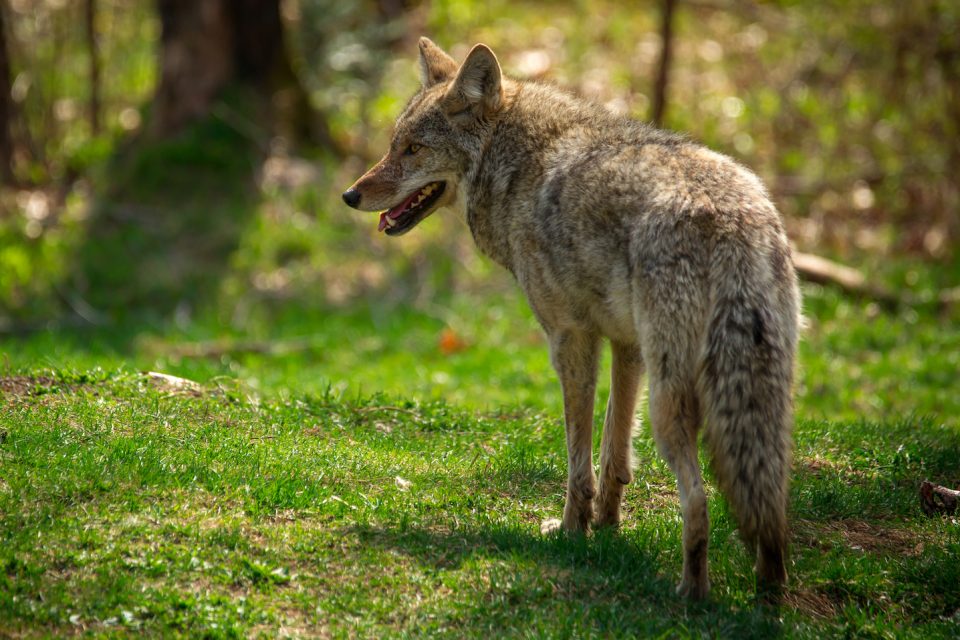 In the absence of wolves, coyotes have adapted to changing landscapes

In the absence of wolves, coyotes have adapted to changing landscapes. Once while hiking in the Catskills of New York, my partner Erin and I were lucky to stumble upon a few coyotes. The canines sprinted away quickly in a flurry of dried leaves that covered the forest floor on that autumn day. Even in that brief moment, I noticed the coyotes were a bit different from the coyotes I knew from the western states where I’ve spent most of my life.

Eastern coyotes are longer in leg than the relatively stocky coyotes you’ll find in Colorado, Utah, Wyoming or South Dakota.  The differences between eastern coyotes and western coyotes bring to mind several questions – is there hybridization with wolves? What causes the difference? And finally, what ecological role does each population of coyotes play?

As we reported back in March of this year, research has shown that although coyotes do sometimes eat deer, they don’t significantly control their population, at least in the eastern US. This is a problem because the eastern states are somewhat overrun with white-tailed deer (Odocoileus virginianus) populations.

Vassar Farms and Ecological Preserve, a research facility connected to Vassar University, hired a private company in 2010 to kill deer in an attempt to control deer overpopulation. Since 2013, Vassar has been working with the US Department of Agriculture Wildlife Services to cull their deer population. The New York Times reports that on Staten Island, New York City’s Department of Parks and Recreation has been working with veterinarians to control deer populations by performing vasectomies.

Some critics feel the procedure will be useless as deer that aren’t pregnant will only go into heat again and a single male deer can impregnate many females. It’s still in the first few years of the deer vasectomy trial, so it’s hard to say how much affect the procedures are having. But the real question is why is so much effort in deer population control needed at all? And why is deer population control more necessary in the eastern US than in the west? The answer is related to ecology but it’s also wrapped up in human history.In the absence of wolves, coyotes have adapted to changing landscapes

When Europeans first arrived on the eastern coast of what came to be known as North America, wolves were distributed throughout what would become the United States (minus Hawaii), including the eastern half. Due to their arrival on the eastern side of the continent, European persecution of wolves hit the canids hardest in the eastern states, with small remnant populations remaining in the midwest and importantly, Alaska. By 1960, only about 300 wolves remained in the lower 48 states, hiding in dense forests of Michigan and Minnesota, according to Grey Wolf Conservation.

Much of the wolf habitat in the eastern US was developed, slicing up potential habitat into smaller pieces. Small reintroduction programs in several states where more land is available have had a rocky start, often coming into conflict with ranchers in those areas. Reintroduction and survival of the wolf in the contiguous United States is an ongoing if controversial effort. Meanwhile, the downfall of the wolf has only benefited their smaller cousin, the coyote.

The Urban Coyote Research Project reports that before 1700, coyotes were found only in the deserts and prairies of the central United States and Mexico. That population slowly began to spread outwards as wolves were killed off by settlers and hunters. With less competition from the larger wolves, coyotes flourished.  European Americans and the US government tried to control the coyote populations in the same way they curtailed the wolf populations – bullets, traps, poison. But coyotes are a trickier animal than wolves, especially when it comes to eradication. Often, killing coyotes results in the few remaining female coyotes going into heat more often, producing more young and in the end creating a population boom.

Coyotes have also been found living in urban environments, something impossible for wolves. I’ve seen coyotes unconcernedly strolling across streets and along city park sidewalks in the city of Tucson (interestingly Tucson coyotes are larger than many other western coyotes as well). Coyotes have become common in west coast cities and now live near population centers outside of their historic range, such as New York City.

The success of coyotes isn’t confined only to North America either. Earth.com reported that coyotes have crossed the Panama Canal and have been seen approaching the Darien Gap, a dense piece of roadless jungle on the border of Panama and Columbia. Given the differing fate of wolves and coyotes when subjected to the pressures of human development, habitat destruction, and hunting, the question becomes how the change in populations is likely to affect the ecology of North America?

There is some evidence that coyotes fill some of the ecological roles of wolves.  Earth.com reports that coyotes are only 10 to 15 pounds lighter on average than wolves, but that this difference in weight is enough that the smaller canids rarely hunt moose the way wolves do. Coyotes instead prey on deer, rabbits and smaller game. Later, it was found that despite preying on deer, for some reason coyotes in eastern states aren’t effectively controlling deer populations for the most part. There is still some evidence that in parts of the eastern US, deer populations are declining, pointing to the unpredictability of coyotes as deer hunters. Researchers suspect that as coyote populations continue to grow, they may more effectively deer populations. This all points to the flexibility and adaptiveness of the coyote, which asks another question – are they still coyotes?

As I mentioned before, eastern coyotes look differently than their stockier western cousins. Coyotes in the eastern states actually look a lot more like the mostly eradicated wolves. As Earth.com reported, some have taken to call them “coy-wolves” instead of coyotes at all. This is because genetically, the eastern coyote isn’t exactly a coyote. Genetic research has found that the eastern coy-wolves are actually hybrids of coyotes, wolves and dogs. This goes a long way towards explaining the persistence of coyotes in the United States.

To adapt, it seems the coyote tapped into a bigger gene pool, allowing greater flexibility in its adaptation. Genetic diversity is the raw material of evolution. In the end, the story of the coyote is the story of humans.

Coyotes in North America reflect a reaction of wildness – ecosystems, evolution, a stubborn canine that won’t die off to our own disturbance of a mighty continent. It even shows reflections of our own interactions with the dogs we love and their ancestors, the wolves, that we hate. When you think of the history of destruction and colonization of America, also think of the persistence of the coyote and the coy-wolf.