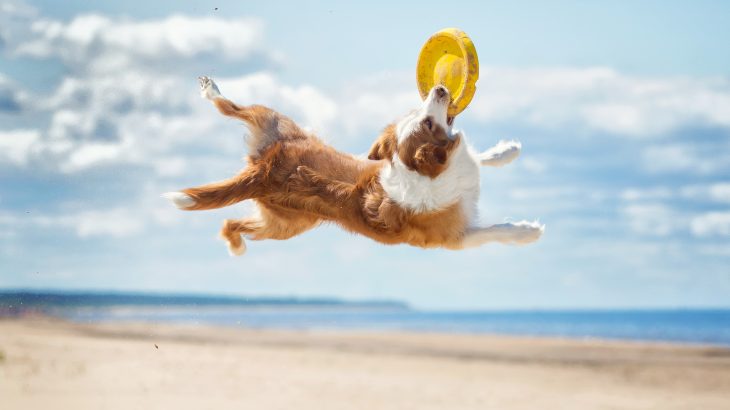 A new study from the University of Helsinki has demonstrated that active dogs are less afraid of the world. A behavioral survey of nearly 14,000 dogs revealed that non-social fears among dogs are related to their living environment, lifestyle, and breed.

Noise sensitivity, fear of new situations, and fear of heights are common behavioral issues for dogs. The new research has shown that active dogs who were well-trained as puppies are less likely to exhibit these types of fears.

“Physical exercise has been shown to have a positive effect on the mood in both dogs and humans,” said study co-author Emma Hakanen. “As social animals, dogs enjoy doing things with their owners. At the same time, people do not necessarily wish to subject fearful dogs to training situations that are stressful for them. This can also make owners less inclined to train with their dog.”

The survey responses indicated that puppies who were not sufficiently socialized and introduced to new environments were much more likely to be afraid of loud noises, unfamiliar situations, and various walking surfaces.

The fear of fireworks and walking surfaces was most prevalent among dogs who belonged to first-time owners, and there were differences between dogs who lived in the country and the city.

Study lead author Hannes Lohi is a professor of Veterinary Medicine at the University of Helsinki. The research is part of Professor Lohi’s Academy of Finland project, which investigates the environmental and genetic factors that influence canine behavior.

“Our prior research on the environmental effects of social fear observed the same phenomena where urban dogs were more fearful than their rural counterparts,” said Professor Logo.

“Indeed, it is interesting that human mental health problems too occur more frequently in the city than in rural areas. The ways in which our environment shapes us and our best friend is definitely an interesting topic for further research.”

The investigation confirmed the findings of previous studies that fearfulness is most common in sterilized females and small dogs. Fearfulness was found to vary substantially across different dog breeds. Cairn Terriers ranked among the most fearful breeds and Chinese Crested Dogs ranked among the least fearful.

“The breed-specific differences support the idea that fearfulness is inherited. In other words, breeding choices matter, even without knowing the exact mechanisms of inheritance,” said Professor Logo.

“However, this study offers dog owners tools and support for previous notions related to improving the wellbeing of their dogs. Diverse socialization in puppyhood and an active lifestyle can significantly reduce social and non-social fearfulness.”