Ancient dogs had a bite so strong that it could crush bones • Earth.com 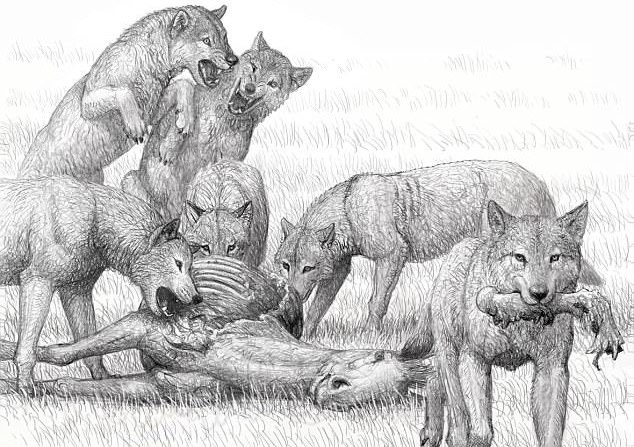 An analysis of fossilized feces from two million years ago is shedding new light on the hyena-like ancestors of dogs and wolves. The extinct species, Borophagus parvus, had a jawbone so powerful that it could crush the bones of its prey.

Scientists have previously theorized that Borophagus could pulverize bones due to the fact that the ancient dog has skull and jawbone features in common with the bone-crushing spotted hyena, which is still alive today.

“Their skeletal features – such as highly robust skulls and jaws, teeth to withstand high stress, and large muscle-attachment areas for a powerful bite – share many similarities with the spotted hyena,” wrote the study authors.

“It is therefore likely that these extinct North American dogs played a similar role in the ecosystem as living hyenas do now.”

The discovery of 14 fossilized feces samples, which are known as coprolites, recovered in a site at California’s Mehrten Formation has helped to confirm this theory.

The research team performed micro-CT scans on the feces and found bone fragments in all of the Borophagus remains.

“The broad range of bone fragment sizes discovered inside the coprolites suggests that these predators consumed small vertebrate prey as well as deer-sized mammals,” wrote the researchers.

Study co-author Jack Tseng is a functional anatomist at the University at Buffalo.

“Rarely do paleontologists get the chance to validate our skull-centric research using the other end,” Tseng told Live Science.

Study lead author Xiaoming Wang is a curator in the Department of Vertebrate Paleontology at the Natural History Museum in Los Angeles. He explained that Borophagus had a hunting style similar to that of modern hyenas, who are social hunters.

“While social hunting helps in overcoming large prey, once the prey is secured, the feeding itself is also highly competitive,” Wang told Live Science. “So competitive, in fact, that individual hyenas have no time to chew their meat, and they simply break down the prey in large enough chunks and quickly swallow bones and meat together, in order to grab the next bite of food.”

The study also revealed that Borophagus did not digest bones as efficiently as spotted hyenas. The findings indicate that the ancient wild dogs swallowed the bones like spotted hyenas, but digested them like striped or brown hyenas.