Ants keep the colony strong by working together • Earth.com 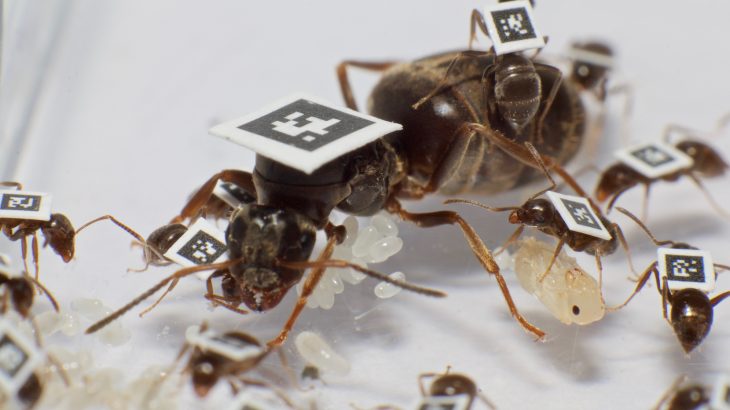 Ants keep the colony strong by working together

New findings from a collaborative study between the Sylvia Cremer group at the Institute of Science and Technology Austria (IST Austria) and the Laurent Keller group at the University of Lausanne show that ants change their behavior when a pathogen enters their colony. By adapting their social organization, the ants work together to protect the queen, brood, and young workers from becoming sick.

Published in the journal Science, the research reveals that, within each colony, ants are organized into subgroups based on their age and tasks. For example, younger worker ants, called “nurses,” protect the brood at the center of the colony, older ants, called “foragers,” leave the colony to collect food. These subgroups are vital if and when a pathogen enters the colony.

To track the ants’ behavior when disease presents itself within the colony, the research team used the Keller group’s “barcode” system, for which digital markers are placed on ants and infrared cameras are used to monitor their actions within the colony. The team placed markers on 2,266 garden ants and then exposed 10% of the worker ants to fungal spores.

“The ants change how they interact and who they interact with,” Sylvia Cremer said regarding the ants’ social behaviors after detecting the fungal spores. “The cliques among ants become even stronger, and contact between cliques is reduced. Foragers interact more with foragers, and nurses more with nurses. This is a response by the whole colony — also animals who are not themselves treated with spores change their behavior.”

Laurent Keller added, “This is the first scientific study that shows that an animal society is able to actively change its organization to reduce the spread of disease.”

Furthermore, researchers noted that, once a pathogen is introduced into the colony, the ants regroup to protect the most valuable colony members, like the queen, nurses, and workers. These important colony members received less of the pathogen, meaning they were kept separate from those infected. And in survival experiments, ants with a high predicted spore load almost always died after nine days, whereas nurses rarely died and all the queens survived, showing that protecting the important players is key in ant society.

“Social interactions are the routes on which diseases travel and define how epidemics may spread,” Cremer said. She concluded, “Basic research on ants can help us to deeper understand epidemiological processes, which can be relevant also in other social groups.”