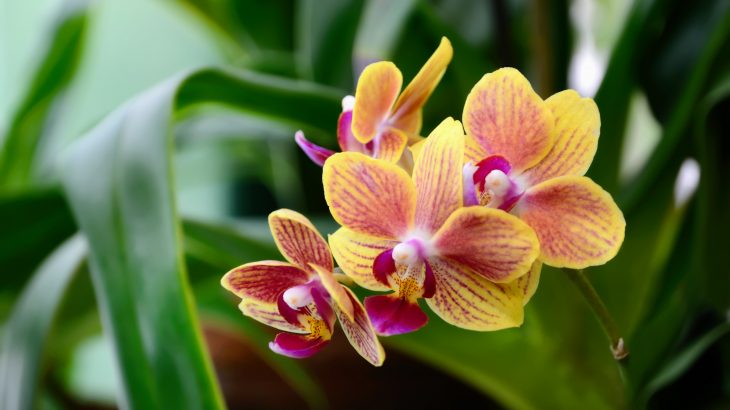 A new study from the Smithsonian Tropical Research Institute (STRI) reveals that the asteroid impact that killed off the dinosaurs also wiped out almost half of the plants in modern day Colombia. According to the researchers, this series of events paved the way for flowering plants to become dominant in tropical rainforests.

“We wondered how tropical rainforests changed after a drastic ecological perturbation such as the Chicxulub impact, so we looked for tropical plant fossils,” said study first author Mónica Carvalho. “Our team examined over 50,000 fossil pollen records and more than 6,000 leaf fossils from before and after the impact.”

A team of experts led by STRI paleontologist Carlos Jaramillo studied pollen grains from 39 sites across Colombia, including rock outcrops and cores drilled for oil exploration. The goal of the research was to examine the regional composition of forests before and after the asteroid impact 66 million years ago.

Evidence obtained from rocks older than the impact showed that rainforests were equally dominated by ferns and flowering plants. Conifers, such as relatives of the Kauri pine and Norfolk Island pine, were abundant at that time.

After the impact, conifers disappeared almost completely from this region of the tropics and flowering plants took over. The experts report that plant diversity did not recover for around 10 million years after the asteroid collision.

The researchers determined that pre-impact tropical forest trees were spaced far apart, allowing light to reach the forest floor. Within 10 million years after the impact, some tropical forests had grown thick. Trees and vines blocked out most of the light from reaching the  smaller trees, bushes, and herbaceous plants below.

There was no evidence of legume trees before the extinction event, but diverse and abundant legume leaves and pods emerged after the event. Today, legumes are a dominant family in tropical rainforests that have a big influence on nitrogen cycling.

Carvalho also collaborated with Conrad Labandeira at the Smithsonian’s National Museum of Natural History to investigate insect damage on the leaf fossils.

“Insect damage on plants can reveal in the microcosm of a single leaf or the expanse of a plant community, the base of the trophic structure in a tropical forest,” said Labandeira.

“The energy residing in the mass of plant tissues that is transmitted up the food chain – ultimately to the boas, eagles and jaguars – starts with the insects that skeletonize, chew, pierce and suck, mine, gall and bore through plant tissues. The evidence for this consumer food chain begins with all the diverse, intensive and fascinating ways that insects consume plants.”

Based on evidence from both pollen and leaves, the team proposes three possible explanations for the transformation of tropical forests from conifers to flowering plants: dinosaurs kept pre-impact forests open by feeding and moving through the landscape; falling ash from the impact enriched soils throughout the tropics, giving an advantage to the faster-growing flowering plants; or the extinction of conifer species created an opportunity for flowering plants to take over the tropics.

“Our study follows a simple question: How do tropical rainforests evolve?” said Carvalho. “The lesson learned here is that under rapid disturbances – geologically speaking – tropical ecosystems do not just bounce back; they are replaced, and the process takes a really long time.”