Bat-inspired drones could be used to monitor weather or pollinate crops • Earth.com 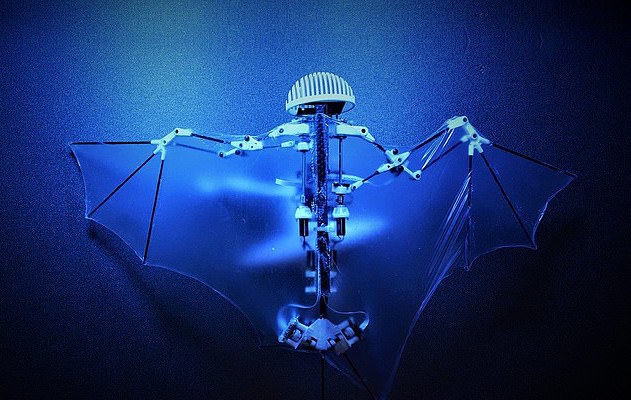 Scientists are creating a new generation of ultralight drones that are inspired by the aerodynamics of birds and insects. The tiny drones may be ultimately be used to monitor traffic, collect weather data, or even to pollinate crops.

Alireza Ramezani is an assistant professor of Electrical and Computer Engineering at Northeastern University who is designing a drone that mimics the flight ability of bats. According to Professor Ramezani, bats “have arguably the most sophisticated flight mechanisms of any animal.”

The autonomous drone developed by Professor Ramezani and his team, known as Bat Bot, weighs just over three ounces with wings that can flap or glide. It can also make sharp turns and dives, and will be capable of accessing tight spaces that larger drones cannot access.

Professor Ramezani explained that this type of drone will be particularly useful for surveillance, whether inside of buildings or outside hovering over streets.

“There will be these machines that are round the clock doing monitoring and providing information,” Professor Ramezani told NBC. “We can think of them as the guardians of future cities.”

He pointed out that conventional drones like quadcopters are “made out of hard materials, rigid structures, fast-rotating blades and propellers, which are not really safe to operate in proximity of human beings.”

On the other hand, the Bat Bot has a carbon fiber skeleton covered with a soft, super-stretchable membrane that would not be harmful if it collided with people or other objects. The bio-inspired drone is also much less intrusive.

Next, the Northeastern team will construct an advanced version of the Bat Bot that can perch and hang upside down just like the animal itself. Cameras and sensors will be added to collect various types of data.

“If robotic systems can hang from structures, they can harvest solar energy and once they’re fully charged they can fly around again,” said Professor Ramezani. “It sounds futuristic, but we’ll see how we can accomplish this.”