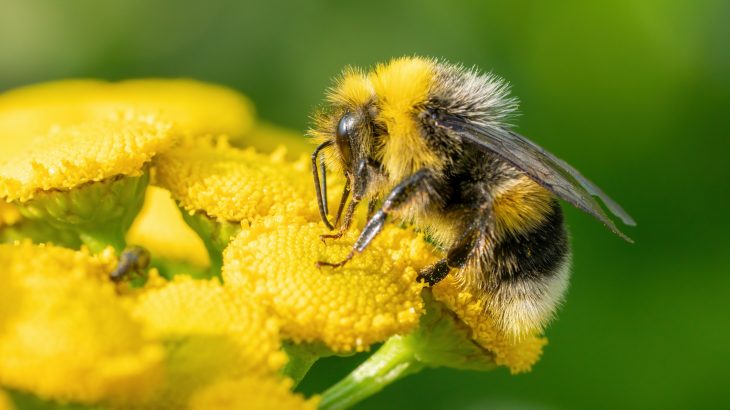 Bees pollinate flowers with incredible force, buzzing with much more intensity than they use to fly or to defend themselves, according to a new study from the University of Stirling.

The researchers found that flower buzzing produces forces of more than 50 G, which is five times the force of a fighter jet.

“We know that bees use their distinctive buzzing vibrations for lots of different tasks and, for this study, we wanted to understand whether buzzes differed by task – or if variations in buzzing were caused by drag on the wings,” said Dr. Pritchard.

“Buzz-pollinated flowers represent some of our most important economic crops – such as potatoes, tomatoes, aubergines and blueberries – and understanding how bees buzz these flowers also provides an important insight into how these flowers coevolved with bees. This is important because it helps us better understand what these flowers need in order to be pollinated.”

Previous studies have revealed variations between flight buzzing and defensive buzzing. The wings flap during flight, but not while bees defend themselves. This made it difficult to determine whether the buzzing variations were caused by flapping wings.

To investigate, Dr Pritchard and his colleague Dr Mario Vallejo-Marin turned their attention to flower buzzing, which occurs when bees vibrate flowers to shake pollen onto their bodies.

The experts used a laser to measure the speed of movement 10,000 times per second as bees vibrated during defensive moves, flight, and pollination, and then analyzed the data using a computer.

“We wanted to understand whether defensive buzzing and flower buzzing were similar – and if buzzing variation could be attributed to wing flapping or if bees adapt depending on the task in hand,” said Dr. Pritchard.

“We found that flower buzzes were much more powerful than buzzes used for defense or for flight – suggesting that, rather than being due to drag on the wings, bees might have evolved different types of buzzes for different tasks.”

According to the researchers, it is important to understand the various techniques used for pollination.

“For example, we still do not understand why honeybees do not buzz flowers. By better understanding how flower buzzes appear and differ from the other vibrations bees produce, it may shed light on the reasons why some bees buzz flowers and some do not.”