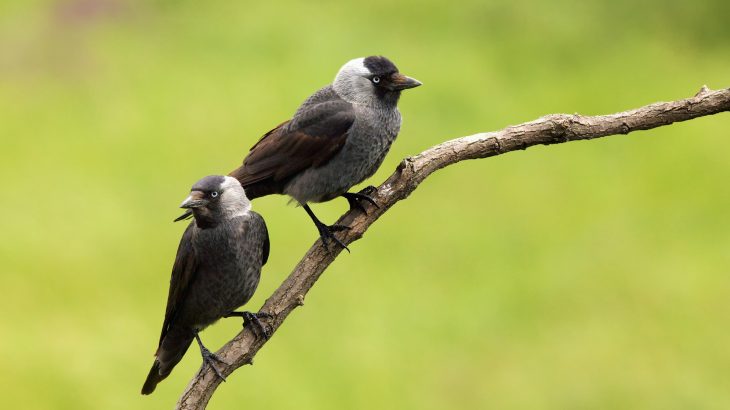 Birds are more alarmed by moving sticks than moving snakes

A team of scientists led by the University of Exeter has found that, like humans, birds are startled when inanimate objects suddenly move. While testing how jackdaws responded to moving birds, snakes, and moving sticks, the researchers found that the birds were most alarmed by the moving sticks.

Dr. Alison Greggor, formerly of the University of Cambridge and now at the San Diego Zoo Institute for Conservation Research, is the study’s lead author.

“Although as humans we see the divide between animate and inanimate objects as an intuitive one, we’ve had very little evidence that wild animals also see the world this way,” explained Dr. Greggor.

“Laboratory studies have shown that human infants and a few other species discriminate between animate and inanimate objects. This ability is assumed to have evolved to support social interactions, but its role for wild animals has never been examined.”

“Our work extends the potential function of this ability beyond the social realm. It might therefore be a more common ability than previously thought.”

For the investigation, the researchers placed remote-controlled objects in the nests of jackdaws. This allowed the experts to observe how the birds perceived potential threats to their offspring.

The jackdaws were startled by any movement in the nests and produced alarm calls. The longest delays in returning to the nest, however, were noted after the birds saw the remote controlled stick move.

This behavior indicates that jackdaws recognized the movement as being unusual and unexpected. The birds likely delayed re-entering the nest in order to gather more information out of caution.

Dr Alex Thornton, of the Centre for Ecology and Conservation added: “There is still a great deal we do not understand about some of our common bird species. Dedicated field experiments, such as ours, can yield insights into their minds, revealing more about how they understand the world.”