These birds have a Plan B if they can’t keep their eggs in one basket • Earth.com 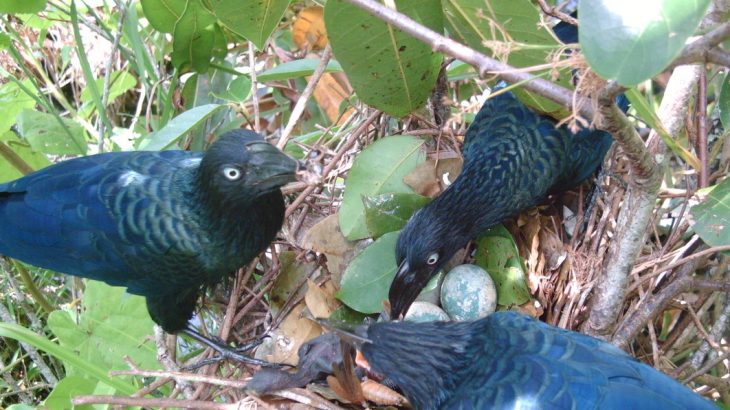 Researchers at Princeton University have found a species of cuckoo in the tropical jungle of Central America that has developed an interesting strategy for reproductive success. The birds start off the breeding season by building communal nests which are guarded by two or three breeding pairs. If the communal nest is destroyed by a predator, however, the birds spread out their eggs in different nests.

Study co-author Christina Riehl is an assistant professor of Ecology and Evolutionary Biology.

“When different females in a population pursue different reproductive tactics, like cooperative and parasitic nesting, this poses an evolutionary puzzle,” said Professor Riehl. “We wondered why some females lay their eggs into other groups’ nests, whereas other females never do.”

“We found the parasitic strategy is more of a second-line option. It’s as if the birds say, ‘If our cooperative attempt fails, let’s go to Option B.’”

The greater ani is one of just a few bird species in which unrelated females raise their young together. By contrast, social parasitism is a very common strategy used by over 250 bird species.

To find out what makes the birds resort to parasitism, the scientists observed the anis and their nesting behaviors for more than a decade at Barro Colorado Nature Monument in Panama.

The researchers discovered that nearly all the birds started the breeding season in communal groups due to constant threats from predators such as snakes and monkeys. Social parasitism was also found to be widespread, with about 25 percent of the nests being parasitized by a female who was not a member of the group.

The team noted that females whose nests were destroyed by predators early in the nesting cycle were most likely to lay parasitically, and usually built an alternative nest close to the failed nest. The experts also determined that both of the reproductive strategies are viable options for the birds.

Mark Hauber is an ornithologist and behavioral ecologist of the University of Illinois at Urbana-Champaign who was not involved in the study.