How do birds use the Earth’s magnetic field to navigate their migration paths? • Earth.com 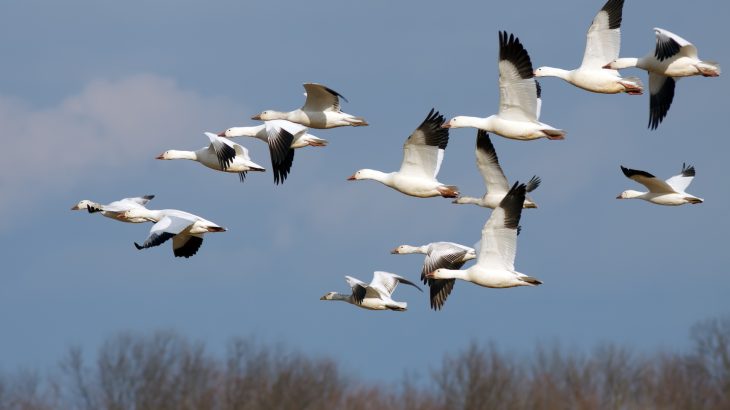 How do birds use the Earth’s magnetic field to navigate their migration paths?

Animals that can sense the Earth’s magnetic field are provided with important navigational information, such as a sense of direction that is associated with the field. Using this compass, along with other parameters such as the intensity of the magnetic field, birds can successfully navigate over long distances.

It remains a mystery, however, what the birds actually use to sense the conditions of the magnetic field. It is known that birds have tiny magnets that contribute to their navigational ability, yet the precise underlying mechanism is unknown.

Beyond their ability to detect the energy of magnetic fields, birds have proteins in their eyes that allow them to visualize magnetic fields. The proteins single out strains of magnetism within the surroundings, and convert them into a visible compass.

Researchers from the Goethe-Institut in Germany are investigating how the data obtained by the bird’s beak and eyes is combined to create a navigational map.

Even though the pieces of magnetic iron are so small that they have not been located, scientists believe that these particles play a major role in avian navigation.

“Presently, the specific location of the magnetite-based magnetoreceptors is still unclear,” wrote study authors Roswitha and Wolfgang Wiltschko. “The observation that magnetic stimuli had been found to be transmitted by the ophthalmic nerve suggests that the receptors lie in the area innervated by this nerve, and here the region of the upper beak, where superparamagnetic magnetite had been described, seemed a likely candidate.”

The researchers explained that the regions of the brain where magnetic directional information is processed are also not entirely clear.

“Most probable candidates are areas associated with the visual system, yet it is still open whether the processing of magnetic information is an integrated part of vision or whether it is processed more or less independently as a sense of its own.”

“One might consider the hippocampus as a most likely candidate for integrating all these types of information – however, displacement experiments with hippocampal-ablated pigeons showed that these birds departed homeward oriented like the control birds, i.e. navigation from greater distances, could still take place,” wrote the study authors.

The team said that further research will hopefully lead to a more complete picture of where magnetic information is processed in the brain and combined with other information for navigational processes.