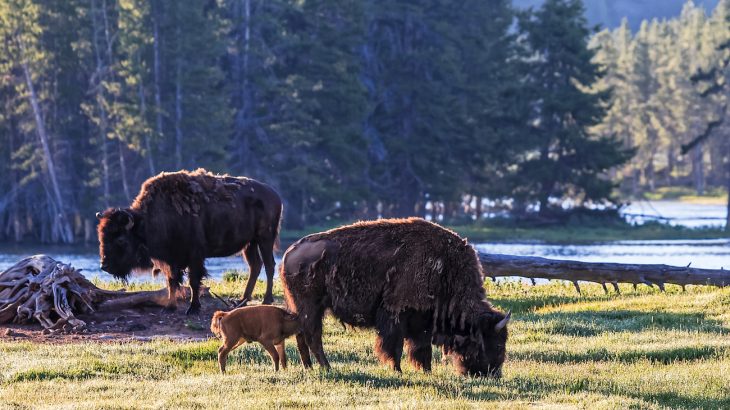 This month, footage of a nine-year-old girl being thrown in the air by a charging bison went viral online. The incident is just one of the many examples of the risks in interacting too closely with wildlife.

The incident occurred on July 22 near the Old Faithful Geyser in Yellowstone National Park, according to the National Park Service. A group of approximately 50 people were crowding the bison, standing within 5 to 10 feet of it for at least 20 minutes before it attacked.

The National Park Service states that the incident is still under investigation but does warn visitors to be respectful of the wildlife and give them space.

Large animals such as bison, elk, bighorn sheep and moose should be given at least 75 feet of space from people while bears and wolves need at least 300 feet, the service states. This basic precaution both protects people and allows wild animals to perform their natural behaviors undisturbed by humans.

The incident at Yellowstone National Park occurred shortly after a video depicting a man getting kicked by a horse went viral online. The video was shot at Assateague State Park in Maryland which is known for its herd of wild horses. In the video, a man attempts to pet a horse on the beach as the horse walks away. The horse then kicks the man in his stomach causing him to fall to the ground.

According to the Maryland Department of Natural Resources, the horses are wild and do not behave like domesticated animals. Visitors are urged to stay at least 40 feet away from the horses at all times.

Both incidents showcase the risks of interacting with wildlife firsthand. Thankfully, no one was seriously injured in either of the videos but it does not always end that way. Although humans can become injured during human-wildlife interactions, many times it is the animal who pays the ultimate price.

Last month Earth.com reported on a young bear who was euthanized in Oregon after becoming habituated to humans who fed him snacks and took selfies with him.

In 2016, a juvenile bison was euthanized after visitors in Yellowstone National Park put him in their car and brought him to a ranger station because he appeared to be in distress. Biologists attempted to reunite him with his herd but he was repeatedly rejected.

Both of the videos occurred at popular vacation destinations, which is perhaps unsurprising considering the large role wildlife watching plays in the tourism sector. As wild animals continue to soar in popularity with travelers, harmful interactions become all the more inevitable.

The answer to addressing human-wildlife interactions is unclear. Signs warning people to give wildlife space are often met with disregard. While viral videos of wild animals attacking humans are often difficult to watch, they might just help to illustrate the consequences of interacting with wildlife.