Bonobos are generous and share food with other communities • Earth.com 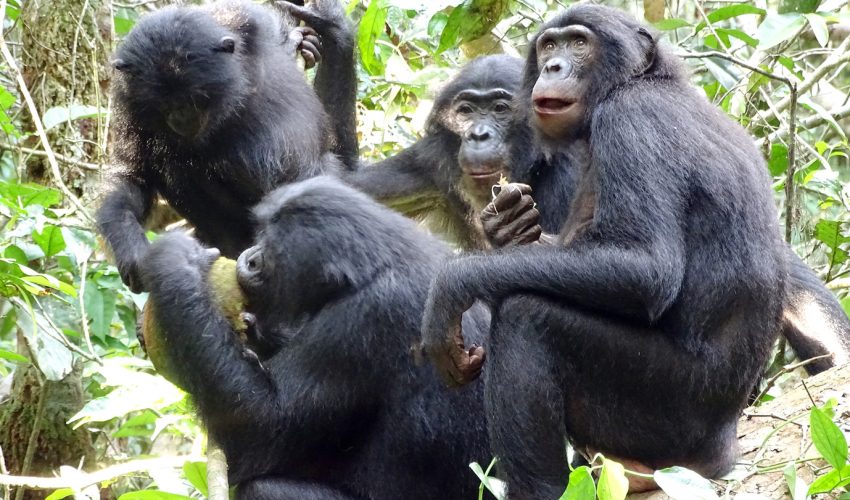 Bonobos are generous and share food with other communities

Scientists have discovered in recent years that bonobos apes are not only plant eaters but also hunt for meat to share with their communities. For the first time, researchers have discovered that these animals share their food with members of other social groups as well.

An international team of researchers witnessed the behavior in 2017 while studying bonobos apes in the Democratic Republic of the Congo. Two communities of apes, which were observed in a forest area near the Bompusa River, were found to hunt or eat meat about twice per month. Most of the time, they killed a small forest antelope called a duiker.

One afternoon, apes from the Bompusa West community met up with the Bompusa East bonobo community. When the alpha male of the western group caught a duiker, he moved into the top of a tall tree and passed out the meat to the awaiting females and their offspring from both communities.

Study co-author Barbara Fruth explained that the pieces of meat were immediately handed out.

“Solicitation involved behaviors such as peering and stretched out hands but no aggression or forceful taking. As in other cases, the transfer of food from the male to females was passive,” said Fruth.

Females are dominant in the social structure of bonobos apes, and this plays a major role in keeping the peace within a group.

The researchers observed how females rubbed their genitals together, even those from different groups, during the meat-feeding period. Grooming was also taking place between members of opposing groups, and one of the males mated with a female that was not in his social group.

“No aggression was observed among females, between males and females, or among males, a behavior not uncommon during other inter-community encounters,” said Fruth.

“Scrutiny of these behavioral patterns in our closest living relatives, the chimpanzee and the bonobo, provides potential insights into how our last common ancestor may have acted when dividing food with others.”

The study is published in Springer’s journal Human Nature.