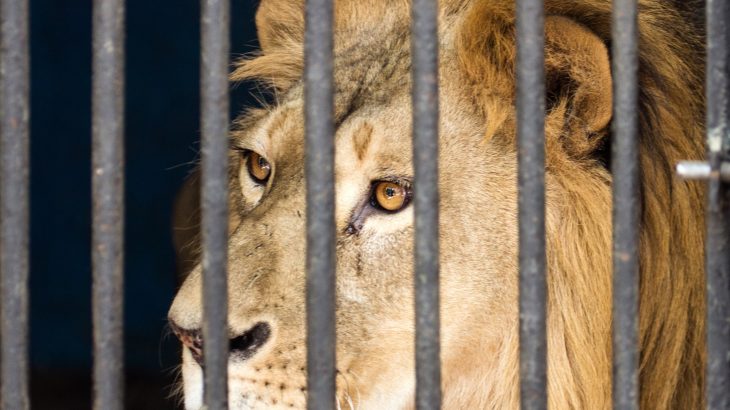 Lions stuffed into tiny cages, awaiting their deaths in a blood-stained slaughterhouse. It’s a scene that only sounds plausible in a horror movie. But this is reality for lions living in a captive breeding facility in South Africa.

This, and other revelations, were recently released in an investigation by Lord Ashcroft, former United Kingdom politician and philanthropist.

As we previously reported, up to 12,000 lions live in captive breeding facilities in South Africa, the only country that permits large-scale captive breeding of lions and sets an annual quota for legal exports of lion bones.

Lions are intensively bred in captivity for tourist attractions and subsequently killed for profit. At the facilities, cubs are taken away from their mothers within hours of being born. The cubs are used to draw in unknowing tourists and volunteers who believe they are helping to raise orphaned cubs. When the lions become too large for human interaction, they are often killed for the lion bone trade or sold to canned hunting facilities where they are shot in enclosed spaces.

The investigation, appropriately named Operation Simba, provides new insight into this disturbing industry. Investigators found that over 50 lions were slaughtered for their bones at one facility in a two-day period.

“Lions were kept in tiny cages and suffered appalling conditions in this farm’s blood-stained slaughterhouse before their deaths. Horrific pictures showed lion skeletons and innards littering the floor, while discarded internal body parts were piled high in overflowing black plastic bags on a trailer outside,” the the report reads.

Breeders are also believed to be purposefully cross-breeding lions with tigers to create hybrids that would sell at a higher price. These crossbred animals, called either ligers and tigons depending on the species of the male and female, often suffer from health defects, cancer and cleft palates. Ligers, the offspring of a male lion and female tiger, are at a high risk of gigantism which can cause their internal organs to give out due to their unnatural size.

“The UK representative of a South African safari company advised an undercover investigator posing as a hunter how he could bypass a US ban on importing captive-bred lion trophies. He suggested first importing it to the UK – where such imports are not banned – before hiding the lion’s skin inside the skin of a dead red deer and moving it on to America,” the report explains.

The investigation follows the seizure of lion cubs from a captive breeding facility in South Africa. Inspectors with the National Council of the SPCA found two lion cubs who were unable to walk, believed to be suffering from a neurological condition. In addition, inspectors note that big cats were subjected to overcrowding, mange, lack of water and parasitic conditions, Times Live reports.

Animal advocates and wildlife conservationists have long decried the captive lion breeding industry in South Africa. In November 2018, a committee of South African lawmakers called on the Department of Environmental Affairs to “initiate a policy…with a view of putting an end to this practice.”

The Department of Environmental Affairs has since announced that “the Minister intends to appoint High-Level Panel to Review Policies, Legislation, and Practices relating to matters of elephant, lion, leopard and rhinoceros handling, management, breeding, hunting, and trade.”

But there have been no moves to end the industry altogether. According to the department’s own numbers, nearly 40% of facilities were non-compliant with regulations. Many facilities were also operating with expired permits yet the vast majority of permits were reissued without penalties or justifications, The South African reports.

Lord Ashcroft is now calling on the South African government to prohibit captive breeding facilities and the UK government to ban the importation of captive lion trophies.

Captive lion breeding facilities have existed in the shadows for years, but as the cruelties of this industry come to light the industry might finally meet its fate.